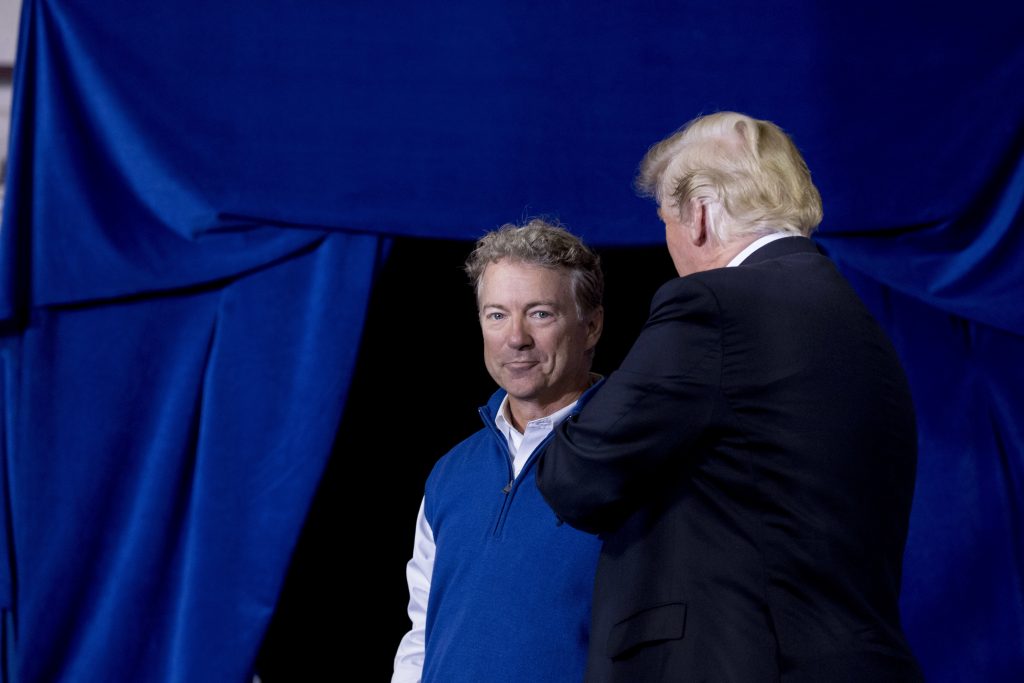 “We stuck with him all the way because we knew the facts,” Trump said, speaking of himself and McConnell, Kentucky’s senior U.S. senator.

“There’s nobody tougher. There’s nobody smarter. He refused to cave to the radical Democrats’ shameful campaign of personal and political destruction,” Trump said at a political rally at Eastern Kentucky University before he called McConnell to the mic.

“He stared down the angry left-wing mob. He never blinked and he never looked back and he got us a man who will be one of our great, great Supreme Court justices,” Trump said.

McConnell returned the compliment and told the president to continue nominating judges and “we’ll keep confirming them.”

Protesters swarmed Senate office buildings and hundreds were arrested in a futile attempt to intimidate a handful of holdout senators into voting against confirming Kavanaugh. Trump has taken to referring to Democrats who opposed Kavanaugh as an angry “mob.”

The president flew to Kentucky to campaign for three-term Republican Rep. Andy Barr, who is facing a strong challenge from Democrat Amy McGrath, a retired Marine fighter pilot, in one of the country’s most-watched House races.

Democrats are focusing on the seat in their drive to regain control of the House. Former Vice President Joe Biden became the highest-profile Democrat to campaign for McGrath when he came to Kentucky on Friday night.

Trump told the rally that a vote for Barr “could make the difference between unbelievable continued success” or failure, and pleaded with his supporters to vote on Nov. 6 to send more Republicans to Congress.

“The only reason to vote Democrat is if you’re tired of winning,” he said. “I need you to get your friends, get your family, get your neighbors, get your co-workers and get out and vote for Andy Barr,” Trump said.

The president sounded familiar themes during the hour-plus rally, touting the economy’s performance, a new trade agreement with Canada and Mexico, and his plan for a new military branch devoted to outer space, among a host of other issues that led the crowd to cheer him.

He again panned journalists as the “fake news media” and suggested he could live without their attention.

“I’d like to walk into a place one night and not have any of these guys,” Trump said.

With just over three weeks before Election Day, Saturday’s rally was part of an aggressive fall campaign push by Trump to energize Republicans and encourage them to help keep his legislative agenda moving forward by voting to keep the GOP in control of both houses of Congress.

In fact, even before Trump left the stage on Saturday night, his campaign announced a three-state Western swing through Missoula, Montana; Mesa, Arizona; and Elko, Nevada, next Thursday through Saturday.