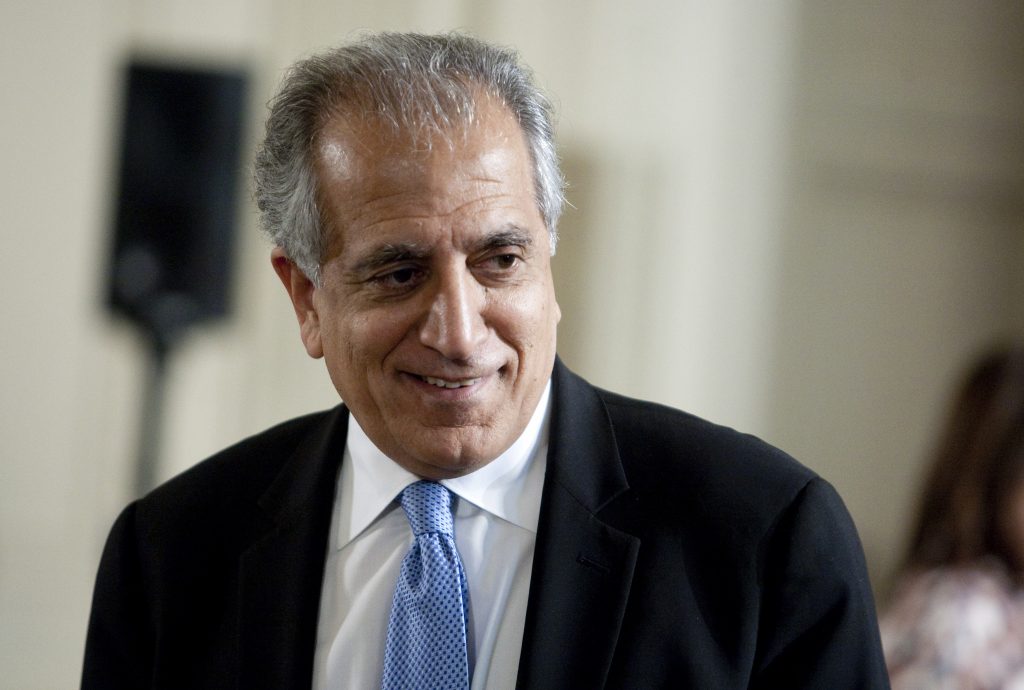 The Trump administration’s special adviser on Afghan peace met this week with Taliban representatives in Qatar, a spokesman for the insurgent group said Saturday, in talks that included possible paths toward a “peaceful settlement” of the war.

The spokesman, Zabiullah Mujahid, said the presence of foreign troops remains the main hurdle to peace. But he noted that both sides agreed to continue the dialogue – a potentially major step toward opening channels with the Taliban to end the 17-year conflict.

The U.S. Embassy in Kabul said in a statement that U.S. envoy Zalmay Khalilzad held “consultations” this week in Islamabad, Riyadh and Qatar’s capital, Doha, but did not confirm the reported meeting with Taliban officials.

The statement said Khalilzad returned to Kabul for follow-up meetings with Afghan President Ashraf Ghani and other officials, as well as Afghan political leaders and civic groups, “to hear their views and priorities on a settlement to the conflict.”

The reported talks by Khalilzad would mark another significant outreach to Taliban representatives in Qatar, which has sought to act as a mediator to bring together both sides for meetings.

Khalilzad’s reported meeting came midway through his first mission to the region since being named Washington’s point man on Afghan peace last month.

He first visited Kabul and Islamabad, the Pakistani capital, early this week, then vanished from public view and returned to Kabul on Saturday for meetings with top government officials and other groups.

His published schedule also included visits to Saudi Arabia and the United Arab Emirates this week, but U.S. officials also have not commented publicly on those.

A tweet from Ghani’s office Saturday confirmed that Khalilzad had returned here to brief him and other officials, but gave no details.

An explosion at a campaign rally in northern Takhar province Saturday killed at least 13 people and wounded several dozen more. No group claimed the bombing, but the Taliban warned last week that they would seek to disrupt the elections, and more than 300 people have died in election-related attacks in the past month.

Khalilzad’s public one-day visit Monday to Pakistan was a disappointment, resulting in little more than platitudes and photo ops. Officials there were polite but cool, and Pakistan’s foreign minister stated in Washington that Khalilzad – who once suggested that the country be declared a terrorist state – needed to be more “restrained” and “sensitive,” given his new role.

Pakistan has long said it seeks peace and stability in Afghanistan, but Afghan and U.S. officials have accused it of covertly sheltering anti-Afghan militants, and the Trump administration has suspended several hundred million dollars in military aid to the country. A key part of Khalilzad’s new assignment it to persuade Pakistan to actively back revived peace talks with Kabul.

In Afghanistan – where Khalilzad was born and served as U.S. ambassador in the early 2000s – his previous diplomatic tenure was marred by accusations of ethnic bias and political strong-arming.

But this week, his pro-peace agenda earned a cordial reception. Ghani has been seeking to revive talks with the Taliban for months, and hopes for a breakthrough soared after a successful, first-ever three-day truce in June.

Khalilzad told journalists here Monday that he had urged that both Afghan and Taliban leaders name members of negotiating teams. He said the United States would be happy to participate in any talks, but that the peace process should remain “Afghan-owned.”

His message stood in sharp contrast to Erik Prince, the American security contractor who visited Kabul two weeks ago to promote privatizing the armed conflict.

In an interview on Afghan TV, the former Blackwater chief boasted that his paid fighters could turn around the war in six months. Afghan reaction to Prince’s overtures was uniformly negative, and senior U.S. military officials have also strongly criticized the idea.

“In some respects, Khalilzad is the perfect person for this job,” said Michael Kugelman, an expert on Pakistan and Afghanistan at the Woodrow Wilson International Center for Scholars in Washington.

“He understands the terrain, the politics, and the state of play in Pakistan and the region,” Kugelman added. “Still, he has taken some critical positions toward Pakistan. It would be difficult for him to earn the goodwill that will be necessary to make headway with Islamabad.”

During a visit to Washington this month, Pakistani Foreign Minister Shah Mahmood Qureshi told an audience at the U.S. Institute of Peace that Khalilzad needs to be “more sensitive to opinion in Pakistan” in his new post.

“As individuals we can say what we want, but once you have an official position you have to be more restrained and sensitive, because only then can you be an honest broker,” he said.

Several analysts said that even if Khalilzad manages to improve ties with Islamabad, the role of other regional powers, including Russia and Iran, is now paramount in settling the conflict, and that gaining their support for peace talks will take more than one-man shuttle diplomacy.

“Mr. Khalilzad cannot do a lot,” said Ahmad Zia Rafat, a university professor in Kabul. “The Afghan crisis cannot be settled through one individual’s initiative. We need unanimity and coordination among regional and international actors as to how to solve it. The question is, are the main players – such as the U.S., Iran, Pakistan, India, China and Iran – ready for peace here or not?”

Kugelman emphasized that even within Afghanistan, there are numerous obstacles to Khalilzad’s goal of prodding the Taliban toward peace talks – especially since the insurgents continue to wage fierce attacks across the country and dominate terrain in numerous areas.

“There’s reason to be optimistic about his diplomacy right now, but we shouldn’t overstate his ability to move mountains,” Kugelman said. “No matter how hard he tries – and no matter how hard other countries try, the fundamental question remains the same: how to convince the Taliban to stop fighting when it thinks it’s winning the war.”