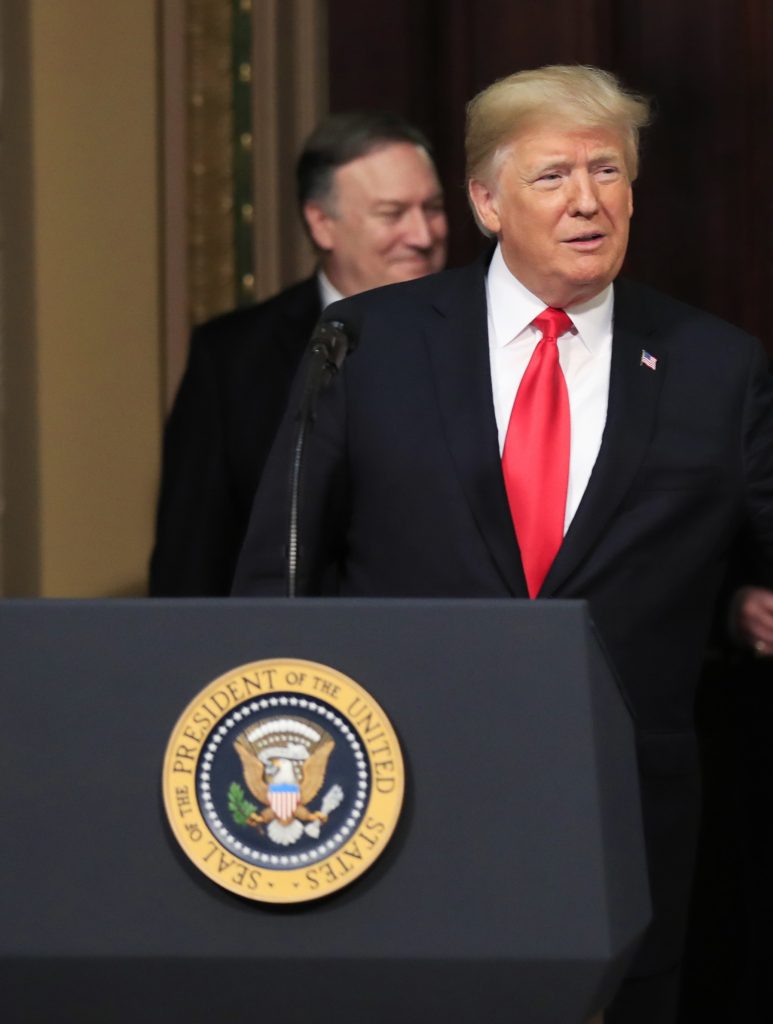 Michael made landfall in the Florida Panhandle on Wednesday as a “potentially catastrophic” Category 4 hurricane — the strongest on record to hit the area — and charged north through Georgia and into the Carolinas, wreaking havoc and causing emergencies. In the storm’s wake lay crushed and flooded buildings, shattered lives and at least two deaths.

Tyndall is located just east of Panama City, which endured punishing winds and took intense rain from the storm.

“At this point, Tyndall residents and evacuated personnel should remain at their safe location,” said Col. Brian Laidlaw, 325th Fighter Wing commander. “We are actively developing plans to reunite families and plan to provide safe passage back to base housing.”

Michael’s winds topped 150 miles per hour. No injuries have so far been reported, the base said, but the condition of Tyndall’s runway is not yet known.

Tyndall’s mandatory evacuation order was declared Monday, and it remains in effect. The 600 families who live on base were offered space in local shelters.

“Initial assessments of the damage at Tyndall Air Force base have identified severe damage to the base infrastructure,” according to an Air Force official. “There is no power, water or sewer service to the base at this time. All personnel assigned to ride out the storm are accounted for with no injuries. The Air Force is working to conduct aerial surveillance of the damage, to clear a route to the base and to provide security, potable water, latrines and communication equipment. The base will remain closed and Airmen assigned to Tyndall should not plan to return at this time.”

President Donald Trump approved disaster requests for Georgia and Florida stemming from the hurricane, moves that authorize federal authorities to coordinate response efforts while also opening up federal funding to officials in those areas.

The White House said President Trump declared a major disaster in Florida, while FEMA said that he had signed an emergency declaration for Georgia. In remarks Thursday, Trump addressed the hurricane, noting that it had swept through the area quickly.

“The big problem with this hurricane was the tremendous power, and fortunately it was very fast,” he said Thursday. “It went through Florida very, very quickly.”

Trump also defended his decision to hold a political rally in Pennsylvania on Wednesday night, an event that occurred while the storm, then still packing hurricane-force winds, was still churning through the Southeast, saying that he could not disappoint the people already in line.

Although Michael has weakened, but it continued to batter the Southeast and the impact will continue to spread in the coming day.

Forecasts now call for Michael to sweep across the Carolinas and then southeast Virginia through the day, dropping up to seven inches of rain in some areas, which could lead to flash flooding. Other areas could see up to three inches of rain, but more than twice that amount could fall in a swath from Charlotte to Richmond and on to Salisbury, Maryland.

Just as they did last summer in Texas during Hurricane Harvey and last month during Hurricane Florence, several groups of grassroots, ragtag search-and-rescue teams have arrived in Michael’s wake.

But this time, even the experienced Cajun storm chasers say they are more cautious due to the number of downed trees and telephone poles.

“This one just looks like a bomb dropped,” said Clyde Cain, a self-described admiral with the Louisiana Cajun Navy. “This one is so powerful that my guys are having to use chain saws to cut through downed trees to get into the neighborhoods. This one is just real bad, and no one saw it coming. We were just recovering from Florence.”

Cain, who was at a command center they set up in Mobile, Alabama, said he’s been so busy after Hurricane Florence that “my mama still hasn’t seen me.” He said he was warning his guys this time to be even more careful, “there are a whole lot of telephone poles dropping. This one is just real dangerous.”

As the remnants of Michael began to spread across North Carolina, state officials warned Thursday morning that residents were feeling an impact that would only worsen. Tens of thousands had lost power, at least 16 roads were closed, dozens of school systems were shuttered and three rivers were poised for moderate or major flooding, authorities said.

Democratic Gov. Roy Cooper offered his thoughts for the other states that bore the brunt of the storm, something that North Carolina is grimly familiar with after Hurricane Florence delivered deadly flooding last month.

“People in North Carolina know all too well what that feels like,” he said to his neighbors to the south. “For North Carolina, Michael isn’t as bad as Florence, but it adds unwelcome insult to injury, so we must be on alert.”

The National Hurricane Center said that shortly before 11 a.m., the center of Michael was about 35 miles away from Charlotte and “producing heavy rainfall and tropical-storm-force wind gusts” across much of the central and eastern parts of both Carolinas.

Tropical-storm-force winds extend up to 185 miles from the storm’s center, mostly to the south and east, with a wind gust of 54 mph reported in South Carolina.

“On the forecast track, the center of Michael will continue to move across central and eastern North Carolina today, move across southeastern Virginia this evening, and move into the western Atlantic Ocean tonight,” the hurricane center said.

FEMA chief William “Brock” Long said that Mexico Beach, Florida, not far from where Michael made landfall, appeared to be “ground zero” of the storm’s impact.

Still, Long noted that authorities still had not “been able to get in and truly assess” the damage, which he said would take some time over the next two days.

Long warned people in the region to expect a long-lasting impact from the storm, which spent much of Wednesday battering Florida before it thundered north across Georgia and South Carolina. He pointed in particular to the power outages affecting hundreds of thousands of people across Florida, Georgia, Alabama and the Carolinas, saying that it could take weeks for the lights to come back on everywhere because of the damage.

“It’s not just power lines being down, it’s transformers that are down, it’s substations that have been impacted,” Long said. “This is not stuff that you just put back together overnight.”

There was a sliver of good news, Long said: Officials were not expecting additional flooding in the parts of the Carolinas that suffered flooding during Hurricane Florence.

But some parts of the coastal Carolinas were facing a threat of storm surge, he said, warning people in the area: “It’s not over.”

Florida Republican Gov. Rick Scott on Thursday morning urged Floridians to remain cautious even as remnants of Michael moved north, saying that the storm’s aftermath could pose a threat to people in the Florida Panhandle region.

Scott said he remains concerned about people who did not evacuate during the storm. As of Thursday morning, he said the state has confirmed only one fatality due to the storm; Georgia has also reported one death from the storm.

“Hopefully everybody made it through the storm,” Scott said. “Be safe. There’s downed power lines; don’t touch them. There’s a lot of trees down; don’t get injured. If you’re going to use a generator, make sure you know how to use it properly.”

He added: “We will recover and we will do it together.”

Scott noted that the storm came on quickly and left just as rapidly after tearing through Florida for much of Wednesday. “I know this thing came up fast,” he said.

Still, he pleaded again with people who evacuated coastal communities not to return yet, saying: “Everyone needs to stay off the roads.”

The storm knocked out power to more than 754,000 across the Southeastern United States, with more than half of those outages occurring in Florida, where Michael first made landfall Wednesday as a powerful system.