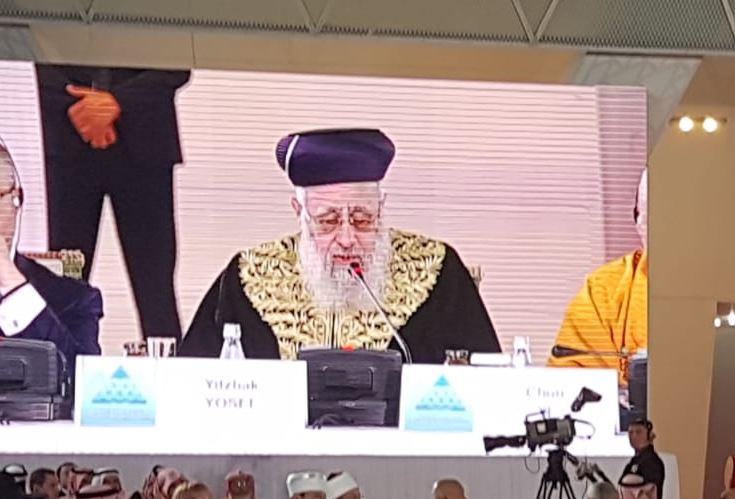 Kazakhstan hosted for the sixth time the Congress of the Leaders of World and Traditional Religions, which traditionally issues messages of peace, mutual respect and tolerance.

The two-day event, held on Wednesday and Thursday, opened in its traditional venue, the Palace of Peace and Reconciliation, a surrealistic, specially built building in the form of a pyramid where the first such Congress was held in 2003.

The congress is held every three years and this year’s event was marked with the headline “Religious Leaders for a Safe World.” The congress is an initiative of Kazakhstan’s autocratic leader President Nursultan Nazarbayev.

In a fiery speech on Wednesday, Sephardi Chief Rabbi Harav Yitzchak Yosef confronted the world’s religious leaders and accused them of failing to condemn terror attacks, saying that silence after such acts was akin to condoning them.

“When there are terror attacks, our voice as spiritual leaders must be heard strongly and proudly,” Harav Yosef told the audience, which included dozens of religious leaders from various countries including the United States, European nations, Iran, South Korea and Saudi Arabia.

“It is forbidden for us to remain silent; silence is tantamount to identifying with terror,” he declared.

The Chief Rabbi’s speech was met with lengthy applause, and many leaders then came up to him and thanked him for his words.

Harav David Lau spoke of the religious freedom in Israel. “In Jerusalem, all religions are represented in the best possible way and out of mutual respect. When I pray at the Kosel, Jews and non-Jews from all over the world pray alongside me.”

He also mentioned the terror attack earlier this week. “On Sunday, a heinous murder took place in the Barkan industrial zone, a symbol of coexistence between Jews and Palestinian Authority residents, who work side by side. Two Jews were killed by their co-worker just because they were Jews. Unfortunately, we have not yet heard a resolute condemnation from religious leaders for this. It is the task of all of us at this time to return to our homelands and educate for peace and mutual respect, and when we succeed, I am certain that actions in this direction will reduce hostilities and terror across the world.”

Harav Yosef and his colleague Ashkenazi Chief Rabbi Harav David Lau arrived in Kazakhstan on Tuesday night and were greeted by members of the local Jewish community, including Kazakhstan Chief Rabbi Yeshaya Cohen.