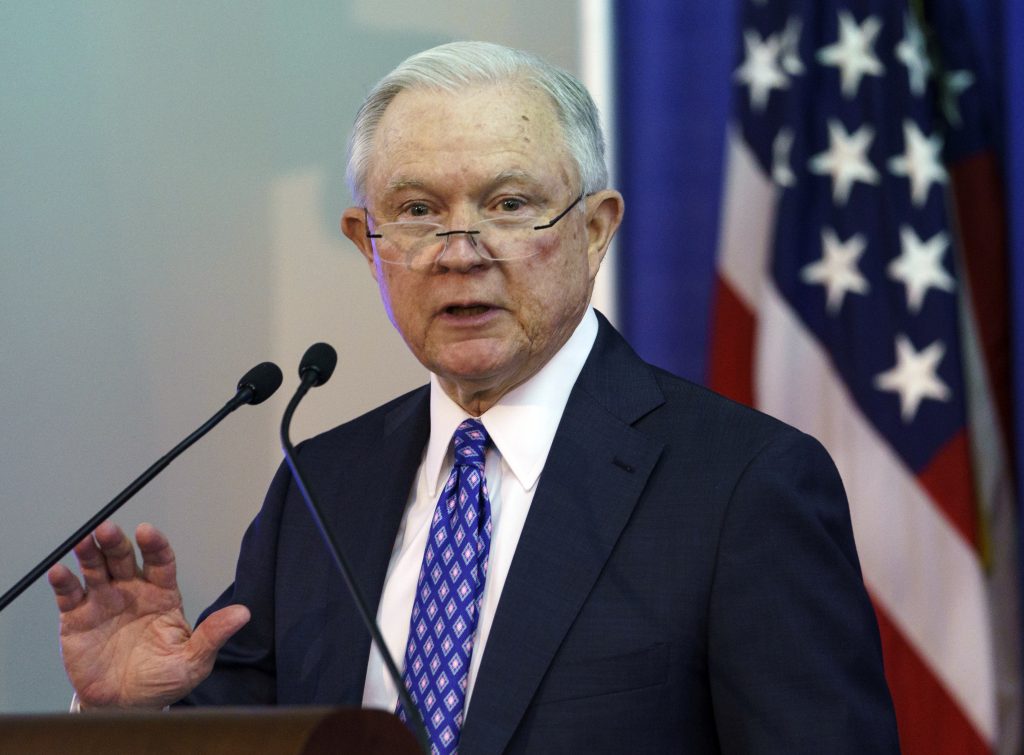 Once again wading into the contentious battle over policing and violent crime in Chicago, U.S. Attorney General Jeff Sessions on Tuesday announced he would file a statement in federal court opposing the proposed court order that would force sweeping changes to the city’s Police Department.

Sessions revealed his plan weeks before a federal judge is scheduled to hear public comments on the proposed consent decree, a court order that would mandate reforms overseen by an independent monitoring team. The decree would likely stand as one of the most significant consequences of the push for police reform sparked nearly three years ago with the release of the video of Officer Jason Van Dyke shooting Laquan McDonald 16 times.

On Friday, Van Dyke was convicted of second-degree murder and 16 counts of aggravated battery.

The written announcement from the Department of Justice referenced another controversial oversight deal governing policing in Chicago — the agreement between the American Civil Liberties Union of Illinois and the city that required cops to more thoroughly document street stops. Sessions argued that the deal led to a spike in homicides.

“Chicago’s agreement with the ACLU in late 2015 dramatically undercut proactive policing in the city … with homicides increasing more than 57 percent the very next year,” Sessions said in the statement.

“Now the city’s leaders are seeking to enter into another agreement. It is imperative that the city not repeat the mistakes of the past — the safety of Chicago depends on it. Accordingly, at the end of this week, the Justice Department will file a statement of interest opposing the proposed consent decree. It is critical that Chicago get this right.”

A “statement of interest” is a mechanism the Justice Department has used to weigh in on legal cases, but such statements carry no inherent legal weight, according to lawyers familiar with those documents. They resemble amicus briefs, which lawyers can file in an effort to sway a judge’s view of a case, attorneys said.

The forthcoming consent decree is a product of a Justice Department investigation initiated shortly after the city was forced in November 2015 to release a video of Van Dyke, a white police officer, shooting McDonald, a black teenager who was carrying a knife. The video led to heated street protests fueled by long-standing anger among African-Americans over their treatment by police.

In January 2017 — the waning days of an Obama administration that often sought to intervene in local police departments — the Justice Department issued a report portraying CPD as a broken institution plagued by bad training, lax supervision and rare discipline for cops. Mayor Rahm Emanuel agreed to work toward a consent decree.

But then Trump took office and appointed Sessions, who has criticized federal intervention in local law enforcement. Emanuel announced he would try to negotiate an out-of-court agreement to overhaul the Police Department — a move blasted by reform advocates who said a federal judge’s oversight was needed to bring lasting change to the force.

In August 2017, Illinois Attorney General Lisa Madigan sued the city to force a consent decree and the mayor agreed to negotiate. Groups including Black Lives Matter Chicago and the ACLU also sued seeking changes, and the Emanuel administration and Madigan’s office reached a deal giving those groups a role in guiding the eventual consent decree.

The city and Madigan’s office have submitted a proposed decree that would aim to create tighter restrictions on use of force, closer supervision of officers and a more effective disciplinary system, among other policy changes. U.S. District Judge Robert Dow Jr. has scheduled court hearings for late October, at which the public can comment on the prospective order.

Madigan spokeswoman Maura Possley noted in a written statement that Sessions plans to weigh in against a court order grounded in the findings of the department he now runs.

“As the Justice Department found after an extensive investigation, Chicago residents and police officers have endured decades of serious problems that have endangered too many lives,” she said. “It’s not surprising that this Justice Department is opposing real reform.”

“The Trump Administration never ceases to amaze, and this is just further proof that they are out of step with the people of Chicago and out of touch with reality,” the statement said.

Sessions’ opposition to the consent decree dovetails with the perspective of the union that represents rank-and-file officers, the Chicago Fraternal Order of Police, which has sought unsuccessfully to have the litigation dismissed. Union President Kevin Graham could not be reached for comment.