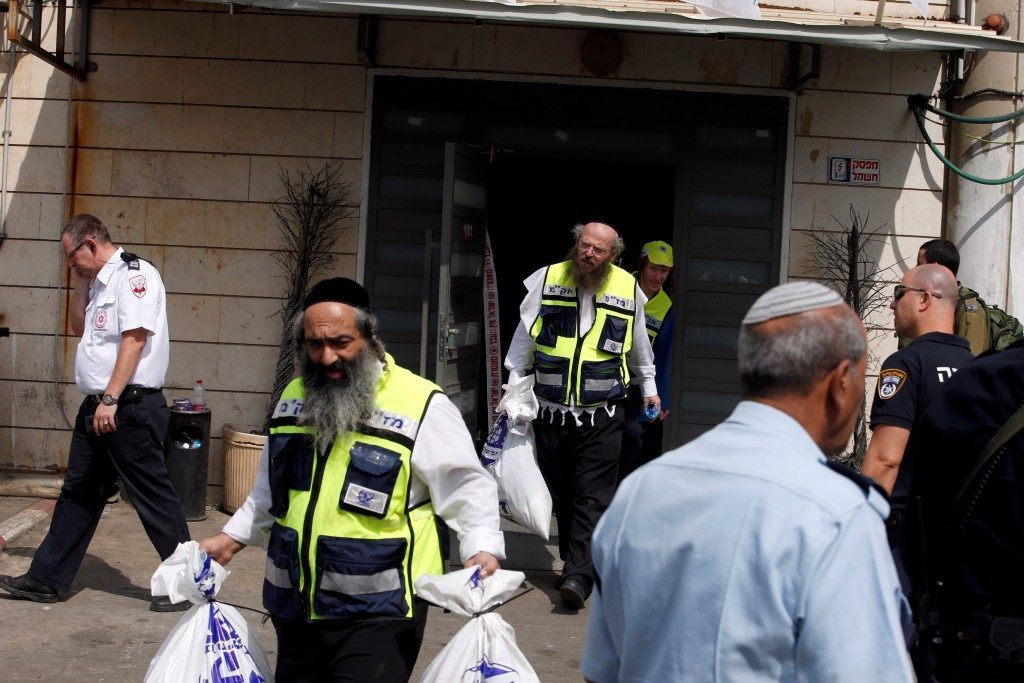 Other lives were also changed forever when a terrorist entered the offices of the Alon Group in the Barkan Industrial Park and opened fire: Kim’s bereaved husband, Ziv’s widow, their parents and relatives.

Of course, it isn’t Mrs. Hagbi who did anything wrong, but a list of others, beginning with the murderer himself, Ashraf Walid Suleiman Na’alowa. He arrived at the factory armed with a locally produced Carlo-style submachine gun and proceeded to the administrative offices, where he tied up and killed Yehezkel, along with Hajbi, and wounded a 58-year-old woman.

The Barkan Industrial Park, located near Ariel, is supposed to be a model of coexistence. It employs some 4,000 Palestinian Arabs, including Na’alowa, an electrician who worked for the Alon Group, which manufacturers waste-management systems.

The theory goes that an employed Palestinian, who has been given the opportunity to earn a decent wage and support his family in dignity, won’t subscribe to radical Islam. “My boss always said that every Palestinian he hires means fewer terrorists,” said a coworker of Levengrond Yehezkel and Hagbi. Tragically, in this case the theory and the boss were proven wrong.

Na’alowa reportedly knew his victims, who were both praised for their goodness, but that didn’t stop him from tying them up and shooting them.

Another guilty party is the Palestinian Authority, which encourages terrorism by paying honor and hard cash to terrorists. Only a morally perverse society names city squares after mass murderers of women and children. Only a corrupt government with no values diverts scarce resources from schools, hospitals and job-creation projects to fund terrorism, paying monthly stipends to killers and their families and inciting to terror in the media, schools and mosques.

Also indirectly responsible for this outrage is Europe’s traditionally pareve response to terror, at least when the victims are Jews.

In response to Sunday’s attack, EU Ambassador to Israel Emanuele Giaufret wrote: “Following the developing news on the attack in Barkan industrial area in the West Bank this morning. My condolences to the families of the victims. May the perpetrator be brought to justice. Violence can never be condoned.”

“Violence can never be condoned” is reminiscent of European responses to bus bombings in Yerushalayim in years past that blamed the amorphous “cycle of violence” for the deaths of Jews.

“EU again condemns terrorist murders of innocent Israelis by saying ‘violence can never be condoned,’” wrote Deputy Minister of Diplomacy Michael Oren, a former Israeli ambassador to Washington. “The EU never says that when terrorists kill Europeans. Could it be that the EU agrees with the Palestinian terrorist’s motivations, just not his methods?”

Contrast Giaufret’s response to that of U.S. Ambassador David Friedman: “The Barkan Industrial Zone has been a model of Israeli-Palestinian coexistence since 1982, with thousands working and prospering together. Today a terrorist shattered that harmony by brutally murdering two Israelis at work. Our deepest condolences to the families of the victims,” Ambassador Friedman stated.

The shocking murders Sunday morning, and the trail of grief they left in their wake, require firm action against the killer and his family. Shortly before embarking on his murderous spree, Na’alowa posted that he was “waiting for [Al-ah].” The security forces will undoubtedly investigate what his family knew and when, and take appropriate action, including destroying their home.

Our thoughts are with the victims and their families, may they be comforted among the mourners of Zion.

Levengrond Yehezkel had finished law school and was working as the secretary to the CEO as she prepared for her bar exam. She was “all about giving, a wonderful mother,” recalled a friend.

Hajbi’s mother Iris said her son was “a pure and amazing soul who left behind three children and a wonderful wife.”

A friend, Asaf Dabul, said Ziv was “a model father, a model husband, a model son-in-law, a model son. He was a wonderful man whose life was cut short by a despicable murderer.