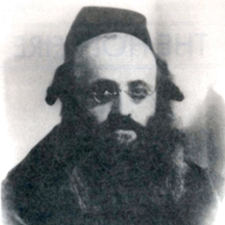 It was late at night, most of the lights in the hospital in Warsaw were extinguished, and the remaining ones were already flickering. Along with the darkness reigned a sense of despair.

Lying deathly ill in the hospital bed was Harav Elimelech Benzion Shapira, the only son of Harav Klonymous Kalman Shapira, the Piaseczner Rebbe.

At his bedside was his father, who was fully cognizant of the dire predictions of the doctors, who feared that his beloved son had only hours to live.

The Rebbe made a powerful effort to drive away any thoughts of melancholy, and filled his heart with emunah and bitachon.

“Ribbono shel Olam, Rachum v’Chanun,” he declared, speaking directly to Hashem, “From my childhood until now I have been filled with suffering. I was a tender child when my enemies, worries and troubles already shattered my strength and my spirit. I was an infant when I was orphaned. My father, the tzaddik, I almost didn’t get to know. I did not merit that my father, an ish Elokim, should raise me.

“Ribbono shel Olam, despite all this, I have no complaints or grievances against You, chas v’shalom. You are righteous in all Your deeds, and if not for Your kindness during all my distress, I would have perished in my afflictions.

“During all my troubles You save me, and now also, Hashem, I beg You — in the merit of Your great name and my holy ancestors, have mercy.”

Reb Elimelech Benzion miraculously recovered — only to be killed four short years later in a bombing at the beginning of World War II.

The Rebbe suffered tragedy after tragedy, loss after loss, but continued to fill his heart with emunah and to serve Hashem with every fiber of his being. Though he was well-aware of his probable fate, he not only continued to say divrei Torah — he continued to write them down.

At that time no one could understand for whom he was writing, but miraculously the manuscript survived and was published after the war. It was aptly titled “Eish Kodesh” — “Holy Fire.”

This incredible sefer is a powerful window into the mind of this spiritual hero during one of the most daunting periods known to man.

Virtually every teaching touches upon what he was experiencing and is filled with lessons of chizuk and emunah.

The Rebbe repeatedly stressed that man can reach levels greater than an angel, and that a malach can’t fathom the greatness of a Yid, nor can a Yid fully grasp his own greatness.

It is a lesson he so powerfully embodied.

In Parashas Noach, the Rebbe teaches that at a time of great challenge, when a person manages to continue to do mitzvos and serve Hashem with his hands, feet and lips, it is a madreigah in itself. But when an individual manages to use his mind and intellect to learn Torah despite the challenges and obstacles he faces, that is a most lofty level of a very positive trait of stubbornness. An angel does not have the ability to descend to this temporal world and emerge spiritually unscathed. Inevitably, he is adversely affected, and must go through a cleansing process before he can return to Shamayim.

In contrast, the neshamah of a Yid has the ability to be in this physical world, face seemingly insurmountable challenges, and remain so impervious to his surroundings that he can even use his intellect to serve Hashem!

The only One Who is never affected by circumstances is Hakadosh Baruch Hu. Thus, through cleaving to Hashem, we can rise above the circumstances we face, regardless of how daunting they may be.

In Parashas Shelach, the Rebbe teaches that there are times when a Yid finds himself in crisis and tzaarah, yet he sees a viable way out, a light at the end of the tunnel. There are other times so bleak that according to logic there seems no way out. One shouldn’t spend time wracking his brains trying to imagine a feasible way out of his tzarah at such times, the Rebbe says, for after all his efforts, he will still be unable to think of a way to save himself; this may adversely affect the level of his emunah. And since emunah is actually the conduit for a yeshuah, that could actually prevent the yeshuah.

Instead, the Rebbe urges that a Yid must strengthen himself with emunah peshutah that the Ribbono shel Olam can save him in ways above the realm of teva, without any sort of calculations how this is possible — and plead with Hashem to do so.

In his will, the Rebbe pleaded that his sefarim — including the divrei Torah he had written in the Warsaw Ghetto — be published and distributed among Klal Yisrael.

“I beg and plead with every one of [Klal] Yisrael to learn from my sefarim, and it is certain that the merit of my holy ancestors … will stand by him and his entire household in this world and in the World to Come…”

This Shabbos, the fourth of Cheshvan, marks three-quarters of a century since the Piaseczner Rebbe, Hy”d, was killed al-Kiddush Hashem in a Nazi death camp. Like so many of the Six Million Kedoshim, the Rebbe has no kever, nor did any of his children survive him.

But through his extant sefarim, his spiritual legacy continues to inspire Klal Yisrael.