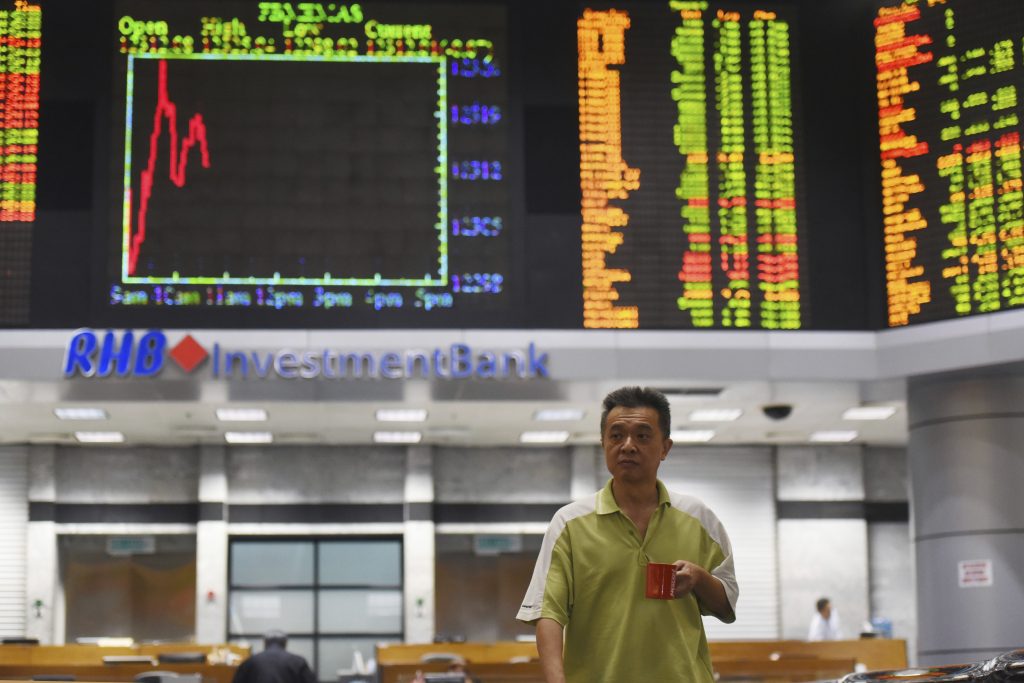 Asian shares hit 17-month lows on Tuesday as China allowed its currency to slip past a psychological bulwark amid recent losses in domestic share markets, a shift that pressured other emerging currencies.

The Pakistani rupee plunged about 5 percent in an apparent devaluation by the central bank, market participants said.

The IMF added to the malaise by cutting forecasts of global growth for both this year and next, including downgrades to the outlook for the United States, China and Europe.

“Risk sentiment is in a foul mood and stocks are sinking everywhere,” JPMorgan analysts said in a note.

“With Chinese economic momentum continuing to weaken alongside increasing pressure from the United States, currency weakness is the obvious release valve,” they warned. “A lurch through the 7.0 level by year end is possible.”

China’s central bank fixed its yuan at 6.9019 per dollar on Tuesday, so breaching the 6.9000 barrier and leading speculators to push the dollar up to 6.9120 in the spot market.

The drop should be a positive for exporters and did help Shanghai blue chips edge up 0.3 percent. Yet that follows a 4.3 percent slide on Monday which was the largest daily drop since early 2016.

MSCI’s broadest index of Asia-Pacific shares outside Japan went flat after ending Monday at its lowest point since May last year.

Japan’s Nikkei fell 1.3 percent, hurt in part by a rise in the safe-harbor yen.

On Monday, a senior U.S. Treasury official expressed concern at the fall in the yuan, adding that it was unclear whether Treasury Secretary Steven Mnuchin would meet with any Chinese officials this week.

On Wall Street, the tech-heavy Nasdaq had fallen for the third straight day on Monday and growth stocks were pressured by worries that rising bond yields might ultimately hobble the economy.

The S&P 500 lost 0.04 percent and the Nasdaq Composite 0.67 percent, while the Dow rose 0.15 percent as defensive stocks found buyers.

Treasuries have had a sort of safety net up to now as rising yields tend to dampen stocks and threaten the economic outlook, thus putting pressure on the Federal Reserve to go slow on policy tightening.

Yet recently the Fed has sounded so bullish on the economy and so hawkish on rates that the net has become frayed.

“The size and speed of the bearish bond impulse would suggest a collective shift in market thinking about the US growth prospects and policy projections,” said Damien McColough, Westpac’s head of rates strategy.

“The Fed’s expected 2019 profile has moved from just below 2 hikes to 2.5 hikes being factored-in.”

That shift has underpinned the dollar against a basket of currencies where it stood at 95.677, from a low of 93.814 just a couple of weeks ago.

Italy’s borrowing costs have surged as a war of words between Rome and the European Union over the country’s budget plans escalated.

The yield on Italian government 10-year bonds rose more than 20 basis points to 3.626 percent, the highest since February 2014, while Italy’s FTSE MIB stock index fell to its weakest since April 2017.

In commodity markets, gold got a modest safety bid at $1,191.10, having fallen 1.4 percent overnight.

Oil prices rose on Tuesday as more evidence emerged that crude exports from Iran, OPEC’s third-largest producer, are declining in the run-up to the reimposition of U.S. sanctions and as a hurricane moved across the Gulf of Mexico.