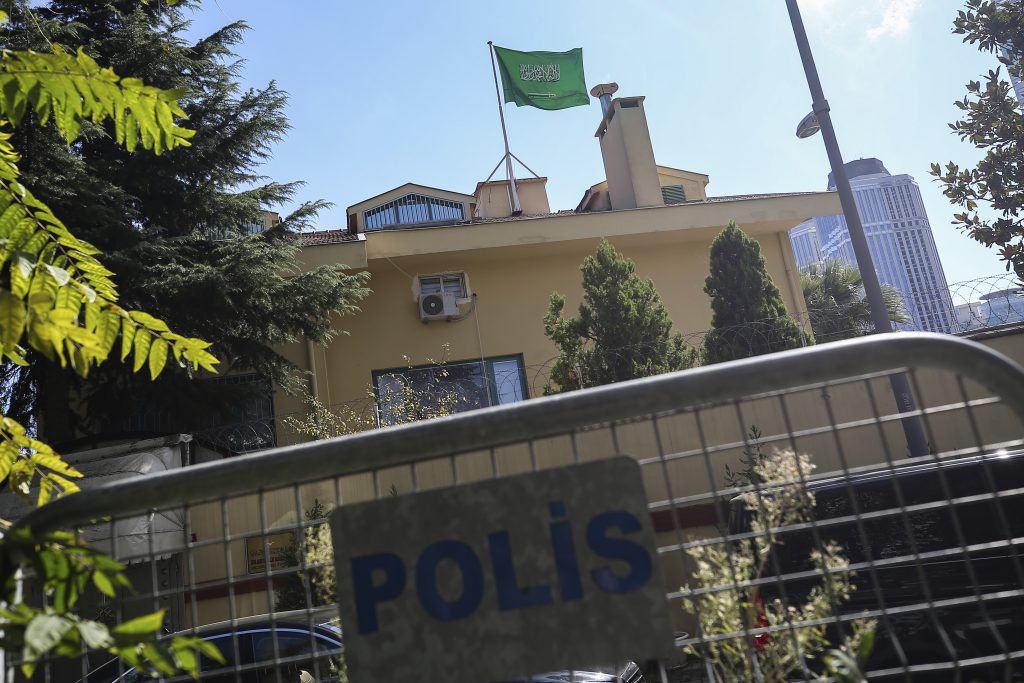 Turkey has summoned the Saudi ambassador to request the kingdom’s “full cooperation” in an investigation into the disappearance of journalist Jamal Khashoggi, who Turkish officials say was killed while visiting the Saudi Consulate in Istanbul.

The 59-year-old Khashoggi went missing last Tuesday while visiting the consulate for paperwork to marry his Turkish fiancée.

Turkish President Recep Tayyip Erdogan said the Saudis need to provide evidence to support their claim that he left the consulate.

“Consulate officials can’t save themselves by saying ‘he left here.’ And relevant authorities are obligated to provide proof of this claim,” Erdogan said during a visit to Hungary. “If he left, you must prove this, you will prove this, even if it’s with visuals. Those who ask Turkish authorities ‘where is he?’ should first be asking ‘how did this happen?'”

A Turkish official said the Saudi ambassador met with Deputy Foreign Minister Sedat Onal on Sunday at the ministry. The Turkish private NTV television said Ankara requested permission for Turkish investigators to search the consulate building in Istanbul, but a Foreign Ministry official would not confirm the report.

Turkish officials say the Washington Post contributor was killed at the consulate and that his body was later removed from the building, without providing evidence. Erdogan has said he would await the results of an investigation.

Saudi officials have denied the allegations as baseless. The consulate insists that Khashoggi left its premises, contradicting Turkish officials.

The Saudi writer spent last year in the U.S in self-imposed exile, after he fled the kingdom amid a crackdown on intellectuals and activists who criticized the policies of Crown Prince Mohammed bin Salman.

Khashoggi’s disappearance could put pressure on the Saudi crown prince, who has promoted an image of himself as a reformer and a reliable Western ally.

“Opposition to the young crown prince in the ruling family will most likely grow,” warned Ayham Kamel, the head of Mideast and North Africa research at the Eurasia Group. “There are elements of the Al Saud family that are convinced that the prince is reckless and compromising the security of the country.”

Turkey’s state-run news agency, quoting police, has said 15 Saudi nationals arrived in Istanbul on board two planes and were inside the consulate building when Khashoggi went missing. The private DHA agency said the planes, which it identified as two Gulfstreams belonging to a Riyadh-based company that hires private jets, landed at Istanbul’s Ataturk Airport on the day Khashoggi vanished.

Journalists and activists gathered outside the Saudi Consulate on Monday demanding information on Khashoggi’s fate.

“We would like to know exactly what happened inside the Saudi Consulate in Istanbul and the circumstances surrounding his disappearance,” said Mohamed Okad, a friend of Khashoggi and founder of Insight into Crisis, a conflict advisory group. “We demand from the international community to pressure Saudi Arabia and Mohammed bin Salman to tell us exactly what happened.”

Among the protesters was Tawakkol Karman, the Yemeni journalist and 2011 Nobel Peace Prize winner. She accused Saudi Arabia of “state terrorism” and called on the international community to take action against the kingdom. A Saudi-led coalition has been at war with Yemen’s Iran-aligned Houthi rebels since March 2015.