Business AUTO REVIEW: This Chevy Suburban RST Can Haul So Much More Than People
Business 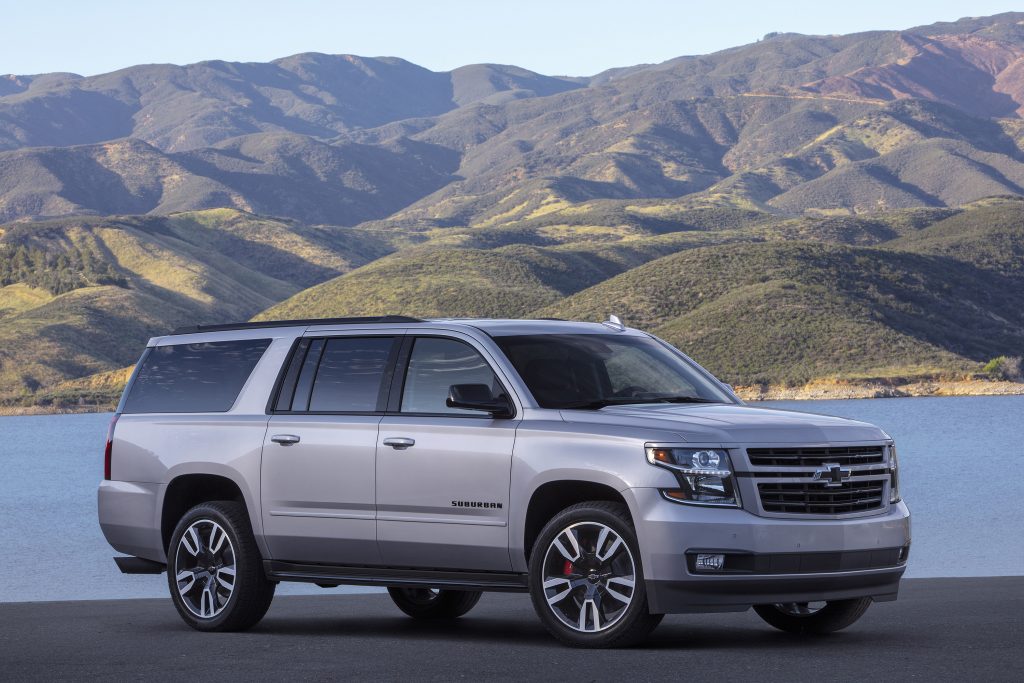 The 2019 Chevrolet Suburban RST is so far removed from the Chevy Suburbans of the past that it is a different classification altogether: the performance full-size SUV. If you can have performance trucks, why not giant SUVs?

The Suburban has been suburbing families and their stuff since 1935, making it the longest running nameplate in continual use. The Suburban of my past is a high school buddy’s rusted out powder blue on navy truck with ripped vinyl seats and a busted shock so it listed to one side and could haul the whole gang of teens, provided we chipped in for gas money. That was a Suburban, beat up, beloved, and running seemingly forever to its death.

By contrast, the 2019 Chevy Suburban RST is a sleek blacked-out night prowler capable of surprising agility and power from a small block V-8 engine like the one used in a Chevy Corvette. Except this vehicle is nearly 6,000 pounds. They say black is slimming so it has black wheels, black bumpers, black bow ties — black everything, even the lettering. It’s way too luxurious for any teen, too powerful for the suburban driver, and so ridiculously priced it’s meant for only the few.

At $82,000, it cashes in on the predominant promise in today’s new car market: you can have it all, for a price.

Last redesigned for 2015, Chevy’s venerable cash cow has been caught in the crosshairs of Ford’s impressive assault on the full-size SUV market. The luxury star of the segment is the $90,000 Lincoln Navigator, which rightly won 2018 North American Truck of the Year, and it’s more approachable cousin, the Ford Expedition, which provides a great balance of power and efficiency, advanced technology and towing capability. Those vehicles capture the attention of what full-size SUV drivers need.

The 420-horsepower RST is not about need; it’s about Chevy injecting some life in the Suburban before it gets redesigned for 2020.

The Rally Sport Truck trim, which appeared in the Tahoe last year, upgrades the engine to a 6.2-liter V-8 EcoTec with a more efficient 10-speed transmission capable of churning out 460 pound-feet of torque (the standard Suburban makes 383 pound-feet with the 5.3-liter engine and six speed trans). The throttle is light to the touch, making the full-sizer feel much smaller. It carries its weight like the big guy in high school who was surprisingly, effortlessly quick.

It also gets Chevy’s performance-oriented active suspension called Magnetic Ride Control, which is also used on Camaro and Corvette. The electronically controlled shocks are more sensitive, reacting quicker to road conditions and driver input than the standard setup. Yet, even with the 22-inch wheels, Suburban RST cruised on the highway with a soft smoothness like that of the Navigator.

We used the Suburban like how a Suburban is most often used: ferrying the kids around town on a long camping weekend. We packed plenty for that weekend, and since the forecast called for rain, we even brought other families’ pop-up canopies. Unlike the Cadillac Escalade, there was plenty of space. Suburban is one of, if not the largest, in terms of space, which is why I considered moving the kids and pup into the Suburban to sleep after the fourth hour of thunderstorms. But the kids slept through it.

Prior to that weekend, when the kids were at school, I appreciated the performance-minded capability but didn’t really care. It felt lighter than it should, it turned without the usual boat-like roll of a full-size SUV, but for real performance thrills I’d look elsewhere. It won’t pump the adrenaline, but it elicits a smile.

More impressive was Chevy’s already good technology. We averaged 19 mpg on the highway thanks to cylinder deactivation, which shuts down half of the eight cylinders while cruising. The entertainment package ($3,025), with screens that retract from the ceiling from the mid- and third-row, was well worth it. The off-center layout of Chevy’s truck functions, on the dash left of the steering wheel, took a minute to get used to, but it makes for an uncluttered center. The eight-inch touch screen needs to be larger, but that’s what the 2020 will be for. The layered vehicle info display limits any need to go poking and prodding the touch screen. Ford’s Sync3 won’t age as well as Chevy’s infotainment system. Something to consider if you plan on holding onto it as long as Suburbans of old.

Power third row is essential at this price point, and getting in and out of the seats and reconfiguring them is no problem. The Suburban doesn’t feel old, even though it’s due for a redesign. RST is overkill for me, but some people have to have all the stuff to keep them as far away from family minivan compromise as possible. I’m not convinced it’s $10,000 better than the Expedition Limited, and the performance upgrades don’t meet the overall package of the Navigator, but for people who need to haul the team and like to be in a hurry, the Suburban RST trim is a fit.

2019 Chevrolet Suburban RST at a glance