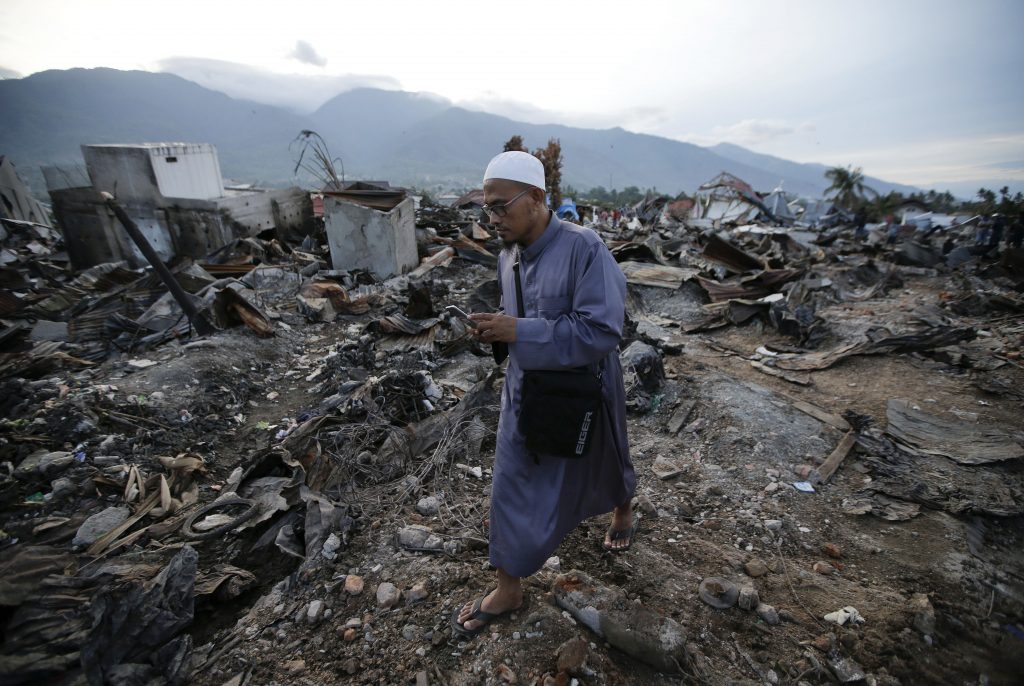 Relatives of hundreds of people missing after an earthquake and tsunami in Indonesia reacted with anger, sadness and resignation on Sunday to a decision by the state disaster agency to end searches for bodies later this week.

The 7.5 magnitude quake on Sept. 28 brought down shopping malls, hotels and other buildings in the city of Palu, while tsunami waves smashed into its beachfront. But perhaps more deadly was soil liquefaction which obliterated several Palu neighborhoods.

No one knows how many people are missing but it is at least in the hundreds, rescuers say.

The official death toll has risen to 1,763 but bodies are still being recovered, at least 34 in one place alone on Saturday and more on Sunday.

“Many of us are angry that we haven’t found our families and friends and they want to give up?” said Hajah Ikaya, 60, who says she lost her sister, brother-in-law and niece in the Balaroa neighborhood in the south of the city. They are all missing.

Balaroa was one of the areas particularly hard hit by liquefaction, which turns the ground into a roiling quagmire, destroying houses and dragging people under the mud and debris.

The disaster agency said earlier liquefaction destroyed 1,700 houses in one neighborhood alone with hundreds of people buried in the mud.

“We’re Muslim. We need a proper burial, in the Islamic way,” said Ikaya. “We don’t want this.”

Disaster agency spokesman Sutopo Purwo Nugroho told a briefing in Jakarta some limited searching might continue but large-scale searches with many personnel and heavy equipment would cease on Oct. 11.

Debris would be cleared and areas hit by liquefaction would be turned into parks and sports venues. Surveys would be carried out and people living in vulnerable places would be moved.

“We don’t want the community to be relocated to such dangerous places,” Nugroho said.

Most of the dead from the quake and tsunami were in Palu, the region’s main urban centre. Figures for more remote areas are trickling in but they seem to have suffered fewer deaths than the city.

Dede Diman, 25, a resident of Petobo, another neighborhood in Palu that was laid waste by liquefaction, said rescuers hadn’t even started searching where his sister was lost.

“We’re already angry,” said Diman, who is living in a shelter with his brother and another sister. Their mother was killed and her body found.

“We don’t agree with giving up. Even if they give up, we won’t. We want to find our sister.”

Mohammad Irfan, 25, got home to Palu on Sunday, as air services picked up, from his job on Bali island, to help search for his missing grandfather.

“I’d feel very sad if the search mission ends because there are so many still missing and buried,” he said.

A grieving father was resigned to the search ending without his two-year-old daughter being found.

“What’s the point anyway? At this stage, they’re not even recognizable,” said Ondre, 38, who makes toys for a living.

His wife and two daughters were swept away in the tsunami that hit Palu’s seafront after the earthquake. He found the bodies of his wife and older daughter but is still looking for his younger daughter.

“I don’t want her to feel like her father never tried to find her. My soul wouldn’t rest,” he said by a mass grave atop a hill overlooking Palu’s bay as the sun set, where he had come to offer prayers.

Sulawesi is one of Indonesia’s five main islands. The archipelago sees frequent earthquakes and occasional tsunami.

Earlier on Sunday, dozens of Christians gathered outside ruined churches for services to give thanks for their survival and to mourn members of their congregation killed in the disaster.

Indonesia has the world’s biggest Muslim population but there are Christian communities throughout the archipelago, including in Palu.

“We are so relieved to be alive but sad because so many of our congregation died,” said Dewi Febriani, 26, after a service in a tent outside a church in Jono Oge village, south of Palu.

Jono Oge was hit hard by liquefaction with dozens of teenagers at a nearby church and camp killed. Many of them lie buried in the mud.