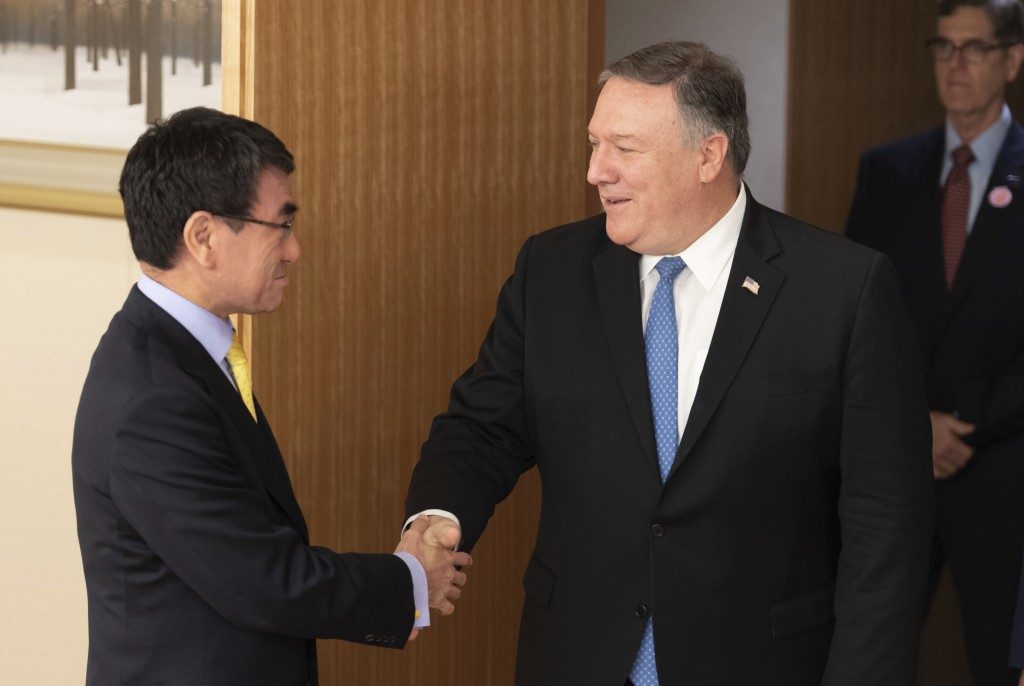 America’s top diplomat left Tokyo for Pyongyang on Sunday (local time) after pledging that the U.S. will coordinate with allies Japan and South Korea on efforts to persuade North Korea to give up its nuclear weapons.

On the eve of his fourth visit to North Korea, U.S. Secretary of State Mike Pompeo met Saturday with Japanese Prime Minister Shinzo Abe to try to unify the countries’ positions as he looks to arrange a second summit between President Donald Trump and North Korean leader Kim Jong Un and chart a path toward denuclearization.

Japan has been wary of Trump’s initiative, fearing it could affect its long-standing security relationship with the U.S.

Pompeo said it was important to hear from the Japanese leader “so we have a fully coordinated and unified view.” Pompeo also pledged that during his meeting with Kim on Sunday, he would raise the cases of Japanese citizens abducted by North Korea.

Pompeo later planned stops in South Korea and China to review the negotiations.

“It is important for us to hear from you as I travel to Pyongyang to make sure that we are fully in sync with respect to missile programs, [chemical and biological weapons] programs,” Pompeo told Abe. “We will bring up the issue of the abductees as well and then we will share with you how we hope to proceed when we are in Pyongyang tomorrow.”

Trump is pressing to meet with Kim for a second time after their June summit in Singapore produced a vague agreement on denuclearization with few, if any, specifics. Despite the historic meeting, the two sides are deadlocked over how to achieve that goal. Trump canceled Pompeo’s initial planned return to North Korea last month.

In contrast with South Korea, where President Moon Jae-in has been at the forefront of encouraging Trump’s rapprochement with the North, Japan has been decidedly cautious, insisting its interests and concerns be addressed.

Abe did not speak of differences but highlighted the importance of demonstrating to the world that the U.S.-Japan alliance is “more robust than ever” and stressing the importance of “thorough coordination” with Washington on all aspects of North Korea policy.

Pompeo has repeatedly refused to discuss details of negotiations, including a U.S. position on North Korea’s demand for a declared end to the Korean War and a proposal from Seoul for such a declaration to be accompanied by a shutdown of the North’s main known nuclear facility.

The U.S. and Japan have pushed for the North to compile and turn over a detailed list of its nuclear sites to be dismantled as a next step in the process; the North has rejected that.

Japan’s foreign minister, Taro Kano, said the accounting continues to be a priority for his country.

“Disclosing all nuclear inventories is the first step toward denuclearization,” he told reporters after Pompeo wrapped up his meeting in Tokyo.

Kano also said he and Pompeo didn’t go into details of a possible war-end declaration because it’s premature while there is virtually no progress in denuclearization. “We are not even talking about whether to do it or not,” he said. “It’s not an issue that we are even considering.”

Many believe such a declaration could reinforce North Korea’s demands for the U.S. to withdraw its forces from South Korea and Japan.

While traveling to Asia, Pompeo said his mission was to “make sure that we understand what each side is truly trying to achieve … and how we can deliver against the commitments that were made” in Singapore. He said they would develop options, if not finalize, the location and timing of a second Trump-Kim summit.

He has also distanced himself from an earlier stated goal of achieving North Korea’s nuclear weapons abandonment by the end of Trump’s term in January 2021.

Since the effort got underway with a secret visit to the North by then-CIA chief Pompeo in April, there has been only limited progress.

North Korea so far has suspended nuclear and missile tests, freed three American prisoners and dismantled parts of a missile engine facility and tunnel entrances at a nuclear test site. It has not taken any steps to halt nuclear weapons or missile development.

The North also has accused Washington of making “unilateral and gangster-like” demands on denuclearization and insisted that sanctions should be lifted before any progress in nuclear talks. U.S. officials have thus far said sanctions will remain in place until the North’s denuclearization is fully verified.