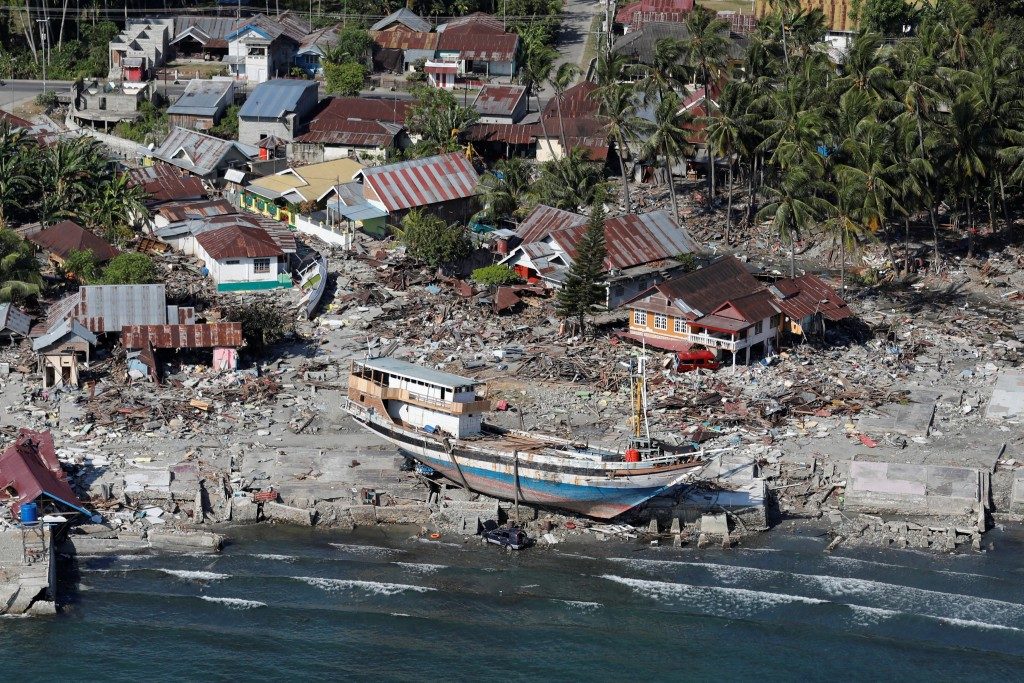 Electricity was restored and some shops reopened in Indonesia’s quake and tsunami-stricken city of Palu on Thursday, but the fate of many thousands of people in outlying districts was unknown nearly a week after the disaster struck.

The small city of 370,000 people has been the focus of the aid effort launched after last Friday’s 7.5 magnitude earthquake and tsunami on the west coast of Sulawesi island.

International help in searching for survivors has gathered pace, but communities in more remote areas have been cut off by broken roads, landslides and crippled communications, leaving people increasingly desperate for basic needs as aid has only just begun to trickle through.

By Thursday, the official death toll stood at 1,424, but it will almost certainly rise as bodies are still being recovered in Palu, where most of the dead have been counted. Figures for more remote areas were only trickling in, if at all.

“There are so many challenges with this disaster, it’s never been so bad,” said Frida Sinta, an aid volunteer trying to get basic food and other supplies out to fellow residents of Palu.

The city, 930 miles northeast of Indonesia’s capital, Jakarta, has teetered close to chaos this week, with outbreaks of looting, but a recovery was evident as some shops and banks reopened and a major mobile phone network was back up.

Orderly queues formed at petrol stations after the arrival of fuel shipments and late in the day, traffic lights and televisions flickered back to life as the power came back on.

The improvements are helping with the aid effort.

“We carry whatever we can by car or motorbike within the city wherever we can. But not yet to the most inaccessible places,” Sinta said.

Altogether, the badly affected areas in the disaster zone include some 1.4 million people.

Rescue workers are pushing into outlying districts, where residents say they have been scavenging for coconuts, bananas and cassava.

Villagers rushed a Red Cross helicopter that landed near the town of Donggala, northwest of Palu, to distribute bread and other food, a Reuters photographer said.

National disaster-mitigation agency spokesman Sutopo Purwo Nugroho told a briefing the main roads to the south, west and east of Palu had been opened.

But there has been scant information about conditions on the road to the north, along the coast towards the epicenter of the quake, 78 km (50 miles) from Palu.

“There’s no data,” said Abdul Haris of the national search and rescue agency, when asked about the string of small settlements that line the road, which passes some sandy beaches that attract a trickle of tourists.

While the power is back in Palu, it will take much longer for people to pick up the pieces of their lives.

In Palu’s Balaroa district, badly hit by deadly soil liquefaction, Asril Abdul Hamid, 35, was poking through the wreckage of his home. He salvaged a few mementos including a family portrait.

“My immediate family is safe, thank G-d, but my cousin was killed,” he told Reuters.

Not far away, rescuers were using small flags to mark the location of bodies found in the debris.

“We discovered eight bodies with the rescue team but we haven’t been able to bring them out because we don’t have the right equipment,” said district police chief Andi Samsudin Effendy.

The body of a South Korean man, who had been in Palu for a sports event, was also found in the ruins of a hotel where dozens of people were killed.

Just to the east of Palu, the 500-tonne KM Sabuk Nusantara 39, lies, high and dry in a dock-side settlement, where the tsunami picked it up and dumped it. No one on board was hurt.

Engineer Charles Marlan, waiting with fellow crewmen on board the marooned ship for its owners to decide what to do, said he was thankful his ship had not killed anyone on land, as far as they knew.

“What is important is we are alive and for that we should be grateful,” he said.

Straddling the seismically active Pacific Ring of Fire, Indonesia has long been vulnerable to quakes and tsunamis.

In 2004, a quake off Sumatra island triggered a tsunami across the Indian Ocean that killed 226,000 people in 13 countries, including more than 120,000 in Indonesia.