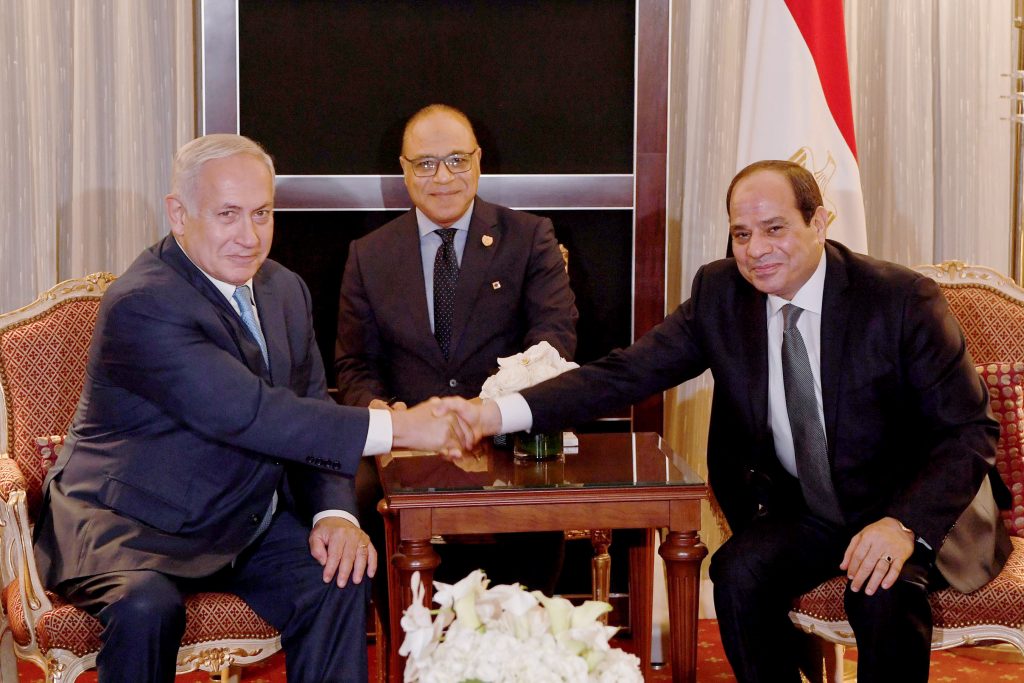 Egyptian President Abdel Fattah al-Sisi called for a resumption of Israel-Palestinian peace talks when he met Prime Minister Binyamin Netanyahu on the sidelines of the U.N. General Assembly in New York, Sisi’s office said on Thursday.

Netanyahu, writing on Twitter, said his talks with Sisi late on Wednesday focused on “regional developments.” He did not elaborate.

At the meeting at his hotel in New York, Sisi “stressed the importance of resuming the negotiations between the two sides, the Palestinians and the Israelis, to reach a just and a comprehensive solution based on a two-state solution and in accordance with the international treaties,” according to a presidential statement.

Egypt has also been working to broker a long-term ceasefire between Israel and the Gaza Strip’s dominant Hamas Islamist movement amid frequent violence along the Israel-Gaza border, where Palestinians have been holding weekly protests.

Israeli-Palestinian peace talks have been suspended since 2014 and efforts to revive them have not been successful.

Netanyahu and Sisi convened for their previously announced talks several hours after President Donald Trump said he wanted a two-state solution to resolve the Israeli-Palestinian conflict, in what had appeared to be the clearest expression yet of his administration’s support for such an outcome.

But later on Wednesday Trump told a news conference he would be open to a one-state solution if that was the preference of the parties themselves, a position he had previously stated.

Netanyahu said he was not taken by surprise by Trump’s initial remarks.

In a statement, Netanyahu said he was confident a promised U.S. peace plan would back Israel’s demand to maintain security control of the West Bank.

Netanyahu and Sisi met in public for the first time in 2017. Israeli media reports last month said they had held a secret summit in Egypt in May to discuss a truce in neighboring Gaza, which is under tight Israeli and Egyptian border restrictions.

Egypt was the first of a handful of Arab countries to recognize Israel under a 1979 peace treaty and the two countries maintain close co-ordination on security as well as energy ties.

On Thursday Israeli and Egyptian companies announced that they would buy into a pipeline that would enable a landmark $15 billion natural gas export deal to begin next year.