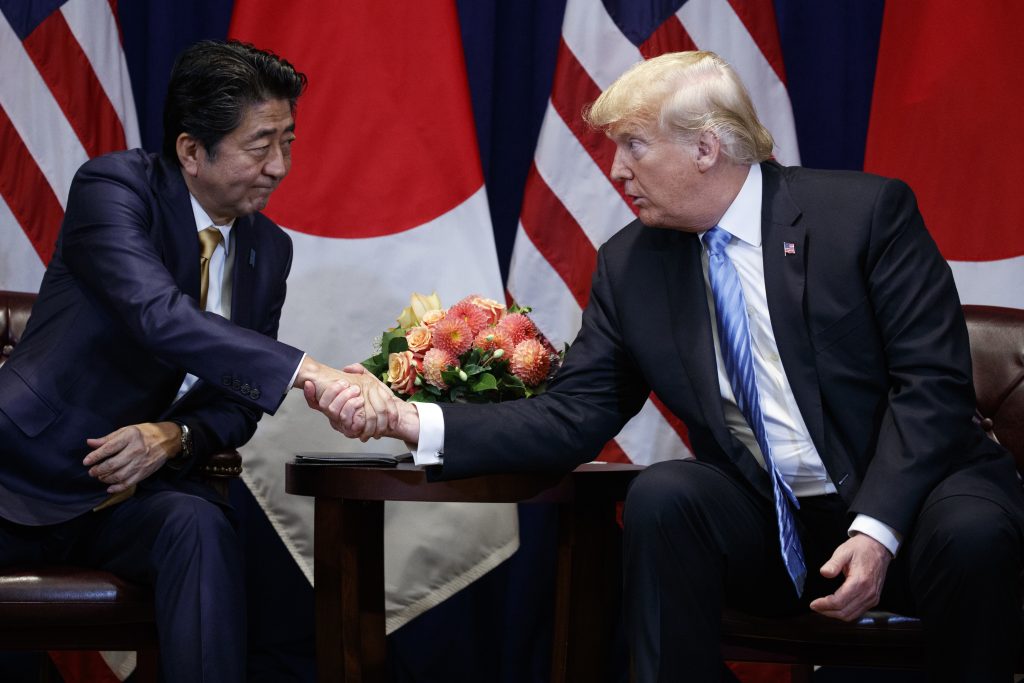 The United States and Japan announced Wednesday they will open negotiations on a bilateral trade agreement between the world’s first- and third-largest economies.

It’s a significant shift by Tokyo, which has been a strong advocate of a multi-nation trans-Pacific trade pact that President Donald Trump withdrew from soon after taking office.

Trump made the announcement after meeting with Japanese Prime Minister Shinzo Abe in New York on the sidelines of the U.N. General Assembly.

He said that Japan had been unwilling in the past to enter into such talks, but now is and such a deal “will be something very exciting.”

Abe has cultivated close ties with Trump since after his 2016 election, but trade relations have been difficult, since the Republican president withdrew from the 12-nation Trans-Pacific Partnership, or TPP, that had been negotiated by the Obama administration and championed by Abe despite considerable domestic political opposition in Japan.

The Trump administration, pushing to narrow the U.S. trade imbalance with Japan, has since imposed steel and aluminum tariffs on its ally. The U.S. has also been threatening to impose higher tariffs on auto imports that would have escalated trade tensions significantly.

It was not immediately clear if Japan won relief, but a U.S.-Japan joint statement released by the White House said, “We will make efforts for the early solution of other tariff-related issues.”

“This was something that for various reasons over the years Japan was unwilling to do. And now they are willing to do. So we’re very happy about that. And I’m sure they will come to a satisfactory conclusion,” he said.

The joint statement issued said negotiations will begin after completion of necessary domestic procedures in each country.

Lighthizer told reporters that he would be talking to Congress on Thursday about seeking trade promotion authority for the president to negotiate the agreement.

The statement said the proposed agreement will cover goods, and other key areas including services, that can produce “early achievements.” The U.S. and Japan would then negotiate on other trade and investment items.

The TPP has proceeded without the U.S., and in his speech to the U.N. on Tuesday, Abe described himself as a “flag-bearer for free trade,” and said “there has been no greater joy for me” than when it was approved by Japan’s parliament. He also pointedly noted that Japanese investment supports 850,000 jobs in the U.S. and that 3.8 million Japanese cars are manufactured annually in the U.S., more than double the number it imports into the country.

At Wednesday’s meeting with Trump, Abe credited the U.S. president with a “major transformational change” in relations with North Korea after his June summit with Kim Jong Un. He also thanked Trump for congratulating him on his re-election last week as head of his ruling Liberal Democratic Party, clearing the way for up to three more years as Japan’s leader.

Trump and Abe also met privately over dinner Sunday at Trump Tower after the president arrived in New York.