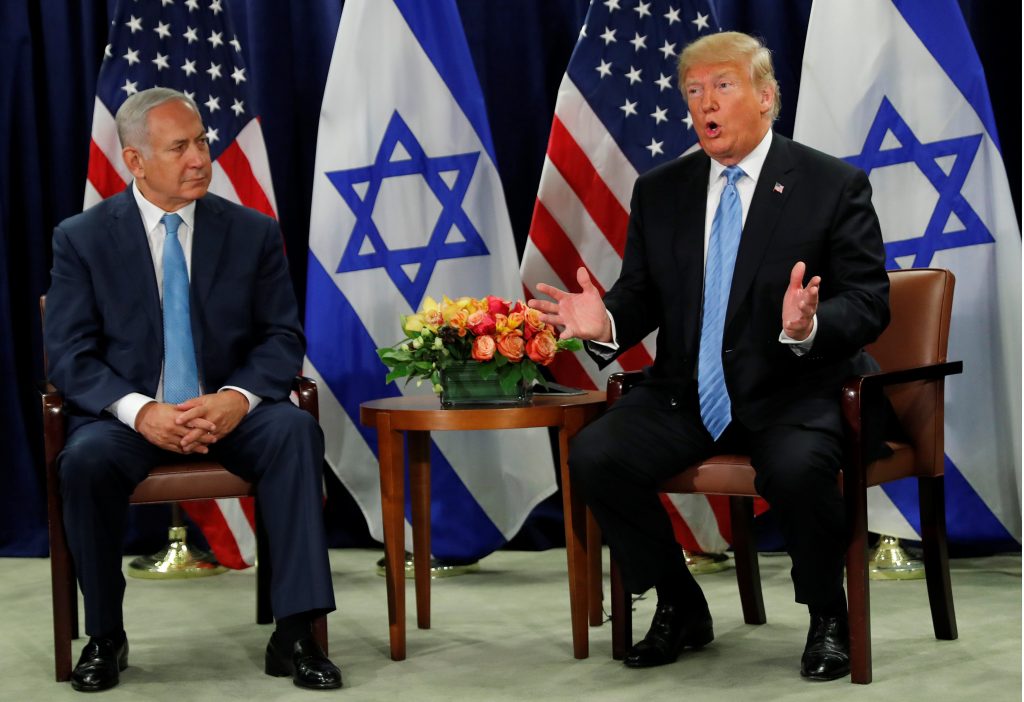 U.S. President Donald Trump said on Wednesday he wanted a two-state solution to resolve the Israeli-Palestinian conflict, the clearest expression yet of his administration’s support for such an outcome.

The Trump administration has in the past said it would support a two-state solution if both sides agreed to it.

Trump, in a meeting with Israeli Prime Minister Binyamin Netanyahu at the United Nations, also said he wanted to unveil a peace plan in the next two to three months.

“I like a two-state solution. That’s what I think works best … That’s my feeling,” said Trump, who is attending the annual U.N. gathering of world leaders.

Netanyahu has said that any future Palestinian state must be demilitarized and must recognize Israel as the state of the Jewish people – conditions that Palestinians say show he is not sincere about peacemaking.

The United States’ Arab allies are strong proponents of a two-state solution.

“I really believe something will happen. They say it’s the toughest of all deals,” Trump said. “It is a dream of mine to get that done prior to the end of my first term. I don’t want to do it in my second term. We’ll do other things in my second term.”

Netanyahu said after meeting Trump that he was “not surprised” at the U.S. president’s preference for a two-state solution for peace with the Palestinians, Israeli media reports said.

Yerushalayim is one of the major issues in the Israeli-Palestinian conflict. Both sides claim it as a capital. Trump’s moving the U.S. embassy there outraged the Palestinians, who have since boycotted Washington’s peace efforts, led by Trump’s son-in-law and adviser, Jared Kushner.

The Palestinians want to establish a state in Yehudah, Shomron, the Gaza Strip and eastern Yerushalayim.

Nabil Abu Rdainah, a spokesman for Palestinian Authority President Mahmoud Abbas, said, “The two-state solution means to us that we have a Palestinian state on the 1967 borders, with East Jerusalem as its capital. This is the only way to achieve peace.”

Rdainah said the Palestinians wanted to resolve all the core issues of the Israeli-Palestinian conflict – which include borders, settlements, refugees, security and the status of Jerusalem – “according to United Nations resolutions.”

Rdainah, speaking in Ramallah, refused to be drawn further, saying Abbas would make the Palestinian position clear in his speech to the General Assembly on Thursday.

Asked what Israel might have to give up in return for the embassy’s move to Yerushalayim, Trump replied: “I took probably the biggest chip off the table. And so obviously we have to make a fair deal, we have to do something. Deals have to be good for both parties … Israel got the first chip and it’s a big one.”