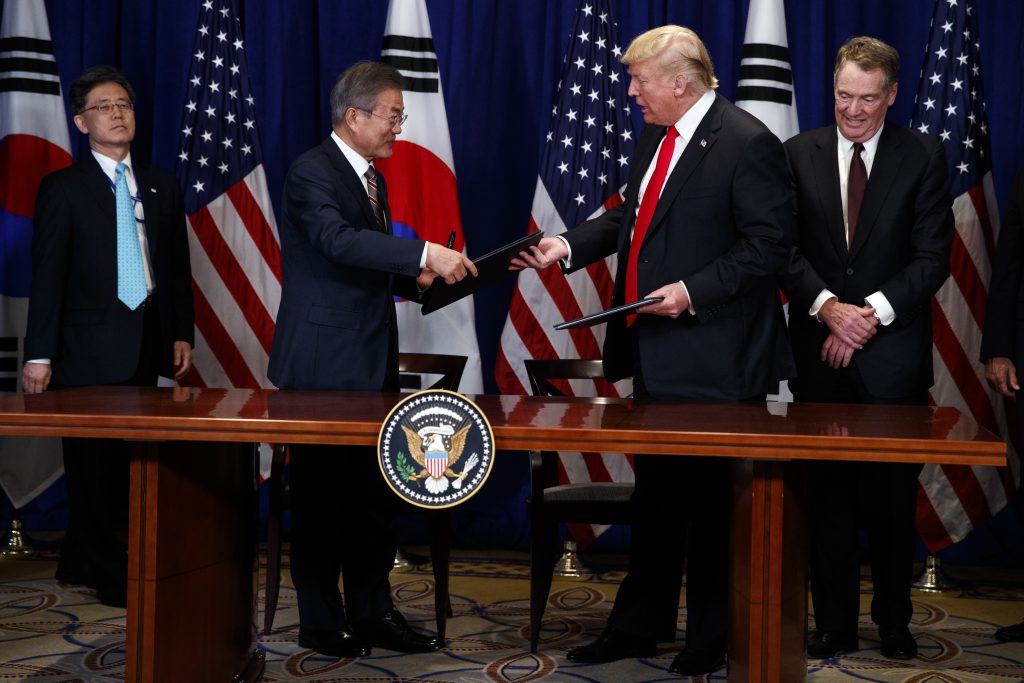 South Korean President Moon Jae-in pushed back Tuesday against widespread skepticism about the sincerity of Kim Jong Un’s vows to give up his nuclear bombs, saying that the current round of diplomacy with North Korea is “completely different” than the many failed deals that have frustrated past negotiators.

Moon, fresh off a dramatic summit in Pyongyang last week with Kim that saw more promises from the North Korean leader to dismantle his weapons programs, is at the U.N. General Assembly this week, meeting with President Donald Trump and other world leaders to explain and, to some extent, defend his efforts to bring peace to the famously hostile Korean Peninsula.

He told an audience at the Council on Foreign Relations think tank in New York that it was “only natural that we have plenty of suspicions regarding the true motivations” of Kim. It was, after all, only last year that a series of increasingly powerful North Korean weapons tests, including the nation’s sixth nuclear test explosion, and the tough reaction by Trump had many worrying about war. Some critics believe that tough sanctions and pressure, rather than engagement and concessions, stand a better chance of ridding the North of its nukes.

“It’s completely different this time around,” Moon said, speaking through an interpreter. What’s changed this time is that, unlike past efforts that collapsed when the countries tried to implement deals that had been made at the working level, this one has Trump and Kim making the decisions and then driving their lieutenants to follow through.

“This was a promise made in front of the whole world” by Trump and Kim, Moon said. “For this reason, I believe the promise will be kept.”

Moon says North Korea will eventually give up its nuclear weapons in return for security guarantees from the United States, which the North has always claimed is intent on destroying the ruling Kim family’s grip on power. Pyongyang also wants an end to what it calls U.S. hostility and normalized ties between Washington and Pyongyang.

Kim claims that since he has completed his nuclear arsenal, an assertion that analysts say is probably not yet true, he will now turn to boosting the conditions of his impoverished people. Skeptics say that North Korea wants to engage in long-running disarmament talks so it can offer up a series of small gestures in return for a stream of aid and concessions from outsiders.

Despite Moon’s assertion that a leader-driven process will make this round of diplomacy different from the past, there has been more deadlock than progress since a Singapore summit in June between Trump and Kim.

At the time, North Korea demanded that Washington agree to a declaration on the formal end of the Korean War, which was stopped in 1953 with a ceasefire, not a peace treaty, before it makes significant disarmament moves. These would include providing a list of the contents of its nuclear arsenal. The United States wants that list before it will sign off on the war declaration.

Trump and Kim have both said they want to meet again soon, and Moon has been pushing for such a meeting as a way to unstick the diplomacy. There will be high expectations if such a summit comes off.

Moon said he understands the doubt about Kim’s purported sincerity since the North Korean leader halted weapons tests in November and began reaching out to the South and Washington. For that reason he pushed to have large portions of the Pyongyang summit streamed live so that the world could see Kim and Moon together and “decide for themselves what kind of person Chairman Kim is.”

“The Chairman Kim I experienced … is young, but he is also candid,” Moon said, with “great aspirations to achieve economic development” and a willingness to abandon his nuclear programs to achieve that goal.