National Florence: An Unwelcome Visitor Who Refuses to Leave
National 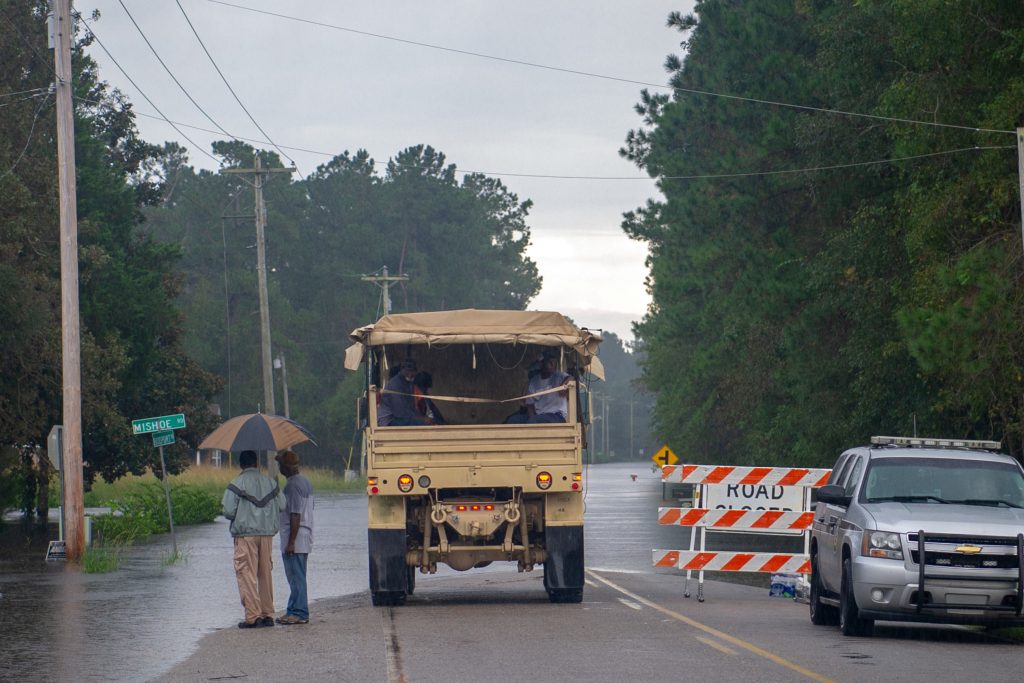 For many living near South Carolina’s coast, Florence is the visitor they never wanted who now refuses to leave.

Eleven days after the once-fierce hurricane arrived on the coast, and more than a week after it blew north and dissipated, rivers swollen by its relentless rains are still flooding homes and businesses in their paths as they make their way to the sea.

Some residents have no idea when they will return home. One of them is Vivian Chestnut, who evacuated her home in inundated Conway, South Carolina, six days ago.

The Waccamaw River, which flows through the city of 23,000, had already reached more than 21 feet — far surpassing the previous record high of 17.9 feet set by Hurricane Matthew two years ago — and it was still rising Tuesday afternoon.

The waterway was expected to crest on Wednesday, but not to drop below 18 feet or so until sometime next week. The river floods at 11 feet.

“You find yourself sitting around a lot and thinking, ‘What if,’ or, ‘I wonder what things are like right now,’ ” said Chestnut, who is staying with family in the area. “And wondering what you are going to find when you finally get back.”

It’s a scene repeating itself across eastern South Carolina, where rivers swollen from what one meteorologist calculated is the nation’s second-rainiest storm in 70 years slowly make their way down the state’s gentle sloping coastal plain.

If that weren’t bad enough, another weather system was forming off the coast in a hurricane season that still has two months to go. National Hurricane Center forecasters watching a low-pressure area about 260 miles south of Cape Hatteras, North Carolina, said it could become a tropical depression as it approaches the coast before moving quickly to the north.

While it will likely dump some additional rain on the Florence-battered city of Wilmington, it wasn’t expected to be significant enough to worsen the flooding.

“It shouldn’t put much of a dent in the rivers,” said Reid Hawkins, a National Weather Service meteorologist in Wilmington.

The storm was also having an enduring impact on the environment. A power outage at a wastewater station combined with heavy rain caused about 128,000 gallons of wastewater to spill into a river at Camp Lejeune in North Carolina, the U.S. Marine Corps reported Tuesday. But the military said the spill won’t threaten residential water supplies.

Officials at South Carolina’s state-owned utility were still warily monitoring two coal-ash ponds near Conway. Santee Cooper officials said floodwater from the Waccamaw River had already made it into one pond, but most of the ash had already been removed from it during an earlier cleanup project.

The river is likely to flood the second pond soon, but the utility promised that it has taken steps to lessen the environmental impact, such as installing silt fencing and a floating environmental containment boom.

Not far from the ash ponds, engineers are keeping an eye on U.S. Highway 501, the main link to Myrtle Beach. Water is now touching a temporary barrier of sand and plastic that has been erected to keep water off the bridge. Called the Lifeline, the temporary wall will remain effective if the water doesn’t rise more than an additional 5 feet from its current level, according to the state Department of Transportation.

A preliminary analysis of Hurricane Florence has determined that the slow-moving storm dumped more than 17.5 inches of water on a region stretching from Fayetteville, North Carolina, to Florence, South Carolina. Hurricane Harvey delivered 25.6 inches, said Ken Kunkel, a meteorologist at the National Oceanic Atmospheric Administration and North Carolina State University.

In North Carolina, where Florence’s floodwaters temporarily cut off the city of Wilmington and inundated several others, the rivers have stopped rising, but the recovery process is really just beginning. Gov. Roy Cooper has estimated billions of dollars in damages.

In rural Jones County, between Kinston and New Bern, two of the county’s six schools will have to be demolished after floodwaters left mold and mildew in their wake, School Superintendent Michael Bracy said.

Housing also promised to be scarce for flood victims. In rural areas where so many single-family and one-story structures were susceptible to flooding, even those that were untouched will not provide nearly as many options for evacuees as an urban area with multiple-story apartment buildings would, noted Red Cross Vice President of Operations and Logistics Brad Kieserman.

That will present a challenge for flood victims who initially fled to relatives’ homes but will likely need to find other shelter before their own homes are ready for their return.

“Staying with family is going to get a little old for everybody,” he said.