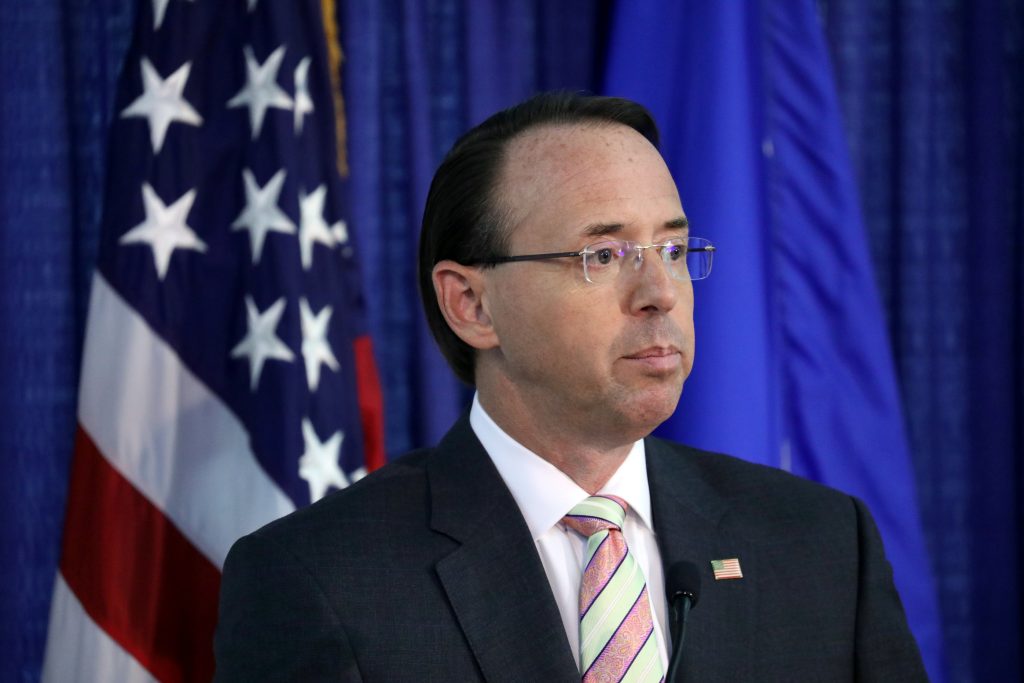 The fate of Deputy Attorney General Rod Rosenstein could turn on whether President Donald Trump believes the account of an ex-FBI official who, as Trump once asserted in a tweet, had “LIED! LIED! LIED!”

Rosenstein discussed secretly recording Trump, though one person who was present at the time said Rosenstein was just being sarcastic, and reportedly suggested removing the commander in chief from office. Rosenstein issued a swift denial to both claims.

The revelation that the second-ranking Justice Department official had even broached those ideas has created even more uncertainty for him at a time when Trump has railed against law enforcement leadership he has perceived as biased against him.

The president, at a Missouri rally Friday night, said there was a “lingering stench” at the Justice Department that “we’re going to get rid of.” He didn’t name names.

A key witness in the episode is Andrew McCabe, who was temporarily elevated to FBI director after Trump fired James Comey. McCabe documented conversations with senior officials, including Trump and Rosenstein, in memos that have been provided to special counsel Robert Mueller as part of the Trump-Russia investigation.

The discussion about possibly recording Trump occurred during a meeting with McCabe in May 2017 following Comey’s firing. Comey’s dismissal infuriated many rank-and-file agents, but the White House has said that decision was made on the Justice Department’s recommendation.

A memo from McCabe also describes Rosenstein as having discussed the potential removal of the president under the Constitution.

While Trump has publicly scorned Rosenstein, the president has been every bit as harsh toward McCabe, who was fired in March amid a watchdog investigation that concluded he repeatedly lied about his involvement in a news media disclosure.

Trump once called McCabe’s firing a “great day for democracy” and asserted without elaboration that McCabe knew all “about the lies and corruption going on at the highest levels of the FBI.” The inspector general’s findings have been referred to prosecutors for possible criminal charges.

Friday’s news reports raised the prospect that Trump could fire Rosenstein. Any dismissal could affect Mueller’s investigation into possible coordination between Russia and Trump’s presidential campaign. Rosenstein appointed Mueller and oversees his work.

Trump said at the Missouri rally that the Justice Department has some “great people” but also “some real bad ones.” He said the “bad ones” were gone, “but there’s a lingering stench and we’re going to get rid of that, too.” It was unclear to whom he was referring, and the White House did not respond to questions about Rosenstein’s remarks.

Rosenstein’s comments were first reported by The New York Times, which also said he raised the idea of using the 25th Amendment to remove Trump as unfit for office. Rosenstein denied it.

“I never pursued or authorized recording the President and any suggestion that I have ever advocated for the removal of the President is absolutely false,” he said in a statement.

The differing accounts of the conversation underscore the conflicts that roiled the FBI and Justice Department early in the Trump administration. Rosenstein, just weeks into his job, wrote a memo critical of Comey’s handling of the Hillary Clinton email server investigation that the White House used as justification for firing Comey.

Rosenstein distanced himself from the White House soon after Comey’s firing by saying his memo “was not a statement of reasons” for firing Comey. Comey, meanwhile, has criticized Rosenstein’s role in the firing but has said Rosenstein has acted honorably since then.

Comey and McCabe, once close associates at the FBI, have provided wildly divergent accounts about who knew what when regarding a 2016 Wall Street Journal story on an FBI investigation into the Clinton Foundation.

McCabe says he told Comey that he had authorized FBI officials to share information with a reporter in order to push back against a story McCabe felt was going to be unfair to the bureau and inaccurate. Comey has said McCabe did not acknowledge having done so and left the impression that he didn’t know who had shared the information with the journalist.

The inspector general’s office has accepted Comey’s account over McCabe’s in concluding that McCabe repeatedly lied to internal investigators under oath. McCabe denies that.

The Justice Department on Friday distributed a list of instances in which the inspector general said McCabe had made false statements in the past. The department also released an email from one attendee who said Rosenstein’s “statement was sarcastic and was never discussed with any intention of recording a conversation with the president.”

One of the people briefed on the conversation in question, who spoke on condition of anonymity because of the confidential nature of the interaction, said it occurred during a moment of frustration between McCabe and Rosenstein.

Rosenstein was rankled by the revelation that Comey had kept memos about his interactions with the president, and McCabe wanted a more aggressive approach toward the White House, the person said.

At that point, Rosenstein said to McCabe something to the effect of, “What do you want, you want me to wear a wire?” according to the person. Rosenstein was asked in the meeting if he was serious, and he said yes, but he did not mean for the wire comment to be taken seriously as a tactic to investigate Trump, the person said.

The person also said that a memo from McCabe describes Rosenstein as referencing the 25th Amendment to the Constitution, which says that a president can be declared “unable to discharge the powers and duties of his office” upon a majority vote of the vice president and the Cabinet.

The person said a different memo about that day from another FBI official, Lisa Page, does not include the 25th Amendment reference. But another person with knowledge of the interactions, who also insisted on anonymity to discuss private conversations, said there were multiple meetings that day and that Page’s notes are about a different meeting, which explains why her notes don’t line up with McCabe’s.

McCabe’s lawyer, Michael Bromwich, said in a statement that McCabe had drafted memos to “memorialize significant discussions he had with high level officials and preserved them so he would have an accurate, contemporaneous record of those discussions.” He did not address the content of the memos.