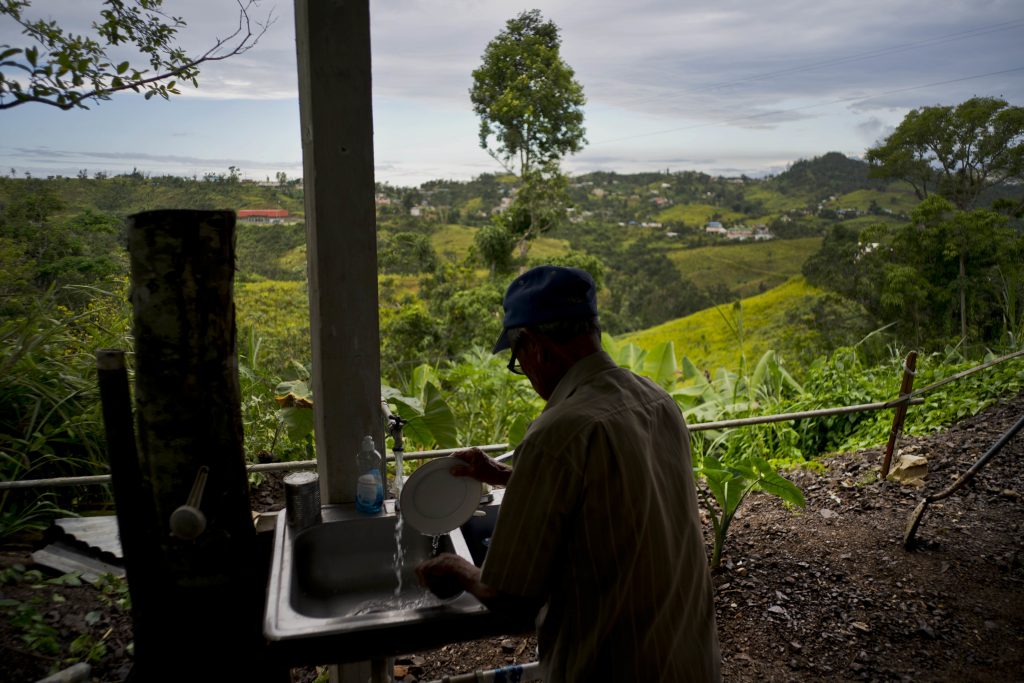 The uplifting strains of one of Puerto Rico’s most beloved songs filled the air at 6:15 a.m. on Thursday as a choir stood in the coastal town where Hurricane Maria made landfall at that moment exactly one year ago.

The serenade in Yabucoa, a fishing and farming town of 37,000 still struggling to recover from the Category 4 storm, was the first in a series of events to mark the anniversary of the devastating storm and remember the estimated 2,975 people who lost their lives in its aftermath. Protests were planned in San Juan and elsewhere, as well as a funeral procession. Tens of thousands remain without adequate shelter and reliable access to electrical power a year after the hurricane, which caused an estimated $100 billion in damage.

While the U.S. government has invested billions of dollars to help clean up and repair the U.S. territory, much work remains. Major power outages are still being reported, tens of thousands of insurance claims are still pending and nearly 60,000 homes still have temporary roofs unable to withstand a Category 1 hurricane.

“I think it’s inexplicable,” Kumi Naidoo, Amnesty International’s secretary general, told The Associated Press during a visit to the island Thursday. “There’s no justifiable reason I can see for this gross level of negligence.”

Government officials argue that many changes have been made to better prepare Puerto Rico for future storms, but they acknowledge that significant obstacles remain.

Jose Ortiz, director of Puerto Rico’s Electric Power Authority, told reporters that 20 percent of repairs made to the power grid need to be redone. He said crews didn’t have access to the best materials at the time or were forced to rely on temporary fixes, such as using trees as makeshift power polls after Maria destroyed up to 75 percent of transmission lines.

In addition, municipal officials have complained that reconstruction efforts are too slow. Ariel Soto, assistant to the mayor of the mountain town of Morovis, said that 220 families there remain without a proper roof.

“We’re still waiting for help,” he said. “This hit us hard.”

In the capital, San Juan, among those still living under a blue tarp during the peak of hurricane season was Sixta Gladys Pena, a 72-year-old community leader.

“You worry, because you think it’s going to fly off like it did before,” she said. “We’ve lost an entire year and nothing has been resolved. You feel powerless.”

Puerto Ricans also have become increasingly angry and frustrated as President Donald Trump recently touted what he said was a “fantastic” response to Hurricane Maria, calling it an “unsung success” as he denied the official death toll without presenting any evidence.

Nivia Rodriguez, a 60-year-old retiree whose uncle died a week after the storm, said she grew upset after watching videos of rescue crews in North Carolina when Hurricane Florence hit.

“They saved five dogs that were drowning,” she said, adding that she feels Puerto Rico didn’t get the same treatment. “That hits you.”

Like many, Rodriguez hoped that after Thursday, she would no longer be bombarded by photos and videos that make her feel like she’s reliving Hurricane Maria. “It’s too much,” she said.

But others felt that Maria’s tragic legacy still needs to be acknowledged for long after the anniversary has passed. Among them was a group of artists unveiling an exhibition called simply, “6:15 A.M.”

Artist Omar Banuchi, who organized the exhibit, said he was reluctant at first, in part because he didn’t know how to approach the subject. “It’s something that affected all of us and keeps affecting us,” he said.

He said the exhibition walks a fine line, with some paintings showing beautiful landscapes alongside trailers set up by Puerto Rico’s forensics institute as part of the effort to try to identify the bodies of those who perished in the storm. There also will be live music that will incorporate sounds of the hurricane hitting the island.

“The point is for people to have a good time,” Banuchi said. “But there will be certain uncomfortable moments. … Maria is still a difficult topic.”