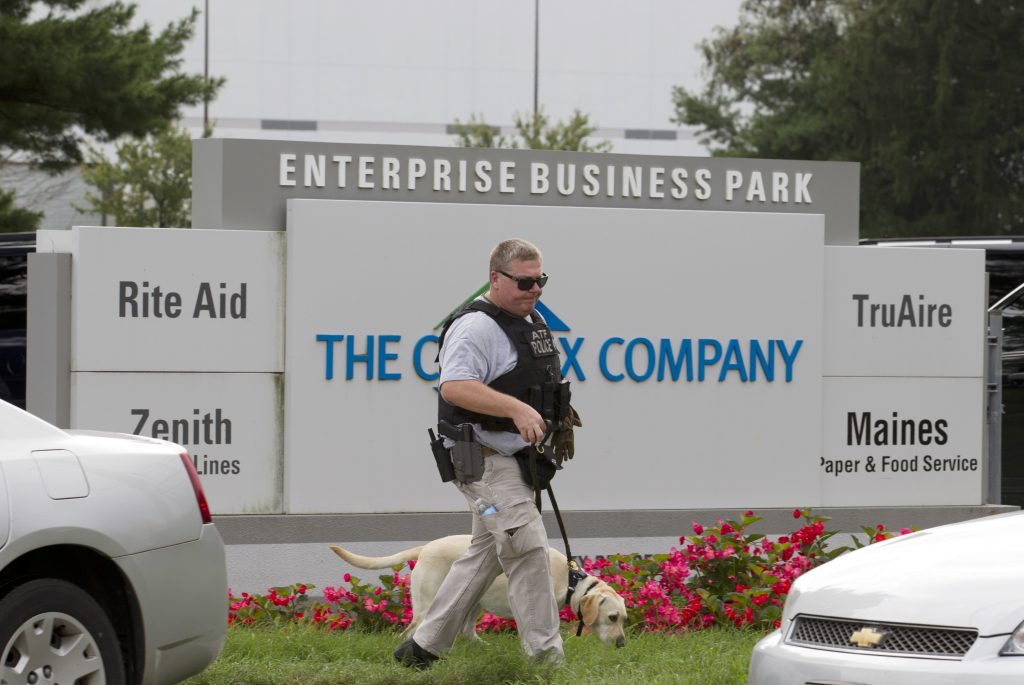 An employee at a Rite Aid warehouse opened fire at work Thursday, killing three people before taking her own life, authorities said. Several other people were wounded.

The suspect was a 26-year-old temporary employee at the Rite Aid distribution center in northeastern Maryland, Harford County Sheriff Jeffrey Gahler told a news conference. She had been taken into custody in critical condition that morning. Her name was not immediately released.

It appears only one weapon, a handgun, was used and no shots were fired by responding law-enforcement officers, Gahler said.

Krystal Watson, 33, said her husband, Eric, works at the facility and told her told her that the suspect had been arguing with somebody else near a time clock after a “Town Hall meeting.”

Watson said her husband told her the shooting started in a break room.

“She didn’t have a particular target. She was just shooting,” Watson said as she drove away from a fire station where relatives tried to reunite with loved ones.

Johns Hopkins Bayview Medical Center in Baltimore said it was treating four patients with gunshot wounds. Two were in stable condition and two were seriously injured.

A spokesman for a health system that includes Christiana Hospital in Newark, Delaware, said one patient was being treated there. Christiana Care Health System spokesman Hiran Ratnayake said the person was in serious condition.

Gahler said the call about shots fired came in at about 9:06 a.m. and deputies and other officers were on the scene in just over five minutes.

Mike Carre, an employee of a furniture-logistics operation next to the distribution center, said he helped tend to a wounded man.

Carre locked the doors of his workplace after the injured man came hobbling in, bleeding from his leg. He called 911 from a bathroom before helping colleagues wrap the man’s blood-soaked jeans above his injury to cut off blood flow.

Carre said the man told him the shooter “just came in in a bad mood this morning. He said she’s usually nice. But today, I guess it wasn’t her day. She just came in to pick a fight with someone.”

“She pulled out a gun and she just started shooting at her co-workers.”

At a nearby fire station, family members were waiting to be reunited with loved ones. Police blocked off the road outside but were waving in cars driven by people who said they were there to meet up with people who were at the distribution center.

Reggie Rodgriguez’s mother works at the distribution center. His wife had tried calling her numerous times but got no answer.

“I was calling her all morning. It went to voicemail because they keep their phones in lockers,” said Kelly Rodriguez, 40.

When they finally reached his mother Thursday afternoon, Reggie Rodriguez said, “That’s all I wanted to do: Hear her voice.” His mother was uninjured. He said she sounded relieved that the crisis was over.

A law-enforcement official said authorities were working their way through the distribution center to clear the facility.

“At this time, we are confident that the suspect acted alone … We do not believe there is any further threat to the community now, but we still have to completely clear that building.”