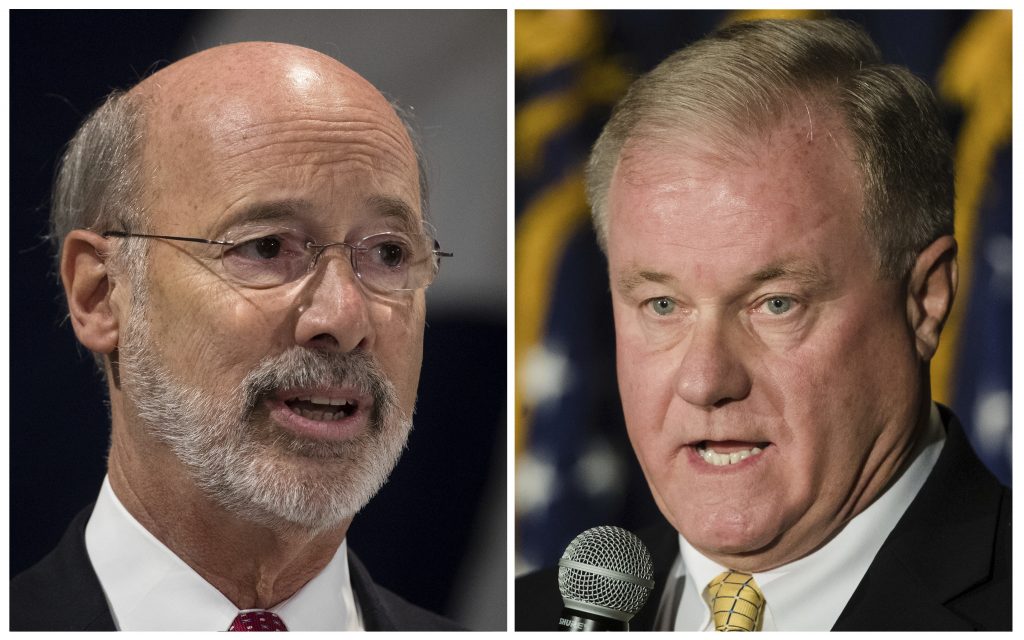 The candidate had just chided the media minutes earlier for not being tougher on his opponent when the moderator asked him what might be his least favorite campaign question: Why won’t you release your tax returns?

It wasn’t a scene from the 2016 presidential race. Rather, it was from this year’s campaign for governor in Pennsylvania, where the Republican challenger who has made millions from his trash-hauling business has refused to release his tax returns.

“How much I make or don’t make is nobody’s business, frankly,” the candidate, Scott Wagner, responded during a question-and-answer forum.

The incumbent, Democratic Gov. Tom Wolf, released his tax return in what he said was a nod to transparency. The discrepancy between the two candidates and the ongoing dispute highlights a fact that was overlooked in the controversy over then-candidate Donald Trump’s refusal to release his returns during the 2016 presidential race: The nation’s other executive branch leaders — state governors — also are not required to release their tax returns and often don’t.

It’s an issue that is playing out this year in several hotly contested races, including in Illinois, Iowa and New Mexico, to name a few.

With races for governor on the November general election ballot in 36 states this year, candidates in fewer than half of those states have released part or all of a tax return, according to a review by Associated Press statehouse reporters.

Only one state, Vermont, has a law that says candidates for governor and other statewide offices must release at least part of their tax returns. It’s in use for the first time this year after being passed in 2017, but there are no penalties for ignoring it — as did one candidate who appeared on the state’s primary ballot in August.

Somewhat ironically, lawmakers in more than two dozen states introduced legislation last year that would have required presidential candidates to release their tax returns as a condition of getting on the ballot. None of those became law, in part because of constitutional concerns, and two were vetoed.

Even without a requirement, it has become customary in some states for the candidates for governor to release their tax returns, or at least partial returns, as it has been in U.S. presidential contests. President Trump’s refusal to release his broke four decades of precedent and has led to questions about his wealth, debts and, amid the ongoing investigation into Russian election interference, whether he has Russian financial ties.

Democrats say Pearce’s tax returns could provide more information about his 2003 sale of an oilfield services company and show whether he has any conflicts of interest in a state that depends on the oil and natural gas industry to support about one-third of its annual state budget.

Democrats and their allies have attacked him on social media for refusing to release his returns and tied that criticism to President Trump: “What is Pearce hiding?” reads one labor union’s Twitter post.

Transparency advocates worry that Trump’s election victory will embolden other candidates for top office to keep their tax returns private.

It has emerged in some races as a campaign issue.

In Illinois, where candidates traditionally release a return, Democrat J.B. Pritzker, a billionaire, did not release a full tax return. That inspired a rival in the primary to compare him to Trump. After surviving that campaign, Pritzker is facing off in the general election against a candidate with almost as much money — the incumbent governor, Republican Bruce Rauner — who also has not released a full tax return.

Iowa Gov. Kim Reynolds, a Republican, released 10 years of tax returns and challenged Democratic nominee Fred Hubbell to do the same. Hubbell released only portions of his returns, prompting Reynolds to question what Hubbell had to hide.

Hubbell’s campaign shot back that Reynolds is being hypocritical, after having never questioned Trump’s failure to release his. Reynolds’ campaign responded that she believes Trump, too, should release his returns.

A tax return will show specific amounts of income, the sources of that income, taxes paid and strategies used to limit or avoid tax liability, what they deduct and how much they give to charity.

All those details can be fodder for campaign attack ads, explaining why many candidates are reluctant to release it.

Cox — who released his two-page 1040 forms, but none of the attachments or schedules released by Newsom — suggested the Democrat is taking advantage of lower income taxes in Nevada and getting rich from an “intricate web of Getty-funded properties and businesses.”

A spokesman, Nathan Click, said Newsom had no regrets about releasing his tax returns, and remained “proud to have set the bar of transparency in this race.”

The release-or-not-to-release calculation has been on full display in Wagner’s uphill bid to unseat Wolf in Pennsylvania.

Wagner has said he will not divest his ownership of the $75 million waste hauling business should he win. That has raised alarms with transparency advocates about the potential for conflict because state government heavily regulates municipal waste.

He has given varied reasons for his refusal to open his tax returns for review — saying at one point it was because they were “very complicated.” At another, he said unions would use them to promote his wealth in an attempt to organize his company’s workers.

Wagner maintains that he has complied with state requirements to disclose sources of income, that he owes no back taxes and provides charitable contributions through his company. Democrats say his word is not enough.

In a statement, the state Democratic Party said Wagner’s “refusal to release his tax returns raises questions about what he could be hiding.”