National Worst Flooding Yet to Come for Waterlogged Carolinas
National 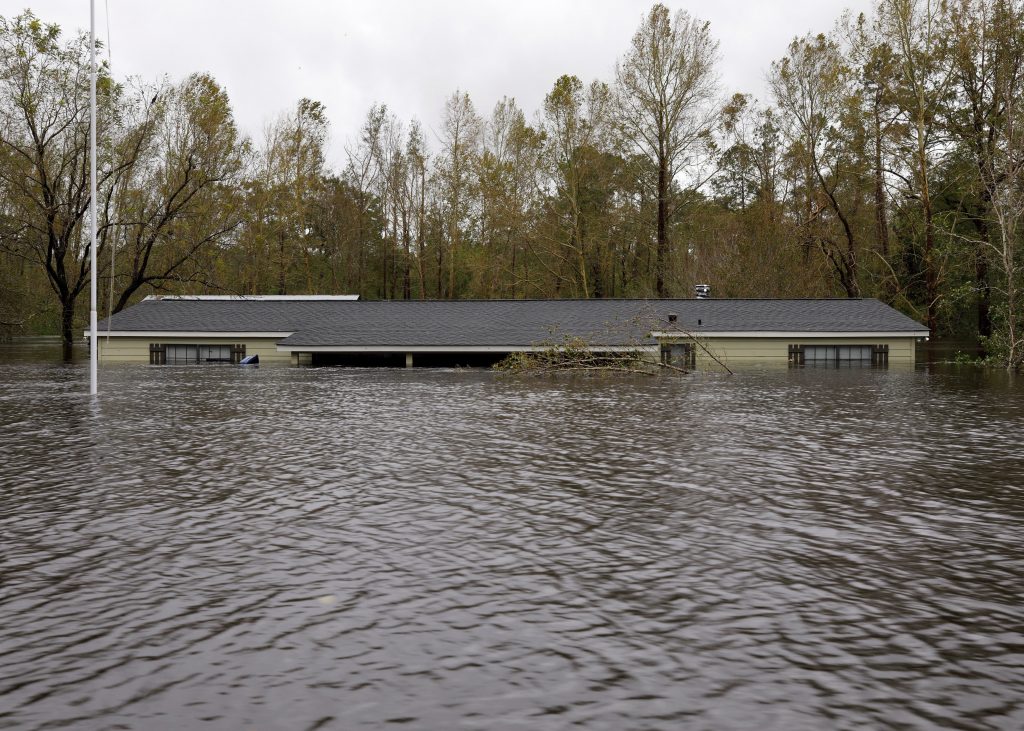 Deadly storm Florence moved across western North Carolina early on Monday and continued to dump rain that has nowhere to go except to swell rivers, flood highways and homes, and threaten more lives as it heads towards Virginia and New England.

For the water-logged Carolinas, “the worst is yet to come” as river levels rise to historic levels, said Zach Taylor, a meteorologist with the U.S. National Weather Service.

“The soil is soaked and can’t absorb any more rain, so that water has to go somewhere, unfortunately,” he said. “Those rivers are going to start to crest later today and Tuesday and maybe longer.”

Flash floods, landslide warnings and “prolonged significant river flooding” throughout the region will continue for the next few days, the National Weather Service (NWS) said.

The coastal city of Wilmington remained cut off by high flood waters early on Monday, tens of thousands of homes were damaged and at least 17 deaths were reported in North and South Carolina.

Florence, a one-time hurricane that weakened to a tropical depression by Sunday, is expected to decline in force again on Monday before reintensifying on Tuesday and Wednesday, the U.S. National Hurricane Center said.

It has dumped up to 40 inches (101.6 cm) of rain on North Carolina since Thursday and continued to produce heavy rain over much of North Carolina and eastern South Carolina, the NWS said.

An additional 2 to 5 inches of rain is expected with isolated areas of 8 inches (20 cm) possible through Tuesday in the Carolinas and Virginia.

“The storm has never been more dangerous than it is right now,” North Carolina Governor Roy Cooper told a news conference.

More than 900 people were rescued from rising floodwaters and 15,000 remained in shelters in the state, Cooper said.

Many rescues took place on swift boats in Wilmington, a coastal city of about 117,000 people on a peninsula between the Cape Fear River and the Atlantic Ocean.

“There are no roads … that are leading into Wilmington that are passable because of the flooding that is taking place now inland,” Saffo said.

Officials urged people who had been evacuated to stay away.

“Our roads are flooded, there is no access into Wilmington,” New Hanover County Commission Chairman Woody White told a news conference. “We want you home, but you can’t come yet.”

In Leland, a low-lying city north of Wilmington, homes and businesses were engulfed by water that rose up to 10 feet over Highway 17 in what local people called unprecedented flooding.

The sheriff’s department and volunteers rescued stranded residents by boat, extracting families, infants, the elderly and pets. Gas stations were abandoned and fallen trees made many roads impassable.

More than 641,000 homes and businesses were without electricity in North and South Carolina and surrounding states, down from a peak of nearly 1 million.

Florence set a state record for rain from a hurricane, surpassing the previous high of 24 inches from Hurricane Floyd which killed 56 people in 1999, said Bryce Link, a meteorologist with private forecasting service DTN Marine Weather.

South Carolina’s governor urged anyone in a flood-prone area to evacuate.

“Those rivers in North Carolina that have received heavy rainfall are coming our way,” Governor Henry McMaster told a news conference. “They have not even begun [to crest]. But they will. And the question is how high will the water be, and we do not know.”

By 5 a.m. on Monday, Florence’s winds had dropped to about 30 miles per hour (40 kph), the NWS said, with weakening forecast over the next 24 hours before intensifying again as an extra-tropical low-pressure center.

The center of the storm was about 125 miles west southwest of Roanoke, Virginia and moving northeast at 13 mph, the weather service said.