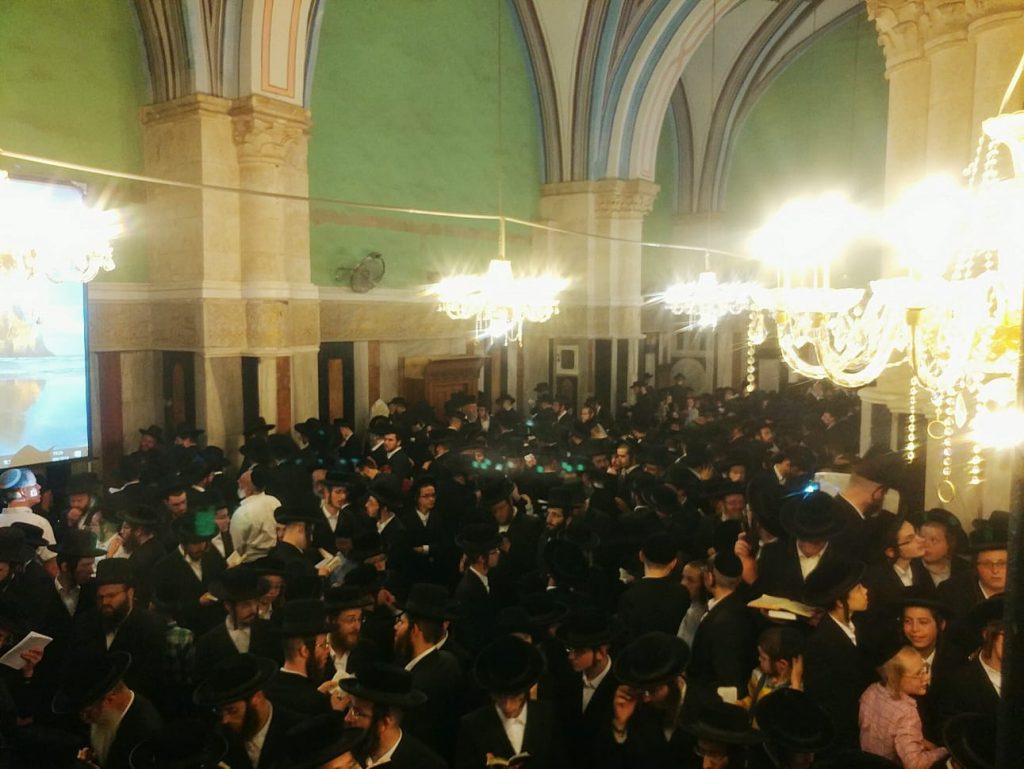 As Yom Kippur inexorably comes closer, the mekomos hakedoshim throughout Israel are experiencing large numbers of visitors who come late at night to say Selichos and early in the morning to daven netz.

Overnight Sunday, some 15,000 people davened in Me’aras Hamachpelah, as the entire site was open to Jews only. Among those at the site Sunday night was the Stolin-Karlin Rebbe, shlita, along with 3,000 of his Chassidim.

Even more are expected for the last Selichos Monday night, and again the entire site, including Ulam Yitzchak, will be open to Jews only. For the first time, thousands are also expected on Yom Kippur, as several organizations have set up tents and rest areas – as well as meals before and after the fast – as they seek to attract Jews to the site for the holy day. There were no security incidents reported.

Meanwhile some 1,500 people came to daven at Kever Yosef Sunday night. There were no security incidents reported. Monday marks 18 years since Israel abandoned security responsibility for the site, essentially handing it over to the Palestinian Authority after the murder of Rabbi Hillel Lieberman, Hy”d,  and subsequent major rioting that nearly destroyed the site. MK Miki Zohar said that just like Yosef during the period when he was a servant in Egypt, “we are not in control of this site. We need to change this quickly. We cannot compromise on basic issues, on our people’s history, including this tziyun.”

Arabs have vandalized and set fire to Kever Yosef numerous times since the signing of the Oslo Accords, most notably in 2000, 2003, 2008, and 2014. Between 2003 and 2009, the site remained desolate, until Israel and the PA reached an accord on refurbishing the site in 2010. Currently, Jews are allowed to visit Kever Yosef total of 15 times a year – usually on Erev Rosh Chodesh or during holidays – to daven.

Meanwhile, tens of thousands have been coming to the Kosel nightly since Rosh Hashanah – and the apex of the pre-Yom Kippur period at the holy site is set for Monday night, when some 100,000 people are expected to flood the Kosel plaza for the final midnight Selichos, traditionally led by Israel’s Chief Rabbis.

Thousands of police will be deployed throughout Yerushalayim, with forces on extra alert over Yom Kippur and the coming Sukkos holiday, especially in the wake of the murder of Ari Fuld, Hy”d.

Security forces will be checking all visitors to the Old City area, to ensure that security incidents are kept to a minimum. On Sunday night, two Jews who were walking to the Kosel accidentally roamed into the Muslim quarter and were attacked by Arabs, Channel 20 report. The two required hospital care for their injuries, the report said.