Israel Gov’t: Give Food to the Needy, But Make It Healthy
Israel 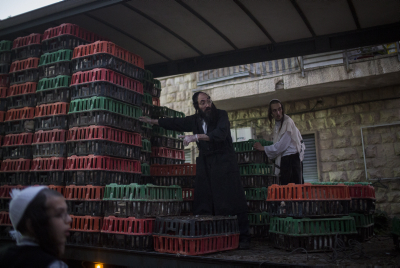 Donating food to those in need is a wonderful mitzvah, but it could be an even better one if the food that was donated was healthier, the National Insurance Institute (NII) said, based on a study of the nutritional condition of families that subsist on large amounts of donated food.

In general, these families have a high level of chronic diseases largely attributable to poor diet, and providing them with more fruits and vegetables, as opposed to the packaged products they usually get that are high in cheap carbohydrates and sugar, would help the situation immensely, the NII said.

The NII’s contention is based on a study of families enrolled in a state program that provides regular food packages to families in need. The program operates in 24 towns and cities in Israel, and includes 4,000 families. However, the NII pointed out that the products in the food packages were similar to those distributed by many chessed groups, who reach many more families.

Most of the families earn very little – some less than NIS 1,100 a month – and all are classified as financially and nutritionally insecure. Many of the donated food products have very poor nutritional profiles, and “are not sufficient to make the families nutritionally secure,” the NII said, adding that “when donating food to families in need, it is important to remember that we want to keep them healthy, not encourage their diseases. Donated food should be healthy, not overly processed or high in sugar.”