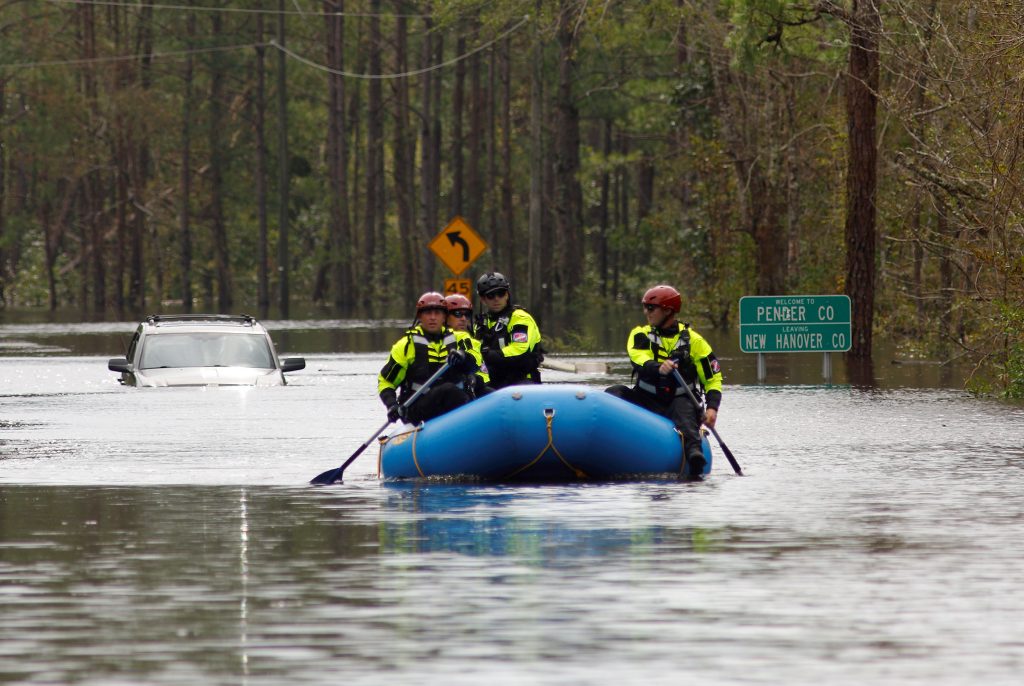 Emergency workers delivered truckloads of food and water to Wilmington, a city of 120,000 people mostly cut off from the rest of North Carolina by Florence’s still-rising floodwaters, as rescuers elsewhere used helicopters and boats to pull inland residents from homes swamped by swollen rivers.

The deadly storm was still dumping rain and had top winds around 30 mph early Monday, but forecasters said it was expected to gradually pick up forward speed and complete a big turn toward the Northeast, which also is in for a drenching of as much as 6 inches of rain.

Flooding worries were increasing in West Virginia and Virginia, where roads were closed and power outages were on the rise. About 500,000 homes and businesses were in the dark.

In some places, the rain stopped after Florence moved on, and the sun peeked through, but North Carolina Gov. Roy Cooper urged residents who were evacuated from the hardest-hit areas to stay away because of closed roads and flooding.

“There’s too much going on,” he said at a news conference.

The death toll climbed by two, to 19, as authorities found the body of a 1-year-old boy and an 88-year-old man died after his car was swept away.

The nation’s top emergency official said other states were in the path this week.

“Not only are you going to see more impact across North Carolina … but we’re also anticipating you are about to see a lot of damage going through West Virginia, all the way up to Ohio as the system exits out,” Brock Long of the Federal Emergency Management Agency said Sunday on Fox News.

Florence was still massive, despite being downgraded to a tropical depression from a once-fearsome Category 4 hurricane. Radar showed parts of the sprawling storm over six states, with North and South Carolina in the bull’s-eye.

North Carolina emergency response officials tweeted that 23 truckloads of military meals and bottled water were delivered overnight to Wilmington, the state’s eighth-largest city, which had been cut off from the rest of the state as all roads in and out of the city had been inundated by floodwaters.

One route into the city was reopened by midday Monday, officials said, but it wasn’t clear which road was open and whether it available to the general public.

Signs on a flooded highway leading out of town said “ROAD CLOSED,” and many streets that weren’t flooded were blocked by fallen timber. The smell of cracked pine trees wafted through hard-hit neighborhoods.

Residents there waited for hours outside stores and restaurants for water and other necessities. Police guarded the door of one store, and only 10 people were allowed inside at a time.

Desperate for gas to run a generator at home, Nick Monroe waited in a half-mile-long line at a Speedway station even though the pumps were wrapped in plastic. His power went on Thursday before Florence hit the coast, but he couldn’t recall exactly when.

“It’s all kind of a blur,” said Monroe, the sky overhead sunny and bright after the rain finally stopped.

County commission chairman Woody White said officials were planning for food and water to be flown into the coastal city, located on a peninsula with the rising Cape Fear River to the west and more water to the east.

To the north in Pollocksville, Coast Guard members used a basket suspended from a helicopter to rescue a man from the roof of a flooded home.

About 70 miles away from the coast, residents near the Lumber River stepped from their homes directly into boats floating in their front yards; river forecasts showed the scene could be repeated in towns as far as 250 miles inland as waters rise for days.

In Anson County, east of Charlotte, a train derailed on Sunday evening, but it wasn’t clear whether it was storm-related or if anyone was injured. Several cars of a CSX train left the tracks, WBTV reported.

The derailment led to at least one road closure. Officials have reported flooding caused by Tropical Storm Florence in Union County, located between Charlotte and Anson County.

Florence was still massive, despite being downgraded to a tropical depression from a once-fearsome Category 4 hurricane. Radar showed parts of the sprawling storm over six states, with North and South Carolina in the bull’s-eye.

In North Carolina, fears of what could be the worst flooding in the state’s history led officials to order tens of thousands to evacuate, though it wasn’t clear how many had fled or even could.

The storm’s death toll climbed to 18 as authorities found the body of a 1-year-old boy who was swept away by floodwaters in North Carolina after his mother drove into floodwaters and lost her grip on him while trying to get back to dry land.

The problem was water, and lots of it, in Wilmington.

Julie Lamb, with her 15-month-old twins, stepped off a Coast Guard boat after being rescued from her parents’ house in Lumberton, where the yard was submerged and water was still rising. Another boat was going back to get her husband, 4-year-old daughter and their pug dog.

“We decided to stay with mom and dad here. During Matthew, the water never reached their house,” she said. “But the water keeps coming up in their yard.”

Some stream gauges used to monitor river levels failed when they became submerged, but others showed water levels rising steadily, with forecasts calling for rivers to crest at or near record levels. The Defense Department said about 13,500 military personnel were assigned to help relief efforts.

The rain was unrelenting in Cheraw, a town of about 6,000 people in northeastern South Carolina. Streets were flooded and Police Chief Keith Thomas warned people not to drive, but the local food and gas store had customers.

“As you can tell, they’re not listening to me,” he said.