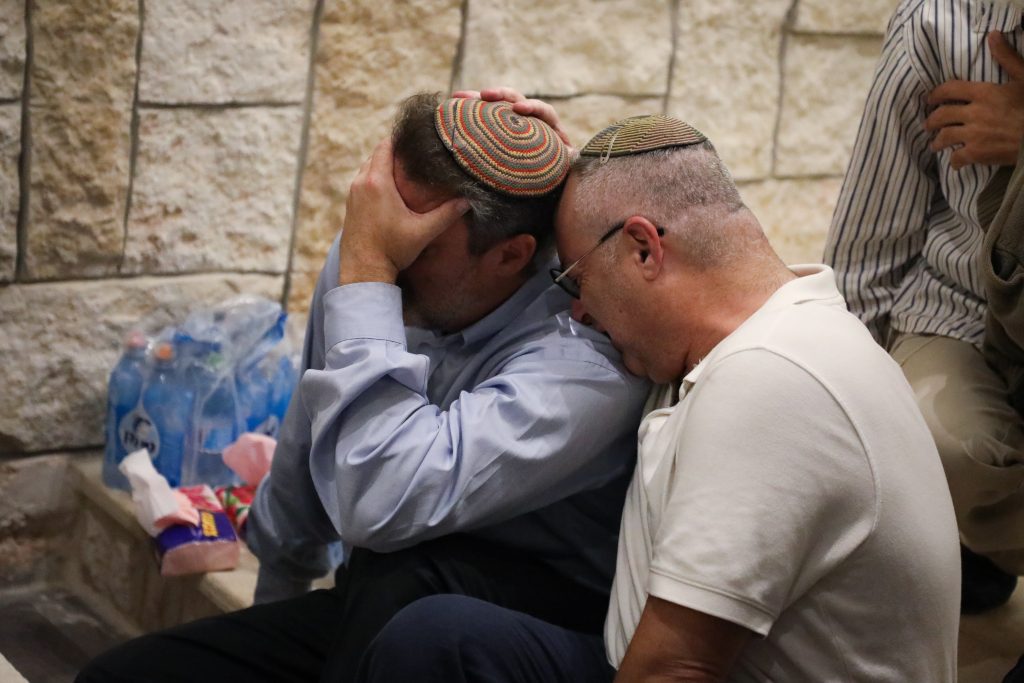 On Sunday night, thousands attended the levayah for Ari Fuld H”yd. The levayah was held at the regional cemetery in Gush Etzion, attended by rabbonim, community leaders, and ministers and Knesset members. The levayah was preceded by heartfelt Selichos, recited in unison by the many who attended.

“Where can we find words to describe what has happened,” said Rabbi Yonah Fuld, father of Ari, in his hesped. “In our lifetime, most people can speak of one hero in their lives. You, the family, must know that you had a hero, not just in death, but in life. There is crying not only in Eretz Yisrael, but all over the world. Ari impacted on people all over the world. We have received tens of thousands of messages, even from Saudi Arabia.”

Ari “was taken by surprise,” said Rabbi Fuld. “He had love for his family, for Eretz Yisrael, for the Torah. He was a hero to all. He took such pride in his children, he was dedicated to all of klal Yisrael. Sometimes I would wake up at three in the morning and find him defending Eretz Yisrael to Jews and non-Jews all over the world,” he said, referring to Fuld’s hasbarah efforts. “When we asked him when he is going to stop, he would answer ‘with my last breath.’ Every fiber of his body was so strong, so full of life. He celebrated every moment of life. How that voice could be silenced is unbelievable.”

Fuld, 40, a father of four, was murdered earlier Sunday at the entrance to a shopping center at the Gush Etzion Junction, His murderer, 16 year old Halil Jabarin, stabbed Fuld in the chest, wounding him critically. Fuld managed to shoot Jabarin before falling to the ground. Jabarin was eliminated when another Israeli shot at him. Fuld was then taken to the hospital in Yerushalayim, where he passed away a short time later.

The terrorist was eliminated by a shot fired by Gabi Vaknin, a resident of Gush Etzion. “I heard someone yelling ‘terror act,’ and I saw someone waving around a knife over his head and making stabbing motions. The terrorist started yelling in Arabic and began running. The victim shot at him, as I did, and he was neutralized.”

Tributes poured in from all sectors over the murder. Two hours before the levaya, Prime Minister Binyamin Netanyahu, Education Minister Naftali Bennett, and Knesset Speaker Yuli Edelstein visited the home of the Fuld family in Gush Etzion. Mr. Netanyahu said in a social media post later that he had “met the wonderful parents and siblings of the fallen hero of Israeli Ari Fuld H”yd. I embraced them in the name of all Israel during their time of sorrow. We live in this country today only because of heroes like Ari.”

Bennett spoke with the family and heard from them about Fuld’s immigration to Israel, and the story of the family that survived the Holocaust. “He was a hero in his death, saving others,” Bennett told them. The victim’s parents, Rabbi Yonah and Miriam Fuld, discussed with Bennett Ari’s activities on behalf of Israel, especially in the areas of hasbarah and fundraising. Ari was active on social media, presenting videos and images promoting tourism to Israel and especially Judea and Samaria.

Edelstein said that he was “moved to hear how my rav, Rabbi Yonah Fuld, spoke about his son H”yd. When you see a wonderful family like this you understand how a hero like this can grow out of it.”

Deputy Defense Minister Eli Ben-Dahan said that “Ari was a brave Jew who worked on behalf of the Jewish people, both in hasbarah and in security. And even when he was injured in the terror attack he continued to act bravely, shooting and neutralizing the terrorist.”

Earlier, IDF Chief of Staff Gadi Eisenkott said that “it is very difficult to accept this tragedy. Ari did not go as a lamb to the slaughter, but even as he sacrificed his life, he saved others by shooting at the terrorist. He fought until his last moments. I have never seen a display of bravery as I saw today. He lived as a hero and died as one.”

Jabarin was a resident of the village of Yatta in the southern Chevron Hills, a village that has been hme to numerous terrorists. Israeli media reports said that Jabarin’s parents had contacted Palestinian Authority police to warn them that their son was planning to commit a terror attack. Jabarin did not have a record of previous arrests for security violations. Palestinian Authority chief Mahmoud Abbas issued a statement saying that “the Palestinian side is committed to non-violent resistance. Murder, occupation and forcing people off their land will not lead to peace and security for either side.”