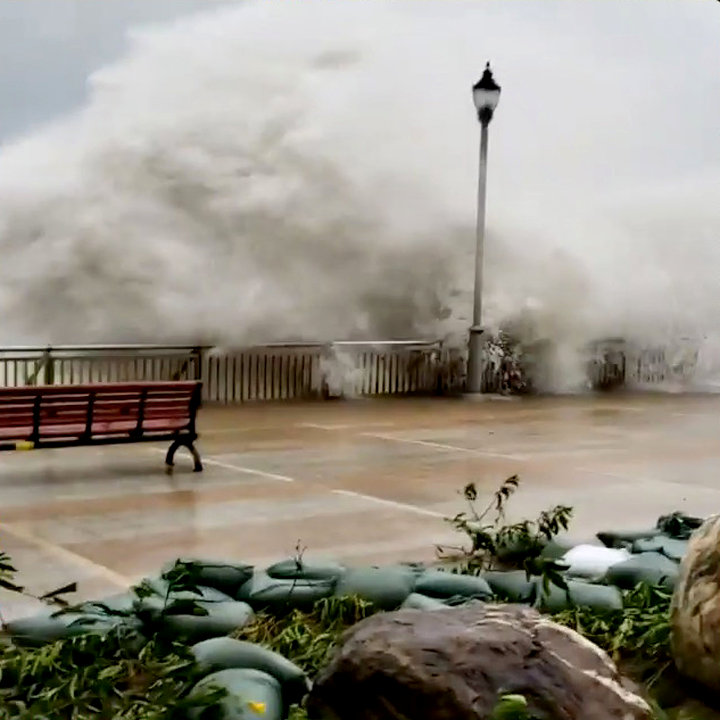 A super typhoon swirled past Hong Kong on Sunday, barreling towards the Chinese coast and gaining strength over the South China Sea after it wreaked havoc in the Philippines and killed at least 29 people.

Packing gale force winds of more than 125 mph, tropical cyclone Mangkhut is considered the strongest to hit the region this year, equivalent to a maximum Category 5 “intense hurricane” in the Atlantic.

Mangkhut, the Thai name for Southeast Asia’s mangosteen fruit, was expected to skirt 62 miles south of Hong Kong and veer west towards the coast of China’s southern Guangdong province, and Macau.

Hong Kong raised its highest No. 10 typhoon signal at mid-morning as ferocious winds uprooted trees and smashed windows in office and residential buildings, some of which swayed in the gusts, residents said.

Water levels surged 12 ft in some places, waves swamped roads and washed up live fish, washing into some residential blocks and a mall in an eastern district.

“It’s the worst I’ve seen,” resident Martin Wong told Reuters. “I’ve not seen the roads flood like this, (and) the windows shake like this, before.”

The plans of tens of thousands of travelers were disrupted by flight cancellations at Hong Kong’s international airport, a major regional hub. Airlines such as flagship carrier Cathay Pacific cancelled many flights last week.

Philippine authorities said a baby and a toddler were among the 29 dead, most of them in landslides in mountainous areas that left at least 13 missing.

“The landslides happened as some residents returned to their homes after the typhoon,” disaster response coordinator Francis Tolentino told DZMM Radio, adding that most of the 5.7 million people affected had made advance preparations.

“It was not so severe as we expected it to be because earlier it was noted it would also be strong,” said President Rodrigo Duterte, following an aerial survey of some affected areas.

The typhoon, dubbed the “King of Storms” by Chinese media, is expected to make landfall in Guangdong between the cities of Taishan and Yangjiang as early as 5 p.m., weather officials say.

Ports, oil refineries and industrial plants in the area have been shut. Power to some areas could also be reduced as a precaution, say grid operators.

The storm has fueled concern about sugar production in Guangdong, which accounts for a tenth of national output, at about 1 million tonnes. China sugar futures rose last week on fears for the cane crop.

The airport in the boomtown of Shenzhen has been shut since midnight, and will be closed until 8:00 a.m. (2400 GMT) on Monday. Flights have been cancelled in Guangzhou and the neighboring island province of Hainan.

Mangkhut’s northwesterly track will bring heavy rain and winds to the autonomous region of Guangxi early on Monday, before it weakens into a tropical depression to reach southwestern Yunnan next day.