National Much of Carolinas Awash After Hurricane Florence Moves In
National 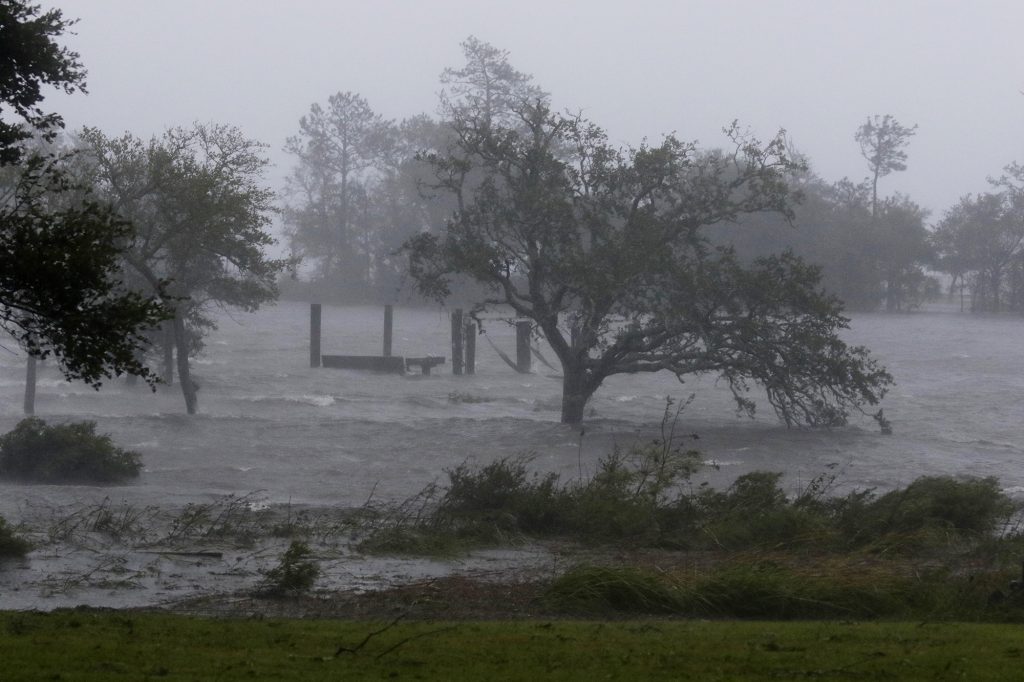 Hurricane Florence crashed into the Carolinas on Friday with 90-mph winds, torrential rains and a powerful storm surge before slowing to a pace that meant it would plague the area with days of flooding.

The hurricane’s storm surge – the wall of water it pushed in from the Atlantic – had “overwhelmed” New Bern, a town of about 30,000 people next to the Neuse River, North Carolina Governor Roy Cooper said.

“The sun rose this morning on an extremely dangerous situation and it’s going to get worse,” he said at a news conference in Raleigh. “To those in the storm’s path, if you can hear me, please stay sheltered in place.”

Cooper said Florence would “continue its violent grind across the state for days.”

No storm-related deaths or serious injuries were reported in the hours immediately after Florence hit but authorities said more than 60 people, including many children and pets, had to be evacuated from a hotel in Jacksonville, North Carolina, after strong winds caused parts of the roof to collapse.

The center of the hurricane’s eye came ashore at about 7:15 a.m. ET near Wrightsville Beach close to Wilmington, North Carolina, with sustained winds of 90 miles per hour, the National Hurricane Center said.

By 11 a.m. the winds had dropped to 80 mph and the center was about 5 miles inland, 20 miles southwest of Wilmington, and moving west at a sluggish 3 mph.

Cooper said Florence was set to cover almost all of the state in several feet of water. As of Friday morning, Atlantic Beach, a town on North Carolina’s Outer Banks barrier island chain, already had received 30 inches of rain, the U.S. Geological Service said.

National Weather Service forecaster Brandon Locklear predicted Florence would drop up to eight months’ worth of rain in two or three days.

Authorities in New Bern said more than 100 people had to be saved from floods and that the downtown area was underwater. The town’s public information officer, Colleen Roberts, told CNN 150 more people were awaiting rescue.

Helping with rescues there were members of the so-called Cajun Navy, a group of Louisiana-based volunteers who became famous during last year’s Hurricane Harvey, locals said on Twitter.

Florence also blew down trees, including one that went through the roof of Kevin DiLoreto’s home in Wilmington. He said all roads leading to his neighborhood were blocked by fallen trees.

“It’s insane,” he said in a phone interview. “Everybody laughs at the fact that this storm got downgraded … but I’ve never seen tree devastation this bad.

“Afterwards, I’m going to drink a bottle of whiskey and take a two-day nap, but right now I’m walking the neighborhood and making sure my neighbors are fine, because nobody can get in here.”

More than 485,000 homes and businesses were without power in North and South Carolina early on Friday, utility officials said. Utility companies said millions were expected to lose power and restoration could take weeks.

Florence had been a Category 3 hurricane with 120 mph winds on Thursday but dropped to Category 1 before coming ashore. It is expected to move across parts of southeastern North Carolina and eastern South Carolina on Friday and Saturday, then head north over the western Carolinas and central Appalachian Mountains early next week, the NHC said. Significant weakening is expected over the weekend.

About 10 million people could be affected by the storm and more than 1 million were ordered to evacuate the coasts of the Carolinas and Virginia.

Some 20,000 people had taken refuge in 157 emergency shelters, Cooper said.