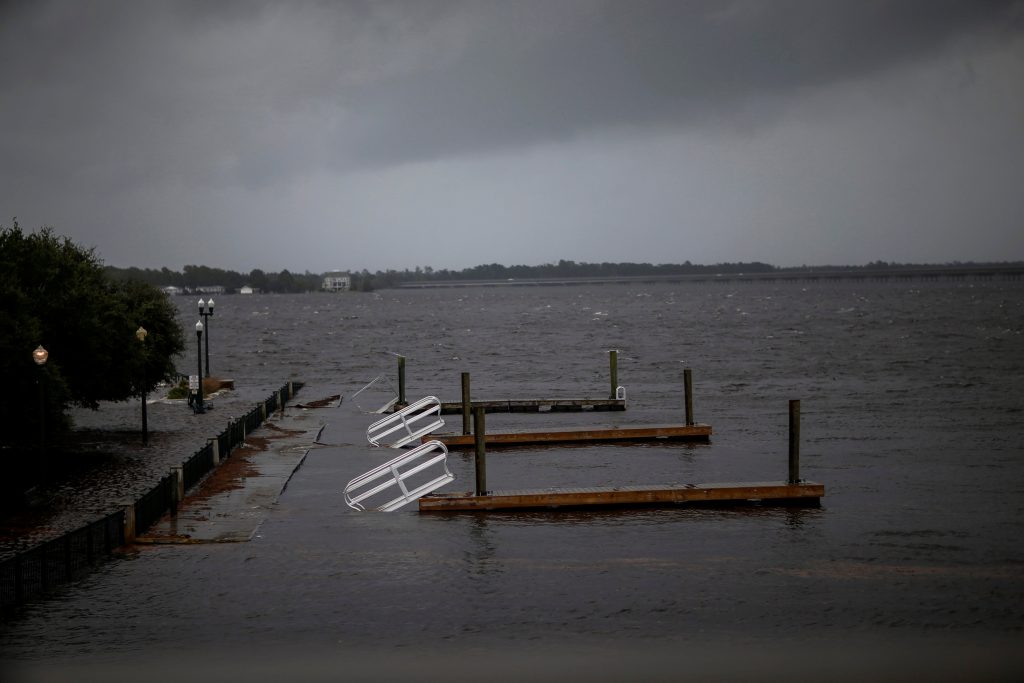 Heavy rain, wind gusts and rising floodwaters from Hurricane Florence swamped the Carolinas early on Friday as the massive storm crawled toward the coast, threatening millions of people in its path with record rainfall and punishing surf.

Florence was downgraded to a Category 1 storm on the five-step Saffir-Simpson scale on Thursday evening and was moving west at only 6 mph (9.6 kph).

The hurricane’s sheer size means it could batter the East Coast with hurricane-force winds for nearly a full day, according to weather forecasters. Despite its unpredictable path, it was forecast to make landfall near Cape Fear, North Carolina, at midday on Friday.

North Carolina Governor Roy Cooper told a news conference that the “historic” hurricane would unleash rains and floods that would inundate almost the entire state in several feet of water.

National Weather Service forecaster Brandon Locklear said in a video briefing North Carolina would see the equivalent of up to eight months of rain in a two- to three-day period.

Early on Friday, the downtown area of the city of New Bern, on the Trent and Neuse rivers near the North Carolina coast, was underwater as emergency crews conducted several rescues, according to reports on social media.

A gauge in the city of 30,000 people showed the Neuse River was recording 9.6 feet (2.9 meters) of inundation, the National Hurricane Center (NHC) said.

At least 150,000 people were without power in North Carolina early on Friday with the brunt of the storm yet to come, according to utility companies. Millions were expected to lose power from the storm and restoration could take weeks.

Florence’s top winds were clocked on Thursday evening at 90 mph (144.8 kph) as it churned in the Atlantic Ocean, down from a peak of 140 mph earlier this week when it was classified as a Category 4 storm.

The storm’s center was about 50 miles south of Morehead City early Friday.

About 10 million people could be affected by the storm and more than 1 million had been ordered to evacuate the coasts of the Carolinas and Virginia, jamming westbound roads and highways for miles.

At least 12,000 people had taken refuge in 126 emergency shelters, Cooper said, with more facilities being opened.

The NHC warned the threat of tornadoes was increasing as Florence neared shore and South Carolina Governor Henry McMaster said the heavy rain could trigger landslides in the west of his state.

NHC Director Ken Graham said on Facebook the storm surges could push in as far as 2 miles. Heavy rains were forecast to extend into the Appalachian Mountains, affecting parts of Alabama, Tennessee, Kentucky and West Virginia.

Emergency declarations were in force in Georgia, South and North Carolina, Virginia, Maryland and the District of Columbia.