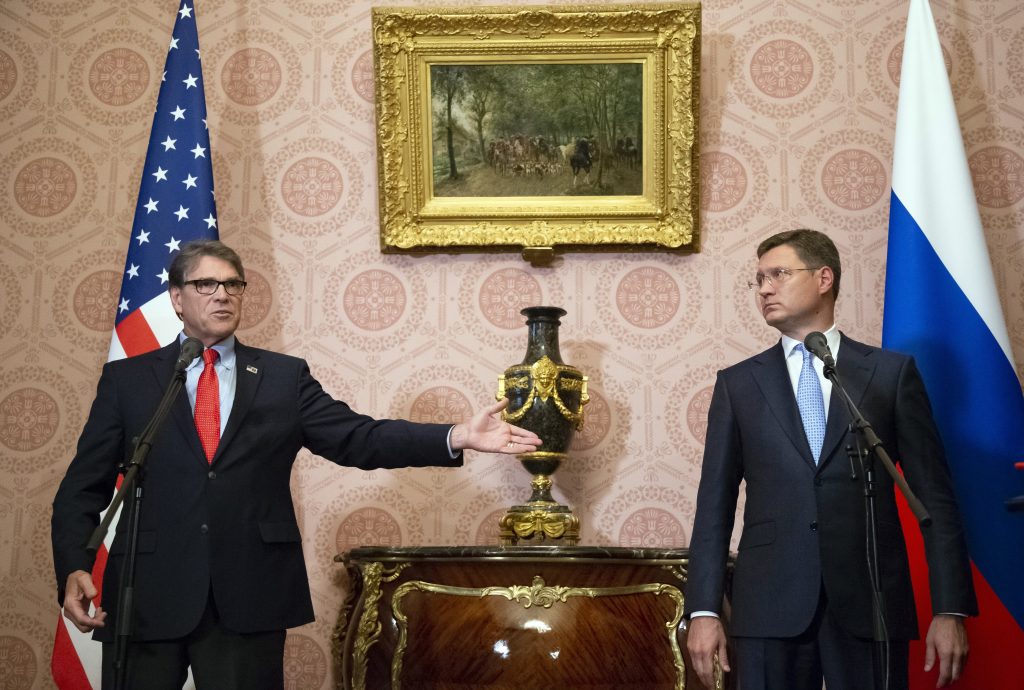 Asked whether sanctions on the undersea Nord Stream 2 pipeline are possible and if further energy-related sanctions are planned, Perry said: “Yes to your first question and yes to your second.”

Eastern European countries and the U.S. oppose the pipeline on the grounds that it would increase Europe’s energy dependence on Russia. The U.S. is also interested in selling more of its liquefied natural gas in Europe.

Speaking at a meeting with Russian Energy Minister Alexander Novak, Perry said the U.S. does not want to impose the sanctions and indicated they were not imminent.

“Minister Novak and I both agree that getting to that point where sanctions would be engaged is not where we want to go,” Perry said.

He declined to specify what level of progress on Nord Stream 2 could trigger sanctions, or what form they might take.

“This project will continue to be implemented,” said Novak, adding that Russia was concerned by Perry’s comments.

“We are concerned with the statements made and with the general position with regard to future sanctions against a very competitive project which is in the interests of European consumers,” he said.

Perry said Nord Stream 2, which will run alongside an existing pipeline, would “create a new choke point at a shallow depth vulnerable to disruption.” He called on Russia “to stop using its resources for influence and disruption.”

Perry added the U.S. supports “the desire of Europeans to minimize their dependence on a single energy supplier” and supports increased competition on gas including producers like Azerbaijan.

Novak replied that Russia shares the view that “energy cannot be a tool to exercise pressure and that consumers should be able to choose the suppliers.”

Analyst Chris Weafer of Macro-Advisory, a consultancy, said sanctioning the Russian energy sector over Nord Stream could be difficult because of its vast size and dominant market position in Europe. Instead, Weafer argues, the U.S. may try to cut a deal.

“When (U.S. President Donald) Trump came to Europe in July, practically the first thing he said when he got off the plane was to condemn Nord Stream 2. It raised the idea that there was some sort of barter possibility on Nord Stream and maybe they are willing to ease up on Nord Stream pressure in exchange for something from the Russians.”

The 764-mile pipeline is led by Russia’s state-owned gas company Gazprom along with other European investors. Work is under way to prepare the seabed, though the pipeline’s route through or around Danish waters is uncertain because the project has yet to receive a permit.

Even though Russia shows no sign of halting construction on the pipeline, both Perry and Novak said their talks had made unspecified progress on various issues.

“No obstacles are insurmountable,” Novak said.