Business AUTO REVIEW: Are You Brave Enough to Buy the 2019 Kia Forte?
Business 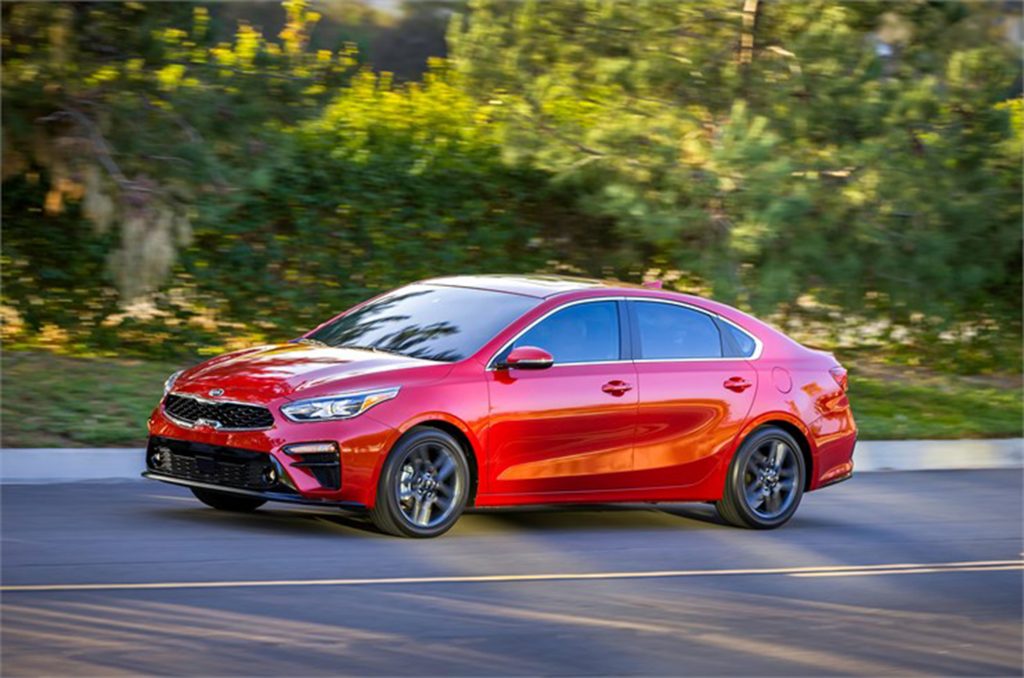 Brands and their mystique hold power over consumers, promising a lifestyle benefit even if it’s not entirely true. After all, you can wear Nike sneakers or an Under Armour t-shirt, but they won’t make you any more fit. Similarly, buying a Ralph Lauren outfit that mimics the look of old money won’t make your bank account any fatter, although it fools the unsuspecting.

Which brings us to the 2019 Kia Forte sedan.

During this model’s introduction last week in Pittsburgh, a BMW 5 Series pulled up alongside this new compact four-door. But here’s what’s so surprising: If you didn’t know the price difference between the two cars, you wouldn’t think the Forte started at one-third of the price of the BMW. The 2019 Forte’s styling is so sophisticated, you could mistake it for something spendier.

The fourth-generation Forte owes its exterior élan to Kia’s European styling studio, which endowed the Forte with its sporting look, one that bears some resemblance to the Optima, although Kia is hoping you’ll see Stinger influence in its looks. That’s stretching a point.

Peek inside and you’ll find a modern interior that exchanges the previous model’s dowdiness for a sophisticated minimalism that lends the cabin a spacious feel. A fixed 8-inch screen that controls Kia’s intuitive infotainment system anchors the center of the horizontally oriented instrument panel. A row of buttons underpins the screen, giving you quick access to the radio, navigation or other functions. Below that resides the dual automatic climate control, which is standard, and a rarity in this class.

The Forte EX test car featured a two-tone leather/pleather interior, along with stitched trim along the instrument panel — an upscale touch.

There’s ample room for four full-size adults. Legroom is generous up front, and above average for a compact in the rear. The seating position in the second row is pleasingly high, although those with long torsos may find headroom tight in the back. Cargo space is generous at 15.3 cubic feet.

Given that the Atkinson Cycle engine is rated at 147 horsepower, you wouldn’t expect the Forte to be as sprightly as it proves to be, although overall acceleration is merely average. Interestingly, the Forte’s Sport driving mode, offered alongside Normal and Smart driving modes, learns your driving style and switches between normal and sport modes automatically. Kia’s new continuously variable automatic transmission, its first, provides an ideal balance between performance and fuel economy, returning 33 mpg during the test drive.

Unlike most continuously variable transmissions (CVTs), the Kia’s unit was developed in-house and employs a chain belt to improve efficiency, so there’s little of the delay you typically experience with CVTs. There’s little waiting for the CVT to decide which gear ratio to choose. Also, it can be shifted manually, which works very well. Only on extreme uphill climbs will you remember it’s a CVT. Otherwise, its performance is so adept, you’ll forget it’s a CVT. It’s easily the best one on the market.

As impressive as the Forte is, it’s the ride and handling that is its biggest surprise. Thanks should go to Albert Biermann, who once spent his days running BMW’s M division. You can sense his DNA in this car’s feel. OK, it’s not a sports car, but the front-wheel-drive Forte possesses exceptional compliance and composure. Perhaps this is why Kia chose Pittsburgh to show off its newest compact star. Ride quality is exceptional for the class. Bumps are noticed, but not felt, except for the very worst of them. There are no excess body motions after traversing bumps, no undue rebound. Even body lean is modest. Couple that with its exceptionally quiet ride, engine and exhaust, and you’ll find a car that’s capable yet quiet.

In fact, the Kia Forte almost everything was either pleasing or better than expected. It’s too bad that brands can blind us to the true value of a product. There’s little doubt that if you’re considering a Toyota Corolla, Chevrolet Cruze or Nissan Sentra you’d be better off buying the Kia Forte. But you won’t of course. A Kia? What would the neighbors say?

Don’t let the brand name put you off; the 2019 Kia Forte is one of the best compact sedans you can buy. Look for it when it goes sale shortly.