Lessons From the Rabbis’ March 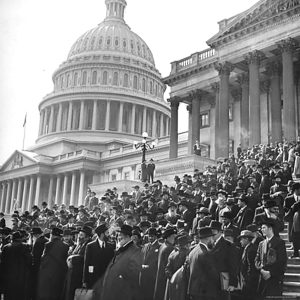 Seventy-five years ago this week, three days before Yom Kippur 5702/1943, more than four hundred Rebbes and Rabbanim left their homes and kehillos from throughout the United States to march on the U.S. Capitol in Washington D.C. Their mission, undertaken in the midst of the Holocaust, was literally one of life and death: They came to beg the American government to take concrete action to save the surviving Jews from the Nazi death trap.

The unprecedented march was the brainchild of Hillel Kook, a leading Revisionist Zionist, who at the time used the pseudonym Peter Bergson. He originally came to the United States to raise money for the Irgun, but when he learned of the fate of the Jews in Nazi-occupied Europe, he founded the Emergency Committee to Save the Jewish People of Europe, and devoted himself to doing all he could on their behalf.

Bergson and his small group of associates dubbed the Bergsonites were determined to publicize the plight of European Jewry and pressure the Roosevelt administration to take action. Their actions incurred the wrath of the mainstream secular Jewish leadership in America, who disagreed not only with their tactics, but even with the worthiness of their cause.

While he was hounded by the Jewish establishment, Bergson found willing allies in the Orthodox Jewish community. Though they had distinctly differing opinions in many areas, when it came to saving Jews, they had the same priorities.

Known as the “Rabbis March,” the mission to Washington was jointly organized by Agudas Harabbanim, led by Harav Eliezer Silver, zt”l, and the Agudas Ha’admorim, led by the Boyaner Rebbe, Harav Mordechai Shlomo Friedman, zy”a.

The secular Jewish leadership tried their hardest to convince the Rabbanim not to come, with even local Jewish congressmen joining the efforts to dissuade them. Within the Orthodox Jewish community as well there was open skepticism about the idea. Many of the marchers were new immigrants who had recently arrived themselves, and didn’t even speak English. There were those who saw it as “inappropriate” for “bearded rabbis” to be seen in public, and others who argued that emphasizing the plight of Jews at a time when America was at war with the Nazis would cause anti-Semitism in America.

At first, the naysayers appeared to be right, and the effort was widely deemed a failure — at least as far as the temporal world was concerned.

Many of the participants were bitterly disappointed by the fact that not only did President Roosevelt refuse to meet with them, but even Vice President Wallace, who spoke with them on the steps of the Senate building, did not invite them in, giving instead only a vague statement expressing “grief” at the plight of the Jews, and making no mention of rescuing any of them.

However, we now know that the march played a key role in saving tens of thousands of Jews.

Media coverage of the march, expressing outrage over the way the esteemed Rabbanim were treated, helped to increase pressure on the Roosevelt administration to save at least some of the ever-dwindling number of Jews in Nazi-occupied Europe.

The Rabbis’ March was a key element in a media campaign carefully orchestrated by Bergson and his associates. Eventually — following the intervention of Treasury Secretary Henry Morgenthau, Jr., and an initiative by Congress to act on the matter — Roosevelt issued an executive order in January 1944 creating the War Refugee Board (WRB), an official U.S. government agency whose stated purpose was to rescue refugees from Hitler’s Europe.

Among the most important accomplishments of the WRB occurred six month later, when Iver Olson, the WRB’s newly appointed representative in Sweden, met Kalman Lauer, the owner of an import-export firm. He told Lauer that the WRB was anxious to send someone to Budapest to see what could be done to save the remaining Jews of Hungary. The Nazis would never let in an American, so he was looking for someone from a neutral country like Sweden who would agree to undertake a very dangerous mission.

Lauer told Olson about one of his employees, 31-year-old Raoul Wallenberg, a member of the wealthiest family in Sweden. Wallenberg, perhaps the greatest of the chassidei umos ha’olam in recent history, at great personal peril and with unparalleled heroism, saved the lives of up to 100,000 Hungarian Jews.

Among the other Rebbes present that day on the Washington Mall was my grandfather, the Kopyczynitzer Rebbe, Harav Avraham Yehoshua Heschel, zy”a. A list of those who had confirmed plans to attend also included my father, Harav Moshe Mordechai Heschel, zy”a, who would later succeed his father as Rebbe, but was still a teenager at that time, as well as my uncle, Rabbi Zalman Gurary, z”l. Another young participant was my wife’s grandfather, Harav Chaim Twersky, zt”l, who would later be known as the Chernobler Rav, zt”l.

Another participant, Harav Alter Safrin, the Kamarna Rebbe of Boro Park, zt”l, described to me the incredible hisorerus he felt sitting in a train car on the way to Washington, watching my grandfather and the Boyaner Rebbe tearfully reciting Tehillim.

I have often wondered about the lessons that we can learn from this seminal event. One obvious one is — as mentioned — the fact that while we often don’t immediately see the fruits of hishtadlus, no good deed ever goes to waste.

Another vital lesson is the fact that even in — and perhaps especially in — the realm of hishtadlus in governmental affairs, all decisions must be made solely by daas Torah, and not by even the best-intentioned askanim. In many ways, the Rabbis’ March was one of the most “politically-incorrect” things to do, and indeed, the Jewish politicians of the era were vehemently opposed to it. Yet the leading Rebbes and Rabbanim in America at the time felt otherwise, and it was they who made the decision to march.

Finally, let us bear in mind that while the Orthodox Jewish community has come a long way when it comes to building bridges and establishing connections with government officials, that does not mean anything is guaranteed. It is our fervent tefillah that Klal Yisrael will never again face a situation like the one we faced in 1943, and no threat we currently face can possibly be compared to it. At the same time, our long sojourns in exile have taught us that there are no guarantees. Wide-open doors in the corridors of government can quickly slam closed on us, and even those we long thought of as allies and friends can turn against us at any time. We must of course undertake the requisite hishtadlus, but we must also always remember never to rely on mortal connections or political alliances, but only on the mercy of the Ribbono shel Olam.