On Eve of Election, Simcha Felder Racks Up Unprecedented Endorsements 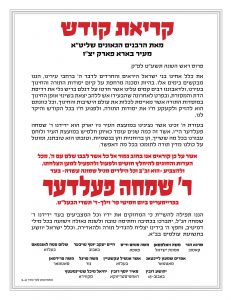 For many years they avoided weighing in on political races, and left making political endorsements to askanim. But as our community is facing unprecedented challenges to our ability to educate our children according to our mesorah, Rabbanim and Dayanim, shlita, of the 10 largest kehillos in Boro Park took the unprecedented step of signing a kol korei declaring that it is an “obligation” to vote for State Senator Simcha Felder for the Democratic nomination in the 17th Senate District.

“B’ezras Hashem, we have merited that our friend Reb Simcha Felder, our representative in the [State Senate], has stood strong like a rock fighting for us in every way possible, both in spiritual and material matters. His success is our success, and we all have an obligation according to the Torah to support him in every possible manner,” the Rabbanim wrote.

“Therefore, we issue a call that it is a chov gamur on all whose heart is whole with Hashem from all the communities … for men and women to vote for Simcha Felder in the primary this Thursday Parashas Vayeilech, the fourth of Tishrei.”

While tax-exempt institutions are prohibited by law from making endorsement’s in a political race, religious leaders are permitted to do so as long as the endorsement is not done in official organization publications or at official organization functions. In this case, since the Rabbanim signed in an individual capacity, their official positions were not delineated.

The 17th Senate District encompasses much of Boro Park and parts of Midwood and Bensonhurst.