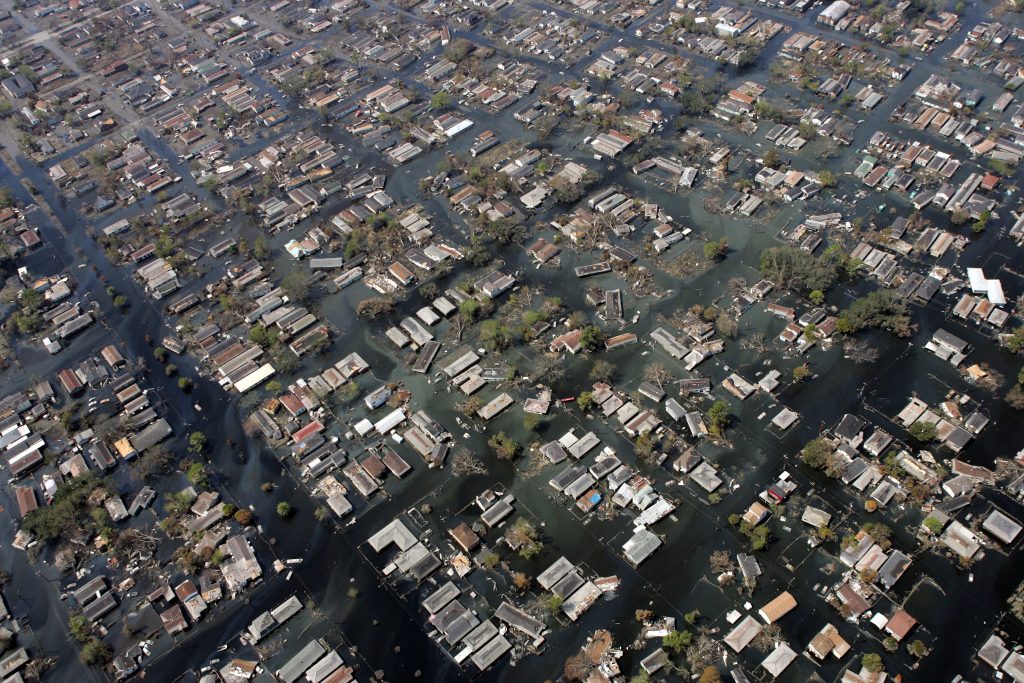 A fictional “Hurricane Cora” barreled into southeast Virginia and up the Chesapeake Bay to strike Washington, D.C., in the narrative created by the Federal Emergency Management Agency and Argonne National Laboratory.

The result was catastrophic damage, which has some experts concerned that Hurricane Florence could produce a disaster comparable to 2005’s Hurricane Katrina and in a part of the country that is famously difficult to evacuate.

The simulated hurricane knocked out power for most gas stations in the Mid-Atlantic region, damaged a nuclear-power plant and sent debris into major shipping channels, among other problems, according to a Department of Energy simulation manual.

“What they were trying to do was create a worst-case scenario, but it’s a very realistic scenario,” said Joshua Behr, a research professor at Virginia’s Old Dominion University who is involved in disaster modeling and simulations.

Senior leaders from the White House, along with more than 91 federal departments and agencies, participated in the “national level exercise” in late April and early May, FEMA said.

The fictional storm made landfall in the heavily populated Hampton Roads region, bringing a 15-foot storm surge and up to 9 inches of rain to some areas within the first six hours. That cut off main routes — used for escape as well as for rescuers — in the Hampton Roads area and elsewhere.

In the scenario, Cora also slammed hurricane-force winds into three nuclear-power stations. One was damaged. Thirty-three major power substations were at risk from storm surge and major flooding.

The make-believe hurricane threatened hundreds of cell towers, and the area where power was knocked out included 135 data centers in Virginia and another 60 in Maryland.

The Cora scenario projected hurricane-force winds inflicting “catastrophic damage” to homes and significant damage to critical infrastructure within a 50-mile radius of the hurricane’s center.

The manual makes no mention of deaths and injuries, focusing instead on infrastructure.

Another striking similarity between the scenario and Hurricane Florence’s path: already saturated ground on that part of the Mid-Atlantic coast.

“What I fear is that saturation, combined with a storm that kind of stalls out,” said Behr, who has studied vulnerable populations in the paths of Hurricane Katrina on the Gulf Coast and in the Hampton Roads region.

If parts of the East Coast are deluged with water, it could result in a catastrophe on the scale of Katrina, Behr said. And recovering from a disaster in the Hampton Roads region would also parallel Katrina’s aftermath, he added.

“I believe that those patterns are also going to manifest in Hampton Roads if and when a large storm hits,” he said. “The vulnerability of our populations are quite similar to New Orleans. Displacement, pain, suffering, property loss. All those things are going to play out in a fashion that has parallels to how Katrina played out.”

Evacuation is known to be challenging in Hampton Roads, a coastal region inhabited by 1.7 million people in cities such as Norfolk, Virginia, and Virginia Beach.

“I’ve heard people say Virginia Beach is the world’s largest cul-de-sac in the sense that there are not a lot of ways to evacuate,” said Michelle Covi, an assistant professor of practice with Old Dominion University and Virginia Sea Grant, a science group that works with other universities in the region on coastal issues.

“You can’t go north because of the Chesapeake Bay,” she said. “You can’t really go south, and in this case you wouldn’t want to because the storm is that way. You generally want to go west, but again there are lots of water bodies.”

In Charleston, South Carolina, where the average elevation is only around 11 feet above sea level, storm surge and flooding from a hurricane’s drenching rain has the same effect — cutting off access, said Norman Levine, an associate professor at the College of Charleston.

“It inundates roads, and it ends up reaching the point where you become isolated little sea island communities,” he said.