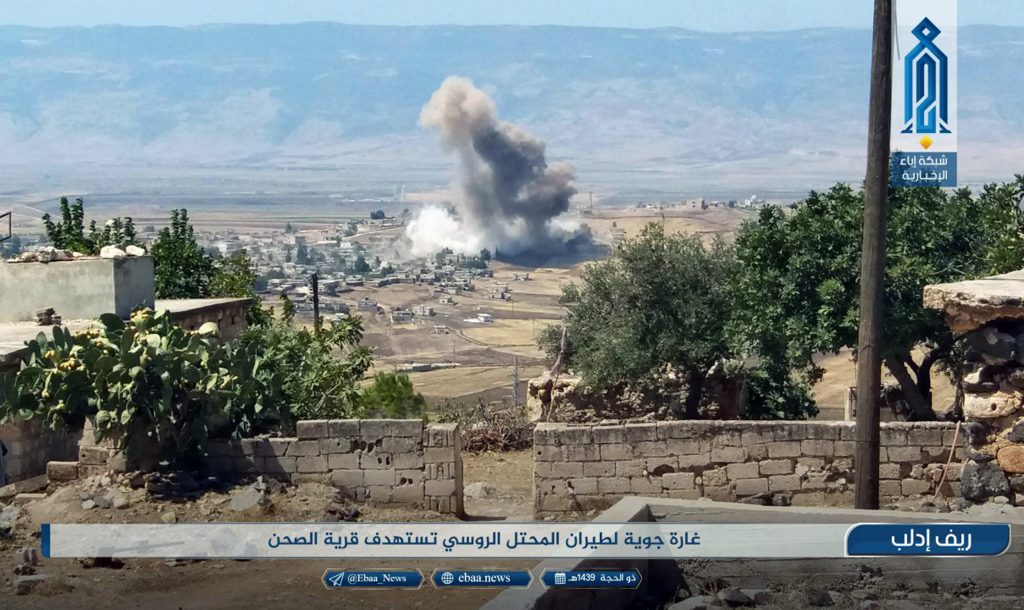 Russian and Syrian warplanes pounded towns in Syria’s opposition-held Idlib province on Saturday, a day after a summit of the presidents of Turkey, Iran and Russia failed to agree on a ceasefire that would forestall a Russian-backed offensive.

Idlib is Syria’s last major stronghold of active opposition to the rule of President Bashar al-Assad.

At least a dozen air strikes hit a string of villages and towns in southern Idlib and the town of Latamneh and Kafr Zeita in northern Hama where rebels are still in control, witnesses and rescuers said.

The Syrian army denies using barrel bombs. However, United Nations investigators have extensively documented their use by the army.

The Western-sponsored Syrian Civil Defense rescue service known as the White Helmets said they pulled four bodies, including a child, from the rubble of a building bombed by Russian planes in the village of Abdeen, near Khan Sheikhoun.

Russia says it avoids civilians and only targets radical al-Qaida inspired terror groups but opposition sources and residents say most of the casualties in the last few days were civilians.

The opposition accuse Russia and its allies of striking at hospitals and civil defense centers to paralyse life and force rebels to surrender in a repeat of earlier, large-scale military offensives.

Hundreds of civilians were killed in Russian-backed bombing campaigns on the former besieged rebel stronghold of Ghouta near the capital Damascus this year and a recent offensive in southern Syria displaced tens of thousands.

A hospital in the town of Hass was put out of service after it was bombed, a rescue worker said.

Rebels say the battle could be decisive and a defeat may bring the end of their over seven-year, armed rebellion against Assad.

“There is coordination and cooperation with all the fighting factions to defend our people,” Emad al Din Mojahed, spokesman for Hayat Tahrir al Sham, told Reuters.

Friday’s summit had focused on a looming military operation in Idlib.

Turkish President Tayyip Erdogan pushed for a ceasefire during the summit, but Russian President Vladimir Putin said a truce would be pointless as it would not involve Islamist terror groups Assad and his allies deem as terrorists.

Tehran and Moscow have helped Assad turn the course of the war against an array of opponents ranging from Western-backed rebels to Islamist terrorists, while Turkey is a leading opposition supporter and has troops in the country.

The United Nations fears a full-scale offensive could cause a humanitarian catastrophe involving tens of thousands of civilians.

The White House said this week that President Donald Trump had warned that such attacks would be “a reckless escalation of an already tragic conflict” and “risk the lives of hundreds of thousands of people.”

A U.S. State Department official said Washington was aware of reports of Russian and Syrian air strikes in Idlib in spite of warnings from the United States, the U.N. and others, and was closely monitoring the situation. “Russia claims that it is targeting terrorists, but observers reported that only civilian casualties resulted from the strikes,” the official said.

“This demonstrates that only a precise counterterrorism campaign can be effective. Indiscriminate regime and Russian military offensives will only continue to lead to humanitarian catastrophe,” the U.S. official added.

The State Department official said the United States was continuing to engage the Russian government and military at senior levels “to make clear that such escalation must be avoided.” The White House has warned that the United States and its allies would respond “swiftly and vigorously” if government forces used chemical weapons in the widely expected offensive.

Tens of thousands of Syrians living in rebel-held towns in Idlib took to the streets on Friday to protest the impending campaign vowing they would never accept Assad’s rule and would resist any offensive to retake opposition areas.