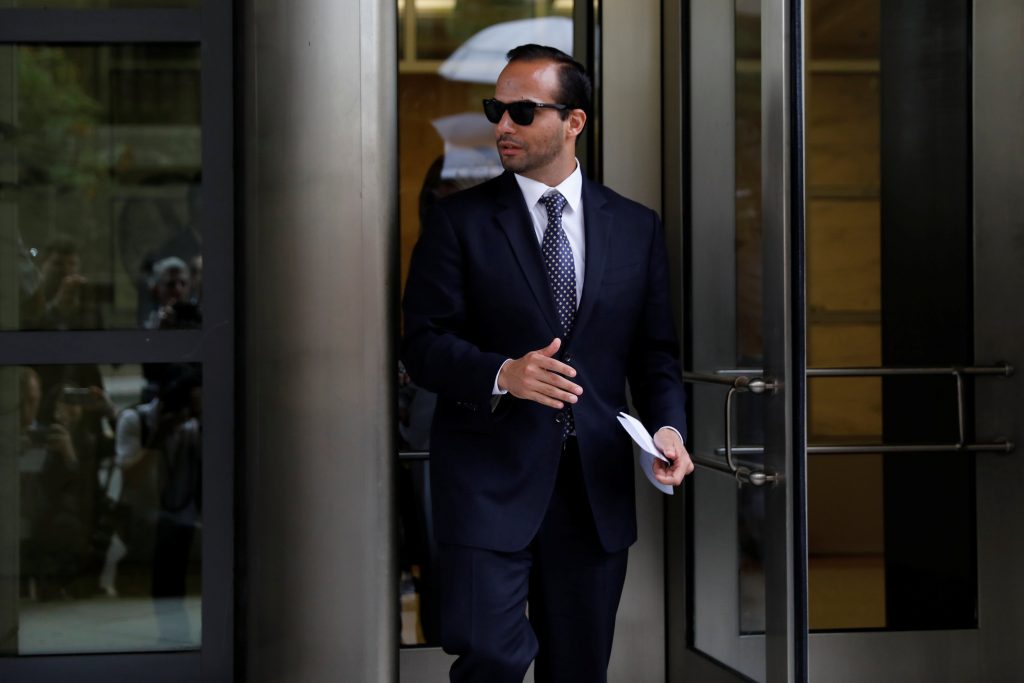 George Papadopoulos, a former aide to then-Republican candidate Donald Trump’s 2016 campaign, was sentenced on Friday to 14 days in prison after pleading guilty last year to lying to federal agents investigating whether campaign members coordinated with Russia before the election.

Prosecutors for Special Counsel Robert Mueller said Papadopoulos lied to agents about his contacts with Russians during the campaign “to minimize both his own role as a witness and the extent of the campaign’s knowledge of his contacts,” according to the government’s sentencing memorandum.

Among those contacts were London-based professor Joseph Mifsud, who told him the Russians had “dirt” on Trump’s Democratic presidential rival Hillary Clinton in the form of “thousands of emails.”

Papadopoulos defended himself and contradicted White House officials in a CNN special program.

In the interview with CNN, Papadopoulos said that he raised the prospect of Trump and his campaign officials meeting with the Russians.

“The candidate (Trump) gave a nod, but did not commit either way,” he said.

Trump has denied knowing anything about contact with Russians and his campaign.

Russia has denied U.S. allegations that it interfered in the campaign and Trump denies campaign collusion.

Prosecutors had asked Judge Randolph Moss in District Court for the District of Columbia to impose a prison sentence of up to six months, saying that Papadopoulos’ lies impeded their investigation and that he did not cooperate.

“He didn’t come close to the standard of ‘substantial assistance,'” prosecutor Andrew Goldstein told the judge at the sentencing hearing. “It was at best, begrudging efforts to cooperate.”

In addition to the prison time, Papadopoulos was sentenced to one year of supervised release and 200 hours of community service. He was also ordered to pay a fine of $9,500.

Friday was his first public court appearance since he pleaded guilty in October 2017 to lying to the FBI while the case was still sealed.

“I hope to have a second chance to redeem myself,” Papadopoulos told the judge.

“I made a dreadful mistake but I am a good man.”

He and his wife left the courthouse without speaking to the press.

The White House distanced itself from Papadopoulos, referring to his campaign role as nothing more than a low-level coffee boy, after his guilty plea.

The sentence that Papadopoulos received is about half the prison time given to Alex van der Zwaan, a lawyer who was also charged with lying to the FBI during the special counsel’s probe. Van der Zwaan was sentenced to 30 days in prison.

Moss said he wanted to impose some prison time because while he did not “remotely believe Mr. Papadopoulos was seeking to assist the Russian government,” he was nevertheless troubled by Papadopoulos’ selfish motives to lie to the FBI so that he would not lose a shot at getting a possible job in the Trump administration.

Ultimately, Moss said he felt Papadopoulos expressed genuine remorse. The judge who sentenced Van der Zwaan, by contrast, did not feel he was contrite about his crimes.

During Friday’s hearing, Papadopoulos’ attorney Thomas Breen went out his way to praise the FBI, and he also criticized Trump for calling the Russia probe fake news and a witch hunt.

“The president of the United States hindered this investigation more than George Papadopoulos ever could,” Breen told the judge.

He portrayed Papadopoulos as a naive young man who was “being worked by a pro,” a reference to Professor Mifsud, whom he later said he believes was working for Russia and trying to take advantage of his client.

“No offense, but he was unsophisticated, he was naive and he was foolish,” Breen said in court.

Papadopoulos told CNN that he hopes to return to politics in the future.

“I made mistakes and I will pay for my mistakes,” he said, adding, “I don’t want to give up my goal of staying in politics.”