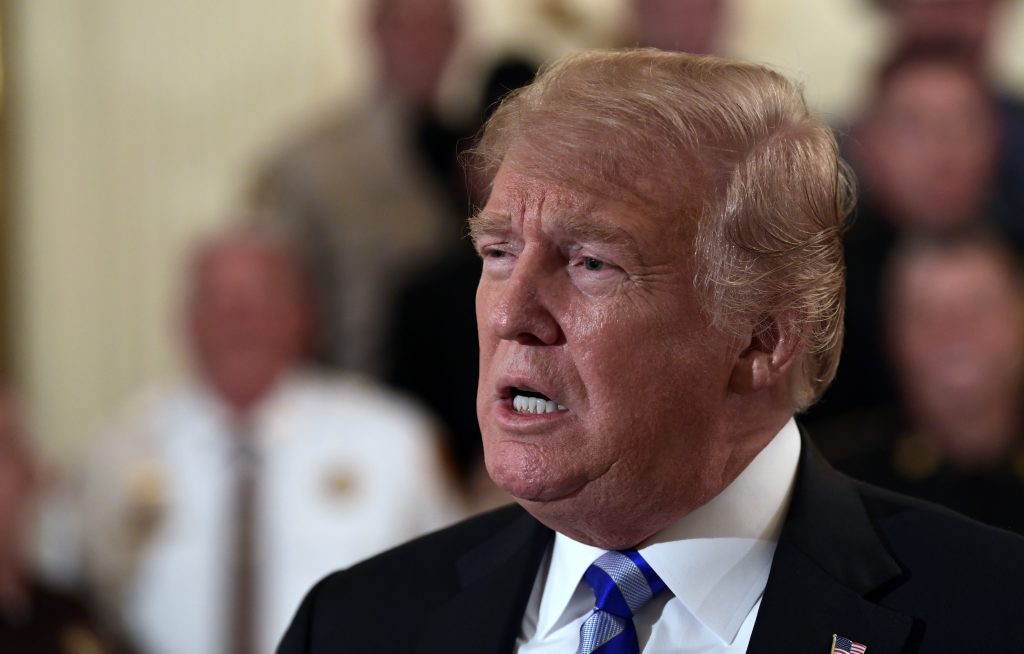 Pushing back against explosive reports that his own administration is conspiring against him, President Donald Trump lashed out against the anonymous senior official who wrote a New York Times opinion piece claiming to be part of a “resistance” working “from within” to thwart his most dangerous impulses.

Washington was consumed by a wild guessing game as to the identity of the author, and swift denials of involvement in the op-ed came Thursday from top administration officials, including from Vice President Mike Pence’s office, Secretary of State Mike Pompeo and Dan Coats, director of national intelligence.

Trump was furious, tweeting Thursday morning that “The Deep State and the Left, and their vehicle, the Fake News Media, are going Crazy – & they don’t know what to do.”

On Wednesday night, Trump tweeted a demand that if “the GUTLESS anonymous person does indeed exist, the Times must, for National Security purposes, turn him/her over to government at once!” White House press secretary Sarah Huckabee Sanders called on the “coward” who wrote the piece to “do the right thing and resign.”

White House officials did not immediately respond to a request to elaborate on Trump’s call for the writer to be turned over to the government or the unsupported national security grounds of his demand.

“This is not sustainable to have an executive branch where individuals are not following the orders of the chief executive,” Brennan told the NBC. “I do think things will get worse before they get better. I don’t know how Donald Trump is going to react to this. A wounded lion is a very dangerous animal, and I think Donald Trump is wounded.”

The anonymous author, claiming to be part of the “resistance” to Trump “working diligently from within” his administration, said, “Many Trump appointees have vowed to do what we can to preserve our democratic institutions while thwarting Mr. Trump’s more misguided impulses until he is out of office.

“It may be cold comfort in this chaotic era, but Americans should know that there are adults in the room,” the author continued. “We fully recognize what is happening. And we are trying to do what’s right even when Donald Trump won’t.”

Trump raged about the piece in the White House, calling around to confidants to vent about the disloyalty of the author and fuming that the so-called Deep State within the federal government had conspired against him, according to a person familiar with the president’s views but not authorized to discuss them publicly.

The text of the op-ed was pulled apart for clues: The writer is identified as an “administration official”; does that mean a person who works outside the White House? The references to Russia and the late Sen. John McCain — do they suggest someone working in national security? Does the writing style sound like someone who worked at a think tank? In a tweet, the Times used the pronoun “he” to refer to the writer; does that rule out all women?

The newspaper later said the tweet referring to “he” had been “drafted by someone who is not aware of the author’s identity, including the gender, so the use of ‘he’ was an error.”

The guessing game seeped into the White House, as current and former staffers alike traded calls and texts trying to figure out who could have written the piece, some turning to reporters and asking them for clues. For many in Trump’s orbit, it was stunning to realize just how many people could have been the op-ed’s author. And some of the most senior members of the Trump administration were forced to deny they were the author of the attack on their boss.

Hotly debated on social media was the author’s use of the word “lodestar,” which pops up frequently in speeches by Pence. Could the anonymous figure be someone in Pence’s orbit? Others argued that the word “lodestar” could have been included to throw people off.

In a rare step, Pence’s communications director Jarrod Agen tweeted early Thursday that “The Vice President puts his name on his Op-Eds. The NY Times should be ashamed and so should the person who wrote the false, illogical, and gutless op-ed. Our office is above such amateur acts.”

Pompeo, who was in India, denied writing the anonymous opinion piece, saying, “It’s not mine.” He accused the media of trying to undermine the Trump administration and said he found that “incredibly disturbing.”

Coats later issued his own denial; and with three prominent administration members delivering on-the-record denials, the focus could now fall on other senior aides to do the same, with questions raised about those who stay silent.

Trump, appearing at an unrelated event Wednesday at the White House, lashed out at the Times for publishing the op-ed.

Early Thursday, Trump followed up with a tweet that touted his administration’s accomplishments. His other morning tweets — one on North Korea, the other on the economy — seemed to be an effort to change the subject.

The anonymous author wrote in the Times that where Trump has had successes, they have come “despite — not because of — the president’s leadership style, which is impetuous, adversarial, petty and ineffective.”

The writer of the Times op-ed said Trump aides are aware of the president’s faults and “many of the senior officials in his own administration are working diligently from within to frustrate parts of his agenda and his worst inclinations. I would know. I am one of them.”

The writer also alleged “there were early whispers within the Cabinet of invoking the 25th Amendment” because of the “instability” witnessed in the president.