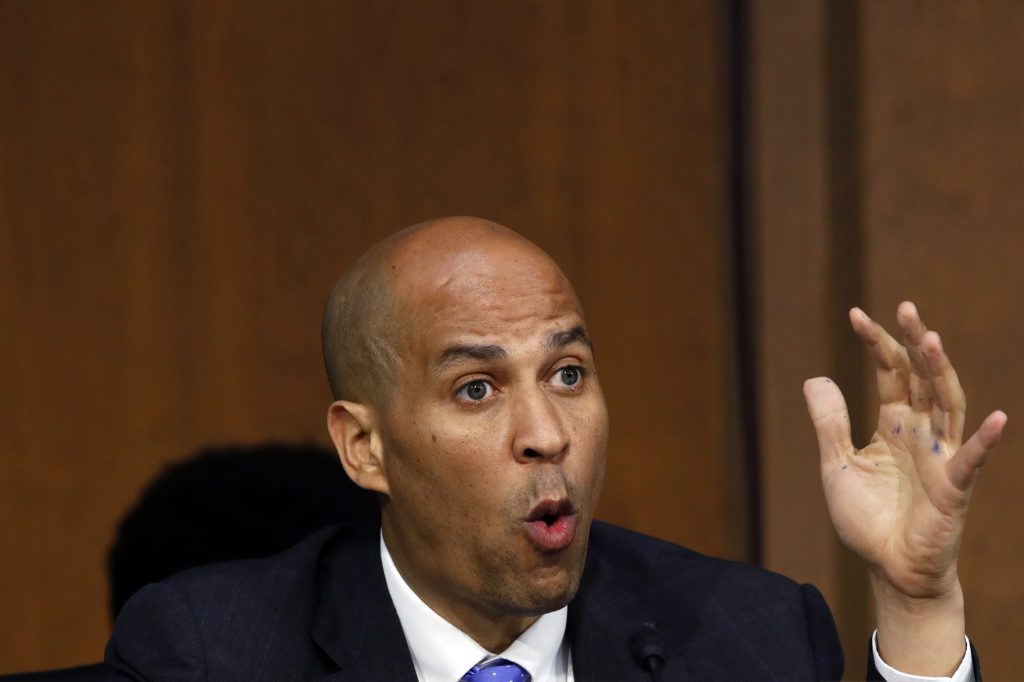 The finger-pointing over the unusual vetting process for Trump’s nominee made for a rough start for the final day of questioning of Kavanaugh who has so far avoided major missteps that could block his confirmation. Republican John Cornyn of Texas said senators could be expelled from office for violating confidentially rules, while Democrats led by Cory Booker of New Jersey responded, “Bring it on.”

Meanwhile it was shown, in an email obtained by The Associated Press, that Kavanaugh had taken a different tone on a 2003 case than he had during Wednesday’s hearing when he stressed how difficult it is to overturn precedents like Roe. In the email, Kavanaugh was reviewing a potential op-ed article in support of two judicial nominees while he was working at the George W. Bush White House, according to the document. It had been held by the committee as confidential.

“I am not sure that all legal scholars refer to Roe as the settled law of the land at the Supreme Court level since Court can always overrule its precedent, and three current Justices on the Court would do so,” Kavanaugh wrote, referring to justices at the time, in an email to a Republican Senate aide. The document is partially redacted.

Asked about it by the committee’s top Democrat, Dianne Feinstein of California, Kavanaugh reiterated his previous testimony that “Roe v. Wade is an important precedent of the Supreme Court.”

Pressed further by Republican Sen. Orrin Hatch of Utah, Kavanaugh denied he was questioning Roe as settled law. Kavanaugh said that he was not discussing his views, but rather “what legal scholars might say.” He said he offered the comments because he’s “always concerned with accuracy.”

The 15-year-old email underscored a dispute that has dominated part of the hearing over Kavanaugh’s unusually long paper trail stemming from his years in the Bush White House. The panel’s process resulted in hundreds of thousands of pages of Kavanaugh’s documents being withheld as confidential or kept from release under presidential privilege by the Trump White House.

Booker called the process “a bit of a sham.” He was chastised by GOP colleagues for having discussed a confidential document about Kavanaugh’s legal views on race. Cornyn said it was “irresponsible and conduct unbecoming a senator.”

Chairman Chuck Grassley, R-Iowa, released more documents Thursday — including those Booker wanted made public — and stood by his handling of Kavanaugh’s paper trail.

“My process was fair,” Grassley said as he opened the session.

So far, Kavanaugh appears on track toward confirmation in the Republican-held Senate, but after a 12-hour session Wednesday and more questioning Thursday, he also does not seem to have changed minds on the committee, which is split along partisan lines.

The judge left unanswered questions over how he would handle investigations of the executive branch and whether he would recuse himself if cases involving Trump under special counsel Robert Mueller’s probe end up at the court.

Trump says he’s pleased with his nominee’s performance, and Republicans are united behind him.

Late Wednesday evening, Kavanaugh seemed to stumble at first when questioned by Democrat Kamala Harris of California about whom he might have spoken with at a law firm concerning the investigation into Russian election meddling. The firm in question was founded by Marc Kasowitz, who has represented Trump.

Kavanaugh eventually said he couldn’t think of any such conversations but would need to see a list of the firm’s lawyers.

Asked about it again Thursday by Hatch, Kavanaugh did not fully clear up the situation. “I don’t recall any inappropriate conversations about the investigation,” he said.

Protesters have repeatedly tried to interrupt the hearing, which has carried strong political overtones ahead of the November congressional elections. Democrats lack the votes to block confirmation but have been pressing Kavanaugh for his views on controversial issues.

Senate Majority Leader Mitch McConnell bemoaned the protesters’ “unhinged antics” as powerless to stop Trump’s choice. “There’s no hecklers’ veto,” he said, in the Senate, which has been forced to cut short its business this week amid Democratic objections over the panel’s process.

Throughout his testimony, Kavanaugh has repeatedly insisted he fully embraces the importance of judicial independence. But he has refused to provide direct answers to Democrats who wanted him to say whether there are limits on a president’s power to issue pardons, including to himself or in exchange for a bribe. He also would not say whether he believes the president can be subpoenaed to testify. Still, he began his long day in the witness chair by declaring that “no one is above the law.”

Democrats are concerned that Kavanaugh will push the court to the right and that he will side with Trump in cases stemming from Mueller’s investigation of Russian interference in the 2016 election and possible ties to the Trump campaign. The 53-year-old appellate judge answered cautiously when asked about most of those matters, refusing an invitation from Democratic Sen. Richard Blumenthal of Connecticut to pledge to step aside from any Supreme Court cases dealing with Trump and Mueller’s investigation.

Kavanaugh had served as Bush’s staff secretary and his work in the White House has figured in the hearing. Democratic senators have fought for access to documents from his three years as staff secretary, saying those could shed light on his views about policies from that era, including the detention and interrogation of terror suspects. Republicans have declined to seek the papers, and instead have gathered documents from his work as White House counsel to Bush.

When questioned about the honesty of his 2006 testimony during his nomination for the appellate court when he said he was not involved in some Bush-era policies, Kavanaugh said he was “100 percent accurate.”