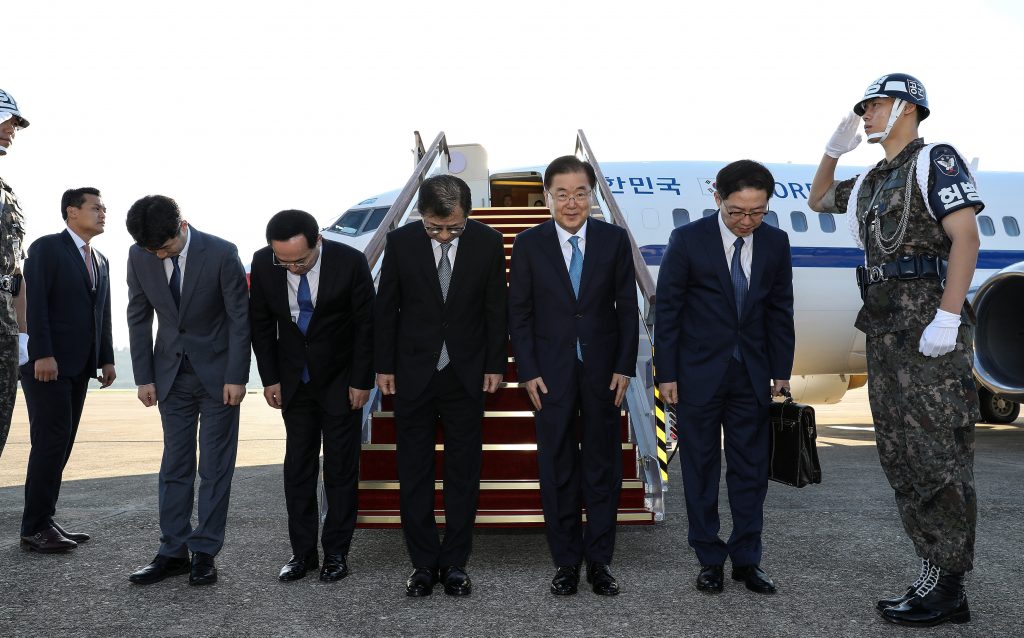 South Korean envoys held talks in North Korea on Wednesday to finalize details on a third North-South summit to be held this month amid stalled talks on denuclearization between the North and the United States.

South Korean officials hope the one-day visit will revive momentum after a broad but unspecific agreement on denuclearization between the United States and North Korea at a Singapore summit in June.

The envoys were greeted in Pyongyang by Ri Son Gwon, chairman of a North Korean committee in charge of cross-border affairs, who has steered high-level inter-Korean talks, according to Blue House press secretary Yoon Young-chan.

They held a 20-minute meeting with Ri and Kim Yong Chol, who played a key role with Pompeo in arranging the Singapore summit, Yoon said without elaborating.

Additional talks are expected to take place between the Seoul and Pyongyang officials, but it was not certain that the envoys would meet North Korean leader Kim Jong Un, Yoon said. Kim met the South’s delegation on their previous trip in March.

“The delegation was on the way for an official meeting but they did not inform whom they’ll meet and where,” Yoon said in a statement.

The United States and North Korea are at odds over whether denuclearization or a step towards the normalization of North Korea’s international status by declaring the end of the 1950-53 Korean War should come first.

The war was ended by an armistice, not a peace treaty, meaning U.S.-led United Nations forces, including South Korea, are technically still at war with the North.

Chung said on Tuesday he wanted to discuss with Pyongyang officials ways to achieve the complete denuclearisation of the Korean peninsula.

Seoul would also continue to push for a joint declaration with the United States of an end to the Korean war this year, Chung said.

The North’s Kim made his first public appearance in 16 days to pay respects at the funeral of Dr. Ju Kyu Chang, North Korean state media KCNA reported on Wednesday.

Ju was a leading contributor to North Korea’s successful development of its nuclear weapons, ballistic missiles and space program, according to 38 North, a website that specializes in analysis of North Korea.

The United States wants North Korea to abandon its nuclear weapons without condition. North Korea has said in previous, failed talks years ago that it could consider giving up its nuclear arsenal if the United States provided security guarantees by removing its troops from South Korea and withdrew its so-called nuclear umbrella of deterrence from South Korea and Japan.

North Korea is preparing to celebrate the 70th anniversary of the regime’s founding on Sunday.