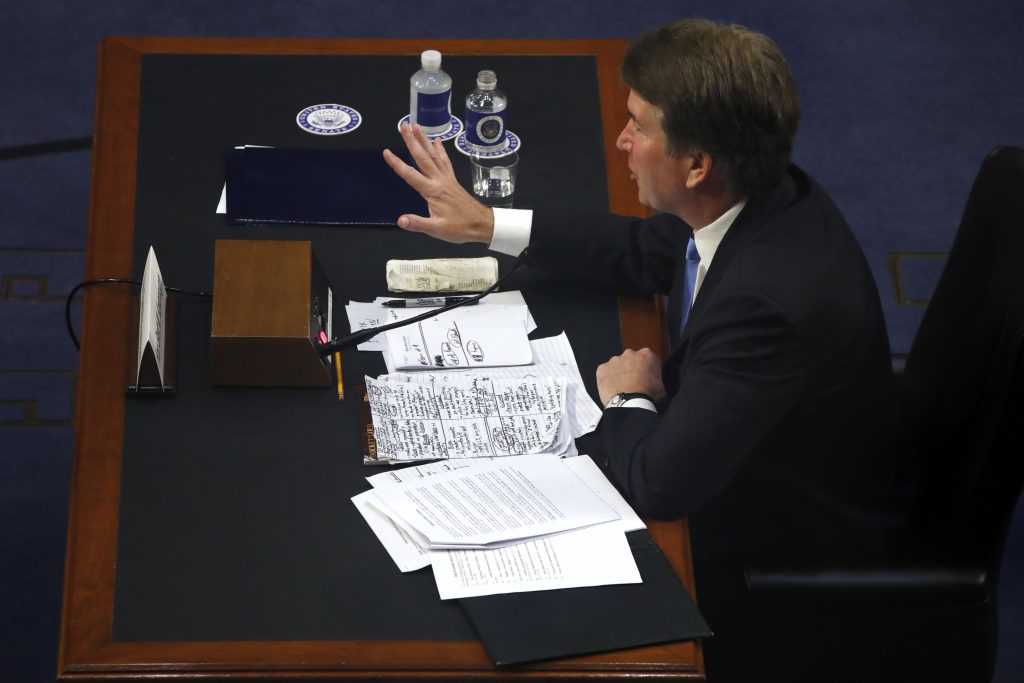 Supreme Court nominee Brett Kavanaugh repeatedly stressed the importance of judicial independence on the second day of his confirmation hearing Wednesday as he faced questioning from senators, including Democrats who fear he would be President Donald Trump’s man on the high court. But he declined to address whether Trump could be subpoenaed or could pardon himself.

Pressed by Judiciary Committee Chairman Chuck Grassley, a Republican, on whether he would be independent from the president who nominated him, Kavanaugh responded, “No one is above the law.”

But asked later by the panel’s top Democrat, Sen. Dianne Feinstein of California, whether a president can be required to respond to a subpoena, Kavanaugh said, “I can’t give you an answer on that hypothetical question.” The Supreme Court has never answered that question, and it is among the most important at Kavanaugh’s hearing since Trump could face a subpoena in special counsel Robert Mueller’s Russia investigation.

Kavanaugh also refused to say whether he thinks a president can pardon himself — or provide a pardon in exchange for a bribe, or pardon someone on the understanding that the person wouldn’t testify against the president.

“I’m not going to answer hypothetical questions of that sort,” Kavanaugh said, responding to questions from Sen. Patrick Leahy of Vermont.

Day two of Kavanaugh’s confirmation hearings began much as the first with protesters often interrupting proceedings. More than a dozen protesters hauled out of the hearing room shouting objections to Kavanaugh’s nomination.

Despite interruptions, senators plunged into their initial opportunity to publicly question Kavanaugh in what was expected to be a marathon day of examination.

The hearing has strong political overtones ahead of the November election, but Democrats lack the votes to block Kavanaugh’s confirmation. They fear Kavanaugh will push the court to the right, and that he will side with Trump in cases stemming from Mueller’s investigation of Trump’s 2016 campaign.

Addressing some of those concerns, Kavanaugh said that “the first thing that makes a good judge is independence, not being swayed by political or public pressure.” He cited historic court cases including Brown v. Board of Education that desegregated schools and U.S. v. Nixon that compelled the president to turn over the Watergate tapes — a ruling that Kavanaugh had previously questioned.

“That takes some backbone,” he said of the justices who decided those cases.

Asked about court precedents, the importance of previously settled cases including Roe v. Wade, Kavanaugh said, “Respect for precedent is important. … Precedent is rooted right in the Constitution itself.”

Kavanaugh noted that Roe was reaffirmed in a 1992 decision. He likened it to another controversial landmark Supreme Court decision, the Miranda ruling about the rights of criminal suspects. Kavanaugh said the court specifically reaffirmed both decisions in later cases that made them “precedent on precedent.”

Sen. Orrin Hatch, R-Utah, praised Kavanaugh for hiring female lawyers as his clerks as a judge on the District of Columbia court of appeals.

In stressing his independence, Kavanaugh pushed back against suggestions that after his time on independent counsel Kenneth Starr’s team investigating Bill Clinton in the 1990s, he no longer believes a sitting president should be investigated. He said his views did shift after the Sept. 11, 2001, attacks but his ideas about revisiting the special counsel law were merely suggestions.

“They were some ideas for Congress to consider. They were not my constitutional views,” he told the panel.

Pressed by Feinstein on his comment several years ago that U.S. v. Nixon might have been wrongly decided, he said his quote — shown on a poster above the senator — was “not in context” and “I have repeatedly called U.S. v. Nixon one of the four greatest moments in court history.”

The judge’s work in the George W. Bush White House also has figured in the hearing, particularly as Democratic senators have fought for greater access to his emails and other documents during his three years as staff secretary. Republicans have declined to seek those papers, and instead have gathered documents from his work as White House counsel to Bush.

Democrats, including several senators poised for 2020 presidential bids, tried to block the proceedings on Tuesday in a dispute over the records. Republicans in turn accused the Democrats of turning the hearing into a circus.

Trump jumped into the fray Tuesday, saying on Twitter that Democrats were “looking to inflict pain and embarrassment” on Kavanaugh.

The president’s comment followed the statements of Democratic senators who warned that Trump was, in the words of Sen. Richard Blumenthal of Connecticut, “selecting a justice on the Supreme Court who potentially will cast a decisive vote in his own case.”

The most likely outcome of this week’s hearings is a vote along party lines to send Kavanaugh’s nomination to the full Senate. Majority Republicans can confirm Kavanaugh without any Democratic votes, though they’ll have little margin for error.

One of several red-state Democrats watched as potentially voting for Kavanaugh, Sen. Joe Manchin of West Virginia, joined the hearing in the audience for a while. He is up for re-election this fall.

Republicans will hold a slim 51-49 majority in the Senate once Jon Kyl, the former Arizona senator, is sworn in to fill the seat held by the late Sen. John McCain.

Sens. Susan Collins of Maine and Lisa Murkowski of Alaska are the only two Republicans even remotely open to voting against Kavanaugh, though neither has said she would do so.