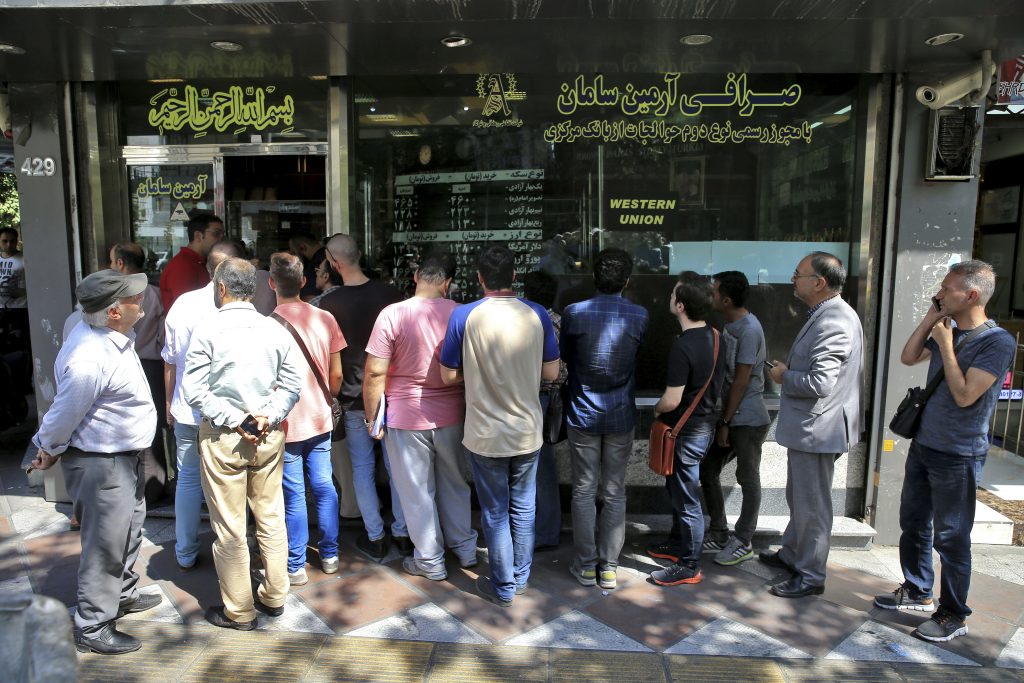 Iran’s rial fell to a record low on Wednesday as worried residents of Tehran lined up outside beleaguered moneychangers, part of a staggering 140-percent drop in the currency’s value since America pulled out of the nuclear deal only four months ago.

Those who went to work at the start of the Iranian week on Saturday saw their money shed a quarter of its value by the time they left the office Wednesday. Signs of the currency chaos can be seen everywhere in Tehran, where travel agents offer vacation prices only in hard currency and diapers have disappeared from store shelves — something acknowledged by the supreme leader.

Many exchange shops in downtown Tehran simply turned off their electronic signs showing the current rate for the U.S. dollar, while some Iranians who wanted hard currency sought out informal money traders on street corners. Exchange shops that remained open offered 150,000 rials to the U.S. dollar.

There was no immediate acknowledgement of the drop on state media.

Iran’s economy has faced troubled times in the past, whether from the Shah overspending on military arms in the 1970s or the Western sanctions following the 1979 Islamic Revolution and U.S. Embassy takeover. Drastic fluctuations in oil prices have also taken a toll.

This time, however, feels different. The currency has crashed along with hope many felt following the 2015 nuclear deal Iran struck with world powers, including the administration of then-President Barack Obama.

Iran agreed to limit its enrichment of uranium in exchange for the lifting of some sanctions. The West had feared Iran would use its nuclear material to build atomic bombs, while Tehran has always insisted its activities are purely peaceful.

In May, despite the United Nations repeatedly acknowledging that Iran had lived up to the terms of the deal, President Donald Trump withdrew America from the accord. He said he wanted stricter terms put on Iran that included limiting its ballistic missile program, curtailing its regional influence and forever limiting its nuclear activities.

While European nations say they want the deal to continue, America’s enormous influence in global financial markets led oil companies and airplane manufacturers to quickly withdraw from working in the country. Harsher sanctions loom in early November, including those targeting Iran’s oil industry, a key source of hard currency.

The Trump administration denies it is seeking to overthrow Iran’s government through economic pressure, but Iranian officials say the link is clear.

Ayatollah Ali Khamenei, Iran’s supreme leader, called the U.S. moves economic “sabotage” this past weekend, and specifically mentioned the diaper shortage. Some 70 percent of material for disposal diapers is imported. As the rial falls, it makes purchasing the material from abroad more expensive.

“Imagine that in Tehran or other major cities, baby diapers suddenly become scarce. This is happening, this is real, this is not make-believe. Baby diapers!” Khamenei said, according to a transcript on his official website. “This makes people angry. On the other side, the enemy wants people to be angry with the government and system. This is one of their ways.”

The head of the government’s budget and planning department told lawmakers Wednesday that authorities have allocated $13 billion for commodities and medicine, with another $6 billion to help the poor, according to parliament’s website.

Lawmakers dropped a plan for the distribution of subsidized goods directly to the people after budget head Mohammad Bagher Nobakht warned there would “be long queues in front of the shops, like money exchange houses, that can create an ugly scene in the city alleys and streets.”

Such lines could be seen Wednesday in front of money exchange shops near downtown Tehran’s Ferdowsi Square. The shops required those purchasing foreign currency to show their airplane tickets for travel abroad. Those without tickets were turned away, with many seeking out informal moneychangers, who discreetly waved wads of U.S. currency to signal their presence.

Those who were waiting cheerfully spoke to an American journalist visiting a city where weathered graffiti still proclaims “Down with the U.S.A.”

One young couple, who planned to soon be married, wanted to get hard currency to protect themselves against the market.

“We have some savings, and [the] value of our money is going down every day while the dollar’s price keeps going up,” said Sadjad, a 25-year-old who gave only his first name out of concerns about speaking publicly. “We figured we should buy some dollars to protect our assets.”

His 24-year-old fiancée, Fatemah, said even the price of her sought-after wedding dress kept changing.

“Unfortunately, every item we lay our hands on suddenly gets expensive,” she said.

“There is no glimmer of hope that the situation changes because everything depends on firstly the government’s policy to sort out this problem,” he said. “And we have up to now seen no kind of practical and effective way or solution on behalf of the government to solve this problem.”

As one man waiting in line for dollars at an exchange shop muttered with a smile: “It’s the land of confusion.”