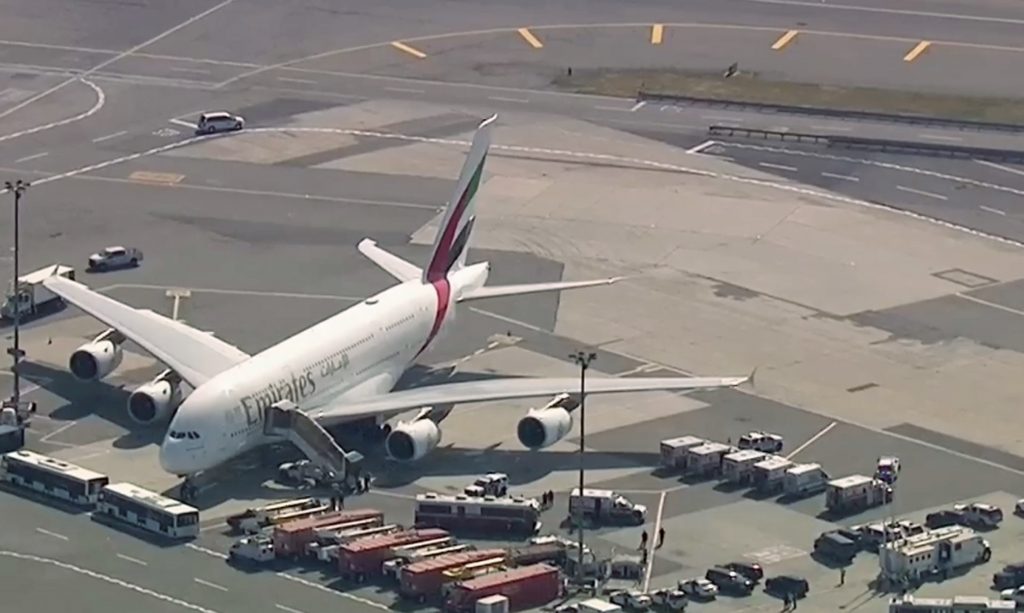 A commercial jet from Dubai prompted a large-scale emergency response at New York’s Kennedy Airport on Wednesday after a pilot reported that several passengers and crew members were complaining about having a flu-like illness.

The Emirates flight arriving at 9:10 a.m. with 520 passengers was swarmed by police vehicles and ambulances and immediately quarantined for an assessment by the U.S. Centers for Disease Control and Prevention. Passenger Erin Sykes posted video of officials wearing masks and gloves taking the temperature of passengers on the tarmac.

In an interview, Sykes said she saw a few passengers being taken off the plane first for medical attention, but she added that “many, many” others were showing signs of illness.

“Very intense coughing. Violently sick. Going into the bathroom a lot,” she said when asked to describe the scene.

By afternoon, there were still conflicting reports about how many people were sick and unanswered questions about the cause. The airline said about ten passengers needed medical attention “as a precaution,” while the CDC said about 100 of the 520 people aboard the plane were being evaluated after complaining of illness, including cough and fever. A spokesman for Mayor Bill de Blasio said ten people were hospitalized and another eight were being treated at the airport.

Video from news helicopters showed the jet stranded on the tarmac for several minutes before passengers began to emerge. Those who were cleared were put on buses to get to the terminal.

A traveler in the business section of the aircraft, Raghida Dergham, said in an interview that sick passengers were in a “lower level” economy section of the plane.

“I feel great. I feel fine,” she said. “Nobody was alarmed. … It was handled very well.”

But other passengers said they suspected that some passengers were sick before they got on the plane and that the airline should have done more to protect others.

“Why did they allow them on the flight? … I sat with them for 13 hours. If it’s a virus, we’re all getting sick,” Srinivasa Rao said.

“These people should know not to travel in a confined space with other healthy people,” she said.