It’s Not Simcha Felder, It’s Us! 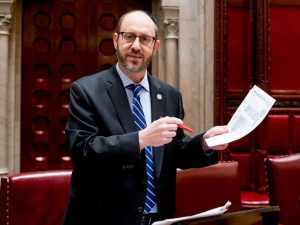 The headlines have taken dead aim and unless you have been sleeping, you know the Orthodox Jewish community is under attack — in the media, online, and, most dangerously, in the halls of government. Our Torah way of life is being challenged on many fronts. From attacks on eruv, shechitah, kapparos and bris milah to end-of-life issues, and now the outrageous assault on traditional yeshivah chinuch, our deeply held beliefs and customs are ever-more-frequently requiring exhaustive efforts to prevent government’s destructive meddling.

High tuition costs are severely impacting families across our community. State and local governments continue to balk at providing meaningful tuition relief to struggling private-school parents, thanks in large part to union-influenced politicians. Hot-button moral challenges are being forced upon our society by an energized, well-organized and growing progressive movement, with no reprieve in sight. Where are we?

With so much at stake, we must collectively be engaged in dealing with these dramatic changes happening in front of our very eyes. If these issues worry you (and they should), it’s time to stop complaining and time to start doing. We must vote!

Being remiss in civic duty is inexcusable in the best of times; in the present precarious state of local, national, and international affairs, it is unforgivable. We must not voluntarily silence our own voices. How can we make our feelings known and our voices heard at the highest and lowest levels of government? Voting changes the equation. In a democracy it is the great equalizer. The time to stand up is now.

Next Thursday, September 13, Orthodox Jewish voters in Boro Park and Flatbush have a unique opportunity to make our voices heard in a way that will resonate all across the state by re-electing Simcha Felder to the state Senate. Simcha is being challenged by progressive Democrat Blake Morris, who is unabashedly running on a platform to undo all of the good work Simcha has done for our community. Enhanced school busing, increased school security funding and assistance for special-needs families are just some of Simcha’s most recent accomplishments.

Most importantly, Simcha has been a fearless fighter and defender of our community in a state legislature that has been growing more unfriendly to our issues. Mr. Morris, on the other hand, is being supported by the same liberal progressive wing of the party that heralds far-left extremist candidates Cynthia Nixon for governor and Zephyr Teachout for attorney general. Proudly and unapologetically progressive, Morris, Nixon and Teachout are not supportive of Orthodox issues and all three should be strongly rejected by Orthodox voters.

After the shocking and unexpected defeat of Queens Congressman Joe Crowley by a socialist political neophyte, leftists all across the country have become emboldened and are actively looking for their next victim. Simcha Felder is being seriously challenged by those very same forces. Do not underestimate them. So important is this race to the far-left establishment that they have dispatched outside resources and dozens of volunteers to our community, with the sole mission of defeating Simcha Felder. We have the power and the votes to prevent that. It’s time to use it, or the ball game is over.

Knowing that it’s the week between Rosh Hashanah and Yom Kippur, Democrats and Republicans across the state will be carefully watching to see if Brooklyn’s Orthodox Jewish community shows up on Thursday to defend their state senator, or whether we are too busy to be bothered.

Make no mistake, this coming election is not only a referendum on Simcha Felder, but a direct challenge and threat to the Orthodox Jewish community that supports him. One of the most consequential actions our community can do at this important time is vote!

Gedolim of the previous generation mandated voting as a chiyuv of hakaras hatov. Re-electing Simcha Felder in this Thursday’s Democratic primary with a resounding victory will not only deliver a clear and unequivocal message that the Orthodox Jewish community cannot be bullied, but it will also show that our community rewards those who stand up and fight for us.

For our community’s future, we must come out and vote to re-elect Simcha Felder on Primary Day. The political world is watching.