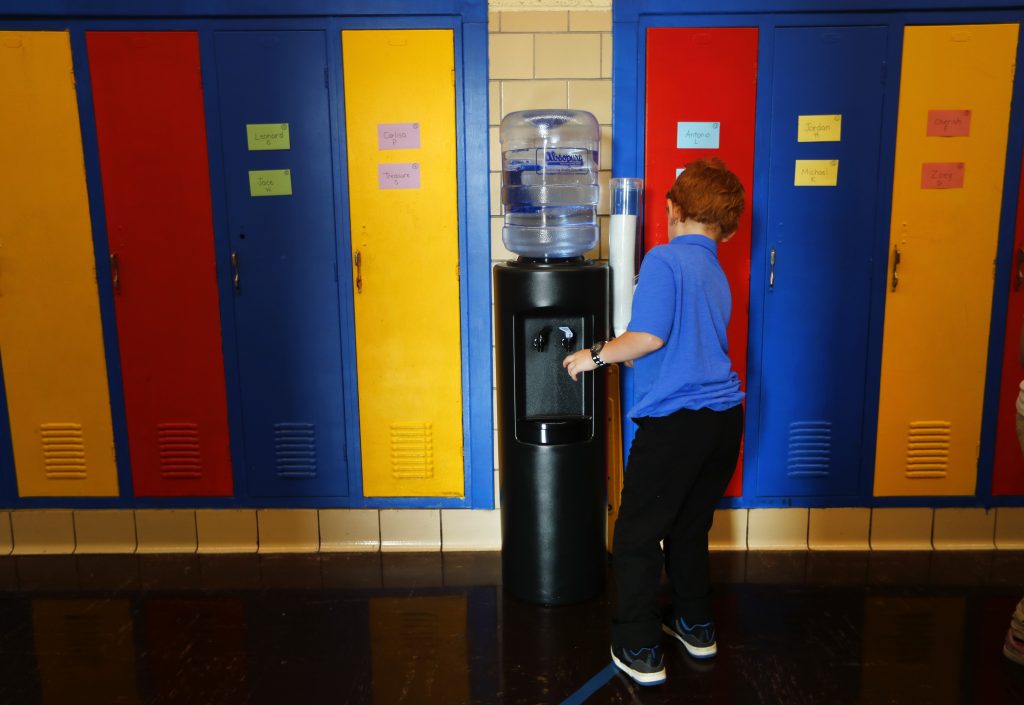 Some 50,000 Detroit public school students will start the school year Tuesday by drinking water from coolers, not fountains, after the discovery of elevated levels of lead or copper — the latest setback in a state already dealing with the consequences of contaminated tap water in Flint and other communities.

Detroit Public Schools Superintendent Nikolai Vitti expects the closure of water fountains and other drinking fixtures in all 106 schools to go smoothly because the district — Michigan’s largest — had previously turned off the tap in 18 schools. The coolers and bottled water will cost $200,000 over two months, after which the district probably will seek bids for a longer-term contract, he said.

Kids at the schools that already had coolers drank more than they ever had from the fountains, according to their principals.

“There has been an undertone of not trusting the water to begin with,” Vitti told The Associated Press in a phone interview Friday, days after announcing his decision. “With the water coming from the water coolers, they just trust it more and are drinking it more.”

Detroit is not the first major school district to switch to bottled water. The 49,000-student district in Portland, Oregon, turned off its fixtures in 2016 after a scandal over high levels of lead in the water at almost every school — a problem that took two years to fix. Fountains at most schools in the 80,000-student Baltimore districts have been shut off for more than a decade .

“I’ve been sending water to school every day with his name on it — five bottles of water in a cooling pack,” said Hardison, 39. “He was only allowed to drink that water.”

Water testing in Detroit schools should have started years ago due to aging pipes, said Ricky Rice, 61, who has a grandson in sixth grade and another grandchild beginning kindergarten.

Detroit’s move is being welcomed by experts and state lawmakers who say such voluntary testing should be mandated in school districts nationwide, only 43 percent of which tested for lead in 2016 or 2017, according to the U.S. Government Accountability Office .

“Somebody’s finally checking to see if the water’s OK and doing something about it,” said Thomas Lyon, a University of Michigan professor who studies water-quality issues.

While water utilities are required to check for lead, they focus on a sample of homes, which does not guarantee that all individual residences or buildings are lead-free. The entities that provide and distribute Detroit’s drinking water — the Great Lakes Water Authority and the Detroit Water and Sewerage Department — said it meets and surpasses federal and state standards, and the district’s problems are due to aging plumbing.

Vitti, who took over in Detroit in 2017 after the district had been under state management for years, said it is “preposterous” that schools are not forced to test for lead and that Detroit’s problems are reflective of inequities in urban America and a lack of spending on infrastructure.

“You can test the water coming into a building,” he said. “But if you’re not testing every water source — water fountains, sinks in bathrooms, kitchens — then you’re assuming that the plumbing linked to that particular water source is not producing elevated levels of copper or lead.”

Vitti ordered the testing of every water outlet in each school building last spring. It was a more expansive sampling than was conducted in 2016 — testing that came in the wake of the crisis in Flint, where the water source was switched under state management and not treated to prevent corrosion, enabling lead to leach from aging service lines and household fixtures.

Water-quality issues have been identified at some water outlets in 34 Detroit schools. Test results are pending for other schools.

Vitti said he is in no rush to turn the tap back on and that a long-term solution must first be identified.

Only eight states require lead-in-water testing in schools and Michigan is not among them. Republican Gov. Rick Snyder first proposed mandated testing in 2016 as part of broader changes outlined in the wake of the Flint crisis, for which his administration was primarily blamed . Democratic-backed bills have not advanced in the GOP-led Legislature, but a hearing held in June indicates they could come up again.

Rep. Stephanie Chang, a Detroit Democrat, said the inaction is disappointing given the serious health consequences of being exposed to lead.

“It only makes sense to test water on a regular basis in our schools and in childcare centers and in other places where there are vulnerable populations,” she said.