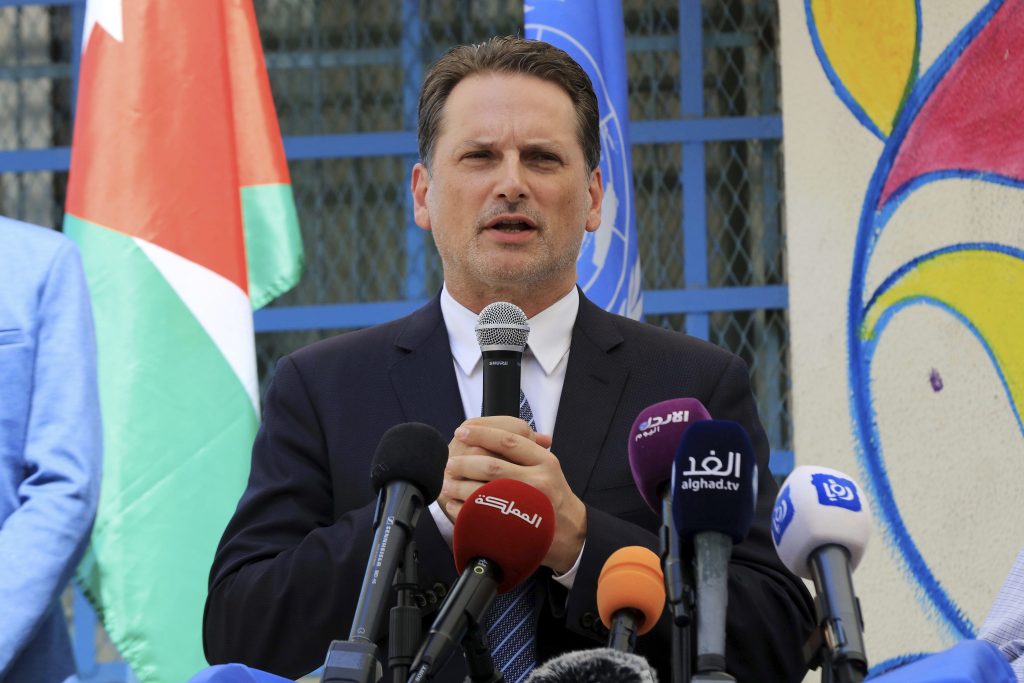 Millions of Palestinian refugees “cannot simply be wished away,” the head of a U.N. support agency said on Monday, hitting back at a U.S. aid cutoff and allegations its work only perpetuates their plight.

The United Nations Relief and Works Agency (UNRWA) provides services to about 5 million Palestinian refugees across Jordan, Lebanon, Syria, Yehudah and Shomron and Gaza. Most are descendants of some 700,000 Palestinians who were driven out of their homes or fled fighting in the 1948 war that led to Israel’s creation.

The growing refugee count was cited by Washington, UNRWA’s biggest donor, in its decision last week to withhold funding, and has potential ramifications for the Palestinians’ pursuit of a right of return to land now in Israel.

Successive Israeli governments have ruled out such an influx, fearing the country would lose its Jewish majority.

“I express deep regret and disappointment at the nature of the U.S. decision,” UNRWA Commissioner-General said in an open letter to Palestinian refugees and the agency’s staff in which he pledged its operations would continue.

Appearing to echo Israel’s view that descendants of the 1948 refugees should not share that status, State Department spokeswoman Heather Nauert criticized UNRWA on Friday over its “endlessly and exponentially expanding community of entitled beneficiaries.”

Israeli Prime Minister Binyamin Netanyahu described UNRWA on Sunday as “the refugee perpetuation agency” whose money “should be taken and be used to really help rehabilitate the refugees, whose real number is a sliver of that reported by UNRWA.”

But Krahenbuhl said “the protracted nature of the Palestine refugee crisis” was not unique. He said the children and grandchildren of long-displaced refugees in Afghanistan, Sudan, Somalia, Congo and elsewhere are also recognized as refugees and assisted by the United Nations.

“No matter how often attempts are made to minimize or delegitimize the individual and collective experiences of Palestine refugees, the undeniable fact remains that they have rights under international law and represent a community of 5.4 million men, women and children who cannot simply be wished away,” he said.

The United States paid out $60 million to UNRWA in January, withholding another $65 million, from a promised $365 million for the year. Krahenbuhl said Gulf states had injected funds but UNRWA still needed more than $200 million.

In Lebanon on Monday, UNRWA opened its school year as scheduled. Studies in UNRWA-run schools in Yehudah and Shomron and the Gaza Strip got under way on Wednesday.