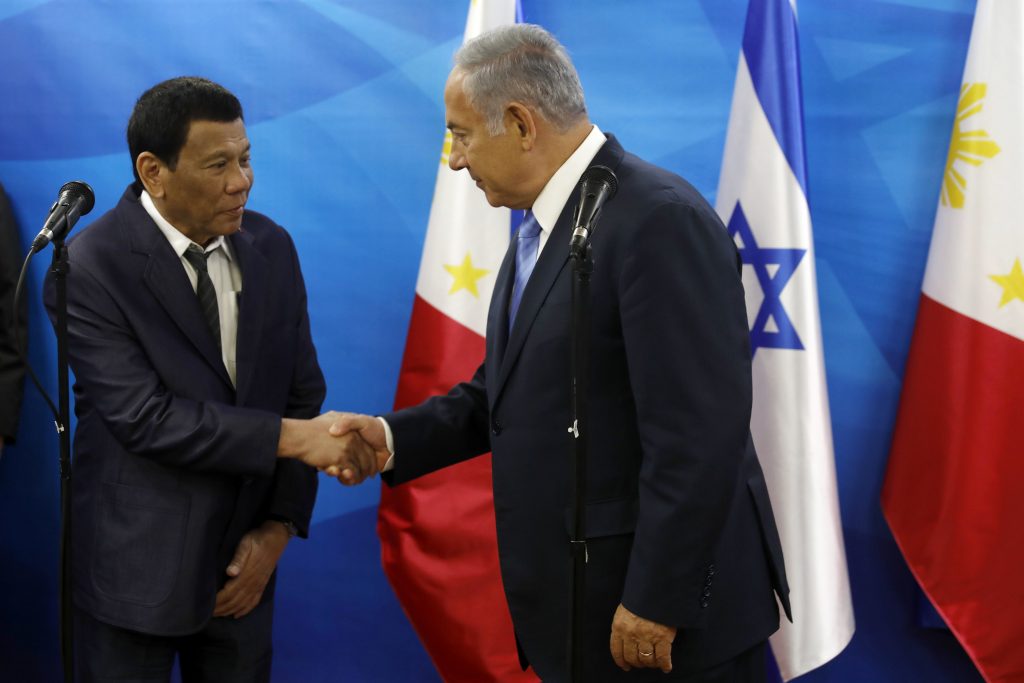 Prime Minister Binyamin Netanyahu extended a warm welcome to Philippine President Rodrigo Duterte on Monday at the start of an official visit. The two leaders oversaw the signing of three agreements in trade, science and caregiving. Netanyahu highlighted the countries’ long friendship, how the Philippines took in Jewish refugees after World War II and was the only Asian nation to vote for Israel’s establishment. He noted how in recent years Filipino health aides have assisted the elderly in Israel, including Netanyahu’s own father.

“We remember our friends, and that friendship has blossomed over the years and especially over the last few years,” Netanyahu told Duterte. “There has been a remarkable phenomenon in Israel where thousands and thousands of families have taken heart from the support given by Filipino caretakers for the elderly.”

Duterte thanked Israel for hosting some 28,000 Filipino workers and for assisting his country in its times of need.

The visit is the first by a Philippine president to Israel since the countries established diplomatic relations in 1957. Netanyahu has worked to cultivate allies in Asia, Africa and Latin America, where many countries have historically shunned Israel.

But Netanyahu has come under fire for embracing Duterte, whose forces are accused of killing thousands in anti-drug raids since he took office in 2016. Duterte drew outrage that year when he compared his anti-drug campaign to the Holocaust, and himself to Hitler, saying he would be “happy to slaughter” 3 million addicts. He later apologized.

Duterte visited the Yad Vashem Holocaust memorial in Yerushalayim and later visited a monument commemorating the Philippines’ rescue of Jews during the Holocaust.