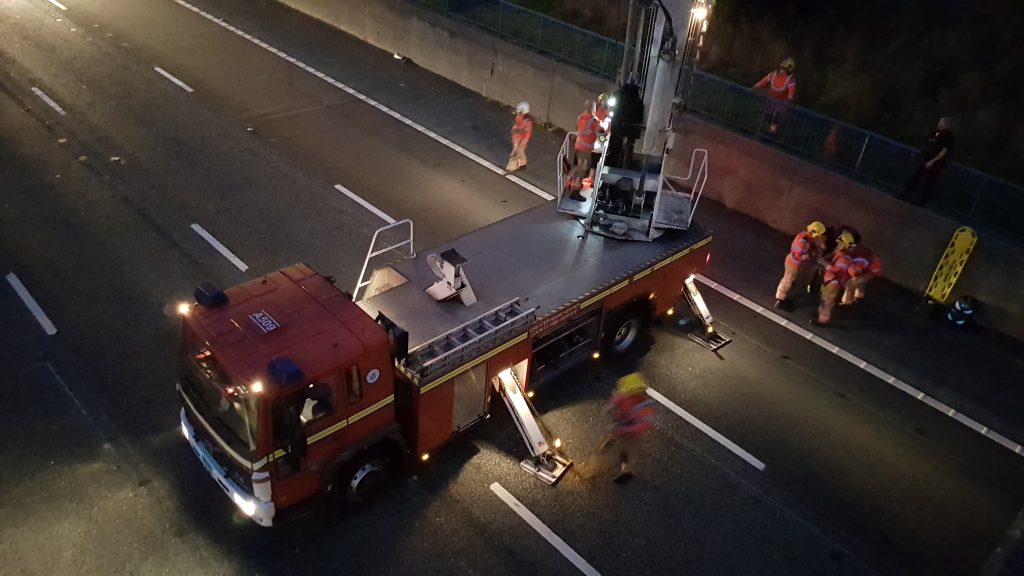 An impressive kiddush Hashem took place in Manchester recently. Shimi Liefman is a carpenter by profession. Together with his older brother they are both well-known figures in Manchester in various chessed activities. These include Chaverim, Misaskim and the chevrah kadisha.

Shimi recently completed the Ride4Bonim cycle marathon and as a result his brother Danny joined him on Sunday evening for another cycling ride in Prestwich. As they were crossing over the bridge spanning the M60 motorway, his brother providentially slipped.

While Shimi paused to help his brother, he was horrified to see a non-Jewish woman trying to climb over the safety fence in order to throw herself onto the busy motorway beneath. Shimi quickly called his brother and together they both tried to restrain her and to call for help.

The two brothers refused to despair and remained on the spot, saving the woman from falling to her death. The police arrived on the scene very shortly afterwards, followed later by the fire brigade. The motorway was immediately closed and within a short time the road was empty. While a police helicopter circled overhead, a hydraulic lift was brought under the bridge, and finally the woman was taken down to the ground. Ambulances were also present and she was taken to the hospital as a precaution.

The police were very impressed by the sense of responsibility shown by Shimi and Danny. The two had refused to ignore the distress of a stranger and had gone far beyond their call of duty. They both received a letter from the District Superintendent of Greater Manchester Police Bury District, thanking them for the pivotal help that they had provided for the police officers who attended.

In response, Mr. Liefman told Hamodia that he felt that his experiences in Misaskim and Chaverim, witnessing the results of tragedies r”l, had prompted him to take action. He had been quite overwhelmed with messages of support that he had received from total strangers who had heard on world-wide social media about his actions. Especially in our times, we need to create a kiddush Hashem in the world and give a good name to Klal Yisroel. He was very pleased to be able to demonstrate that Jewish people do not stand idly by when someone is in difficulties.