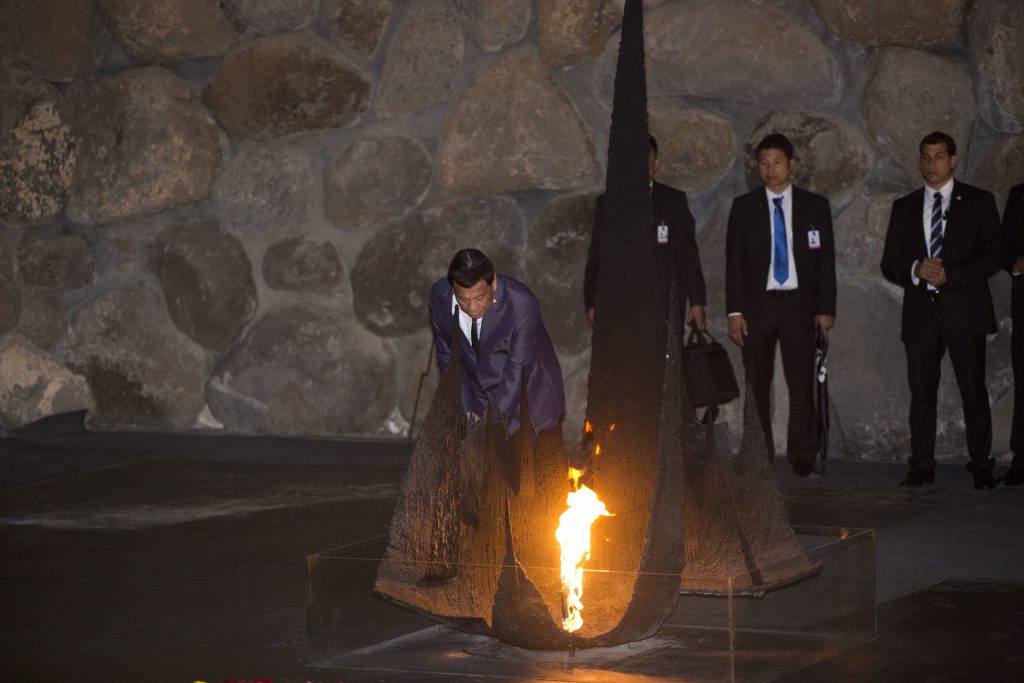 Philippine President Rodrigo Duterte, who once compared himself to Hitler, paid a solemn visit to Israel’s national Holocaust memorial on Monday, branding the Nazi leader “insane” as he lamented the Nazi genocide of an estimated 6 million Jews.

The comments marked a dramatic turnaround for President Duterte, who just two years ago had compared his anti-drug campaign to the Holocaust and said he would be “happy to slaughter” three million addicts. He later apologized.

Duterte, known for his profane outbursts and accused of committing widespread human rights abuses, spoke quietly and respectfully during his stop at the Yad Vashem memorial. He said the Holocaust should never be repeated and that “despots” have no place in the modern world.

“I could not imagine a country obeying an insane leader, and I could not ever fathom the spectacle of the human being going into a killing spree, murdering old men, women and children. I hope this will not happen again,” he said.

“There is always a lesson to learn: that despots and leaders who show insanity, they should be disposed of at the first instance,” he said.

Duterte, the first Philippine president to visit Israel, has received a warm welcome from the government, despite criticism that it is embracing a leader accused of rights abuses in his deadly crackdown on drug dealers. The agenda reportedly also is expected to include an arms sale to the Philippines.

Duterte and Israeli Prime Minister Benjamin Netanyahu oversaw the signing of three agreements in trade, science and care-giving. PM Netanyahu highlighted the countries’ long friendship, how the Philippines took in Jewish refugees after World War II and was the only Asian nation to vote for Israel’s establishment. He noted how in recent years Filipino health aides have assisted the elderly in Israel, including Netanyahu’s own father.

His visit is also to include a stop at a monument commemorating the Philippines’ rescue of Jews during the Holocaust.