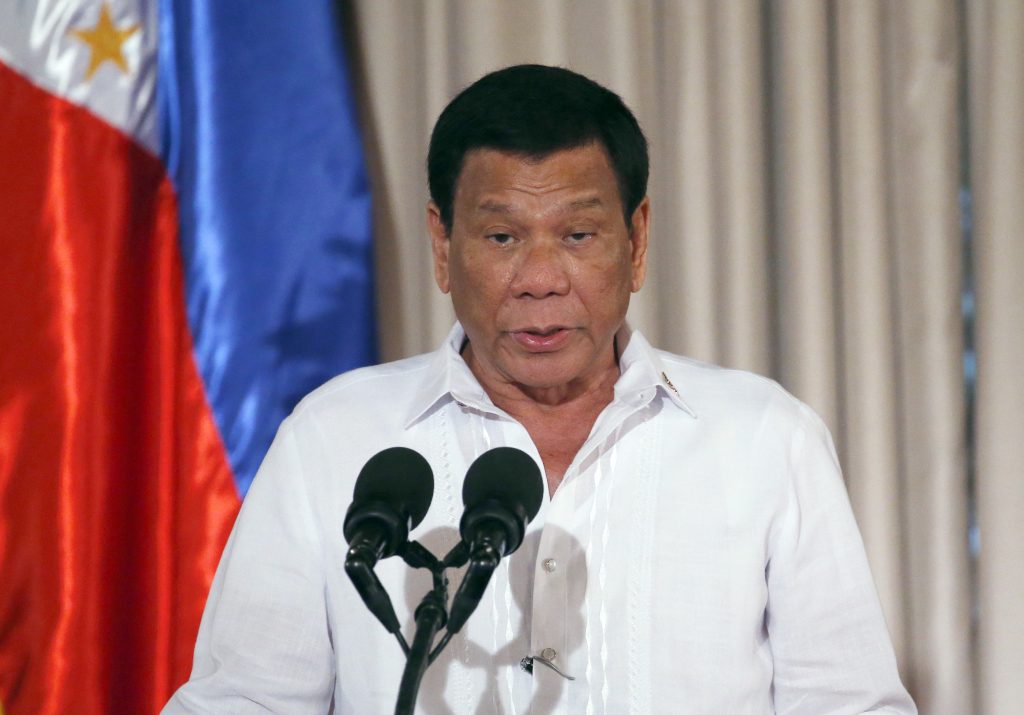 When Rodrigo Duterte makes the first visit to Israel by a president of the Philippines this week, officials on both sides will try to play down his record of jarring invective while promoting commercial and military ties.

Israel sees the four-day tour by Duterte and his top ministers as a chance to thank Manila for taking in Jews during the Holocaust and backing the Israeli independence campaign that followed.

Tourism, labor and defense deals are also on the agenda, cementing relationships between the Asian power and booming Israel, both historical U.S. allies.

Yet Israel’s government press office has said most of the visit will be closed to the media, an apparent precaution against faux pas by a president whose two-fisted crime-fighting tactics and rhetoric have raised hackles at home and abroad.

Some Israeli pundits have recoiled at his planned attendance at Holocaust commemorations.

In 2016, in a bungled reference to an opponent’s remark that his rise could be like that of Adolf Hitler, Duterte said he himself would be “happy to slaughter” drug addicts on the scale of the Nazi leader’s Jewish genocide.

While Duterte apologized for that, he has been dogged by accusations from activists that thousands of killings in his ongoing war on drugs were executions, which he rejects.

“There’s just no knowing what he will say from one moment to the next, so both sides want to keep this (Israel) visit as low-key as possible,” one official involved in the planning, and who asked not to be identified by name or nationality, told Reuters.

Aides say Duterte hopes to regulate labor relations with Israel, where between 24,000 and 28,000 Filipinos work, mostly as care-givers, and to promote Holy Land tourism from the predominantly Catholic Asian country which has been growing by 30 percent to 50 percent annually in recent years.

Establishing a direct air connection between Israel and the Philippines is in discussion.

Duterte also wants to improve security cooperation with Israel, which has sold the Philippines three radar systems and 100 armored vehicles, and which Manila is now eyeing for an aircraft deal. According to Israeli government data, exports to the Philippines were worth $143 million last year.

Duterte, who has kept domestic opinion on edge by hankering for retirement before his term ends in 2022, makes no secret of his personal disdain for Washington and its foreign policy.

Still, he shares Israeli Prime Minister Benjamin Netanyahu’s rapport with U.S. President Donald Trump. That has stirred modest hope in Israel that the maverick Asian leader might use his visit to announce recognition of Jerusalem as the country’s capital, as Mr. Trump did last December, outraging the Palestinians.

“We have been encouraging the Philippines on this (Jerusalem recognition), as we do with all countries,” one Israeli diplomat said. “We don’t know that Duterte will do it, but neither do we know that he won’t.”

Ernesto Abella, an official with the Foreign Ministry in Manila and a former Duterte spokesman, said the issue of moving the Philippine embassy from Tel Aviv to Jerusalem, as the United States did in May, had not been discussed.

Abella said the controversy around Duterte’s Hitler comments had been settled “way back”.

The Foreign Ministry in Jerusalem said in a statement that Israel “assign(s) great importance to this visit, which symbolizes the strong, warm ties between our peoples as well as the enormous potential for developing and strengthening the relations.”

Duterte arrives in Israel on Sunday and on Wednesday departs for neighboring Jordan.